People around the world have been launching red shells at AI drivers in Mario Kart Tour for some time now. It’s been nearly two months since the game launched, and we’ve raced through New York, Tokyo, Mushroom Kingdom, and Paris. Now it’s a good time for a retrospective on why Mario Kart Tour still manages to race on at the top end of both downloads and grossing lists around the world.

Let’s start with the obvious – the key reason for the mind-boggling number of downloads lies in the strong brand of Mario. Both Super Mario in itself and Mario Kart with its roster of Mario characters have built brand recognition and a fan-base over nearly four decades, which makes Mario Kart Tour worth checking out for a huge number of players. 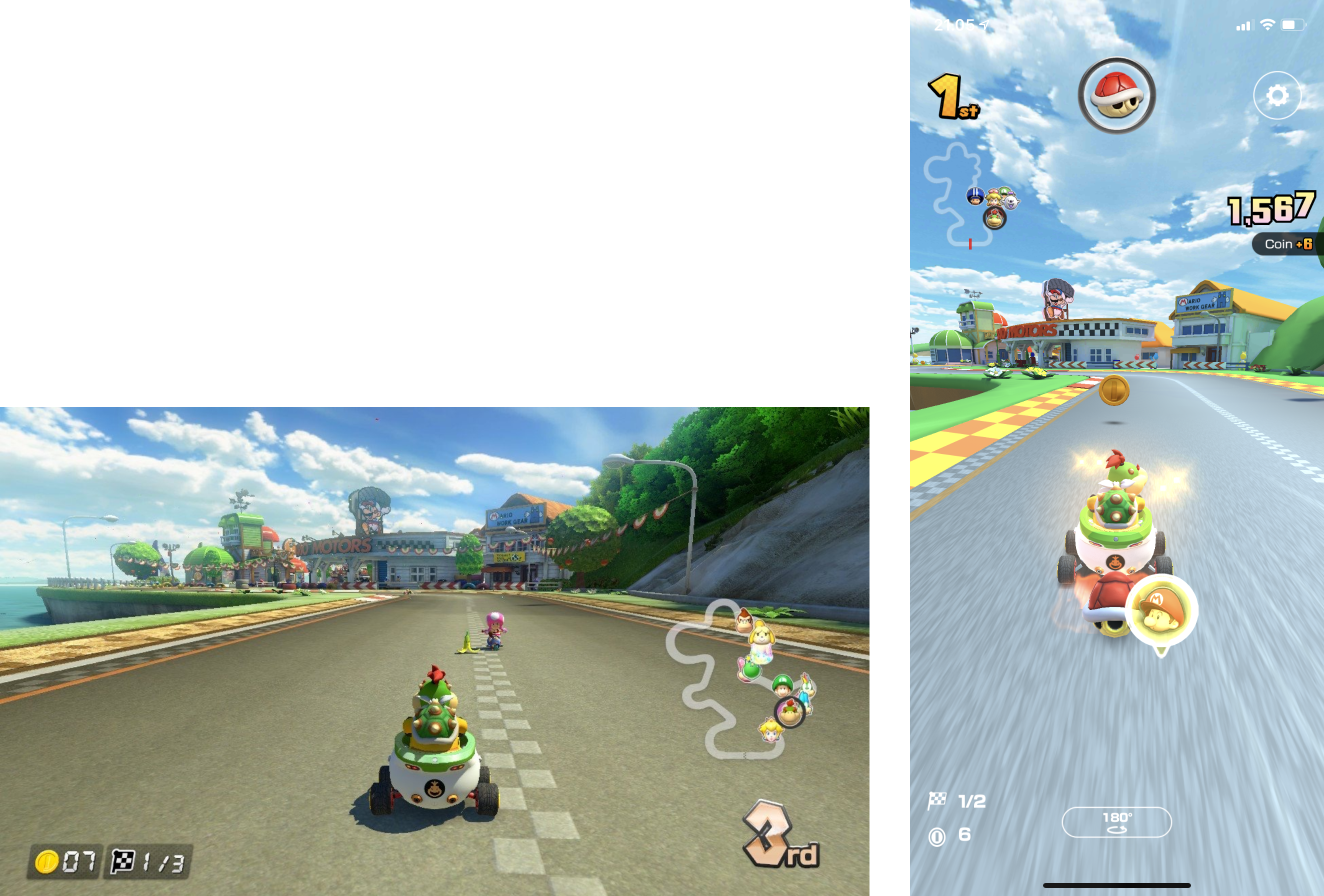 Comparing the level and character setup between Mario Kart 8 Deluxe on Switch and Mario Kart Tour on Mobile.

Once you get your hands on Mario Kart Tour, you immediately notice that the visuals and “look & feel” are what you’ve grown to expect from the Mario franchise. In other words, you feel right at home after other recent Mario titles, such as New Super Mario Bros, Super Mario Odyssey, and Mario Kart Deluxe.

Even though there are clear differences between console and mobile when compared side-by-side, it’s clear that Mario Kart Tour looks very much like it belongs to the Mario Family. Therefore, fans don’t feel alienated by too many changes (something that has wrecked many mobile adaptations in the past).

The power of the Mario brand has helped Mario Kart Tour’s strong performance in Grossing and Downloads, but the rather modest amount of features seems to be keeping it from the very top spots. And this leads us to what we at Gamerefinery do best: Analyzing features-sets of games.

2. Features, what works and what could be improved

Let’s take a quick look at some key features Mario Kart Tour has, what works and what feature-additions would unleash even more potential.

One of Mario Kart Tour’s key monetization features is the Gold Pass, a variation of the Battle Pass system. Players unlock rewards as they progress through the game race by race, but for the best rewards, players need to subscribe to the Gold Pass. The Battle Pass systems, in general, is a highly trending feature that has popped up in a wide range of mobile games recently, so it’s not a huge surprise that even Nintendo has embraced this subscription-based monetization mechanic. What is quite special though is that Mario Kart Tour has moved some rather major gameplay content (highest speed 200cc races) behind the Gold pass. And there’s more to come: in December, the much awaited multiplayer PvP will beta-launch exclusively for Gold Pass owners.

Another interesting feature in Mario Kart Tour is the complete overhaul of playable content every two weeks through “Tours.” With new characters, karts, and gliders coming in every Tour, there’s a sense of urgency to pull new shinies from gachas to reach your maximum potential in races. This sort of complete “fresh start system” of all the games content is rare in mobile games, even though many titles do similar things on a smaller scale through live event loops. 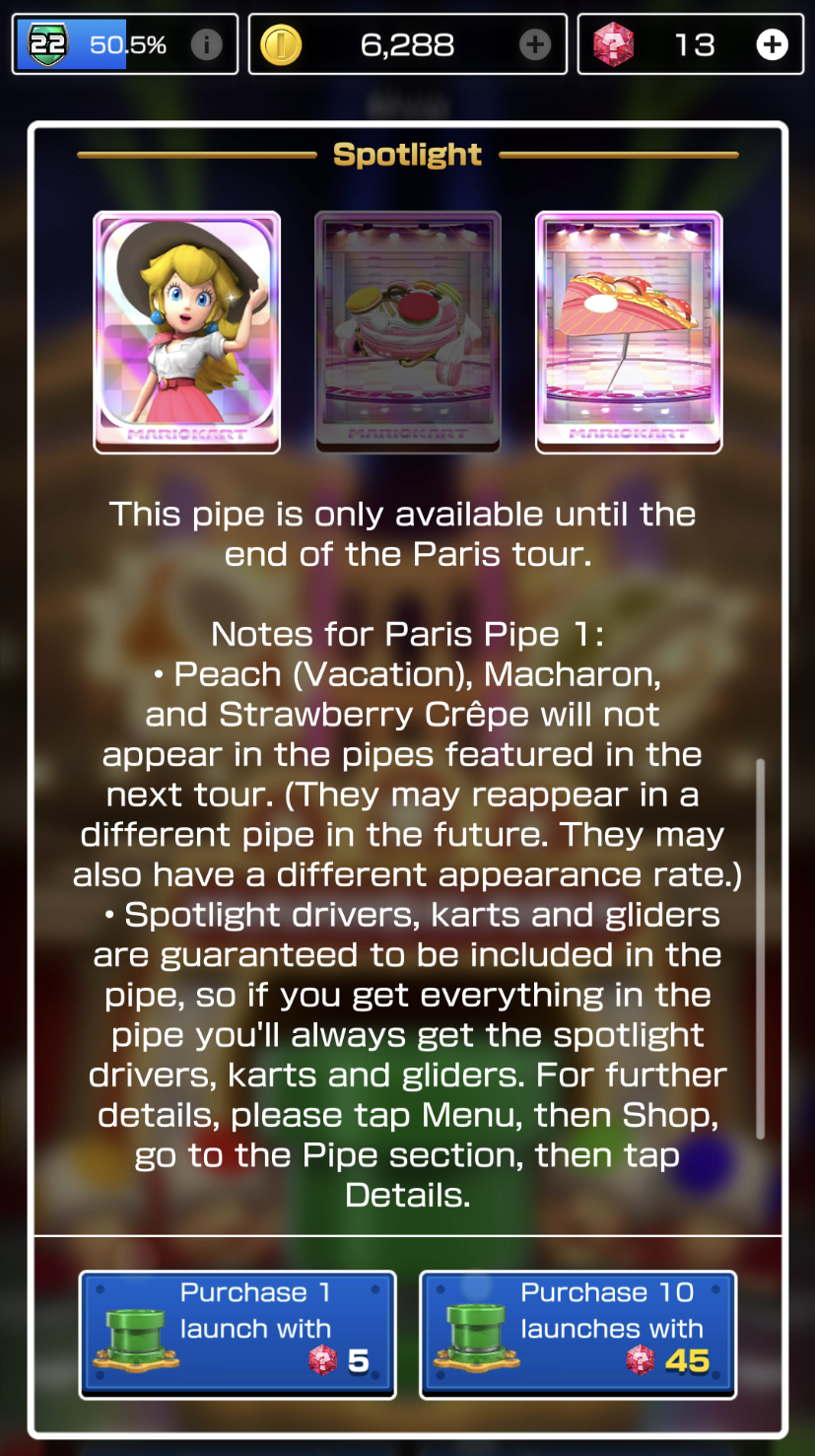 Mario Kart Tour guarantees you get the featured items if you pull 10 times the 10 item pull.

Western mobile gamers are no strangers to gachas today, but Mario Kart Tour brings a nice twist here with its special gacha mechanics. It seems like Nintendo prefers to have some sort of feeling of fairness in their gachas. For instance, another Nintendo title, Fire Emblem Heroes utilizes a gacha where you pull 5 character orbs to the board, and when choosing whether you want to continue after the first character, you can see what elements the remaining characters represent. Therefore, if you are after a specific featured character, you can choose to discontinue and spend your money better. This brings us to Mario Kart Tour, where you are guaranteed to get the featured 3 items at some point when clearing the gacha banner. Even if you had the worst possible luck, you’re guaranteed the featured set in 10 x 10 character/item pulls!

Mario Kart Tour has cups in which players participate in 3 races, and clear a special challenge. There are many different kinds of challenges available. For example, you might be asked to crush as many small Dry Bones as possible, compete in a 1-on-1 Boss Battle race against a massive driver, or even drive around a course filled with obstacles without crashing once. Over Halloween, the game even introduced Time Trials as an end of Cup challenge.

When looking at Mario Kart Tour’s current feature-set, a couple of additions come to mind that would take the game to the next level. Bringing new special playing modes would help in adding more “horizontal” content to the game and give players more racing options to choose from. This could be tied e.g. with the aforementioned Time Trials and events for maximum impact. Also, introducing a special event currency that would be needed for purchasing Time Trial exclusive drivers, karts, or gliders is something that many top grossing games utilize nowadays. As you’d get this special currency only by engaging in event (or other special) content, it would act as an incentive to actually participate in these instances and play more as a result.

The last and most obvious feature to add to Mario Kart Tour is, of course, actual synchronous multiplayer PvP. Fortunately it’s on its way and once implemented it will likely cement Mario Kart Tour at the top of the charts for a long time. We’re looking forward to trying out the Beta version once it launches in December!

Driving games have generally been pretty much non-existent in the US top grossing charts lately. CSR Racing 2 has had a nice run, but it’s arguably not a “real” racing game per se, with its focus on shifting gears at the right time, and players don’t get actually to steer their car.

Back in the early 2010’s mobile games (at least the casual ones) were simpler and easier to approach. During those times the endless runner genre was going very strong with titles such as Temple Run 2 and Subway Surfers maintaining very high top grossing positions. There are still a lot of players who love these games, but it’s clear that the genre, in general, has experienced a strong decline. 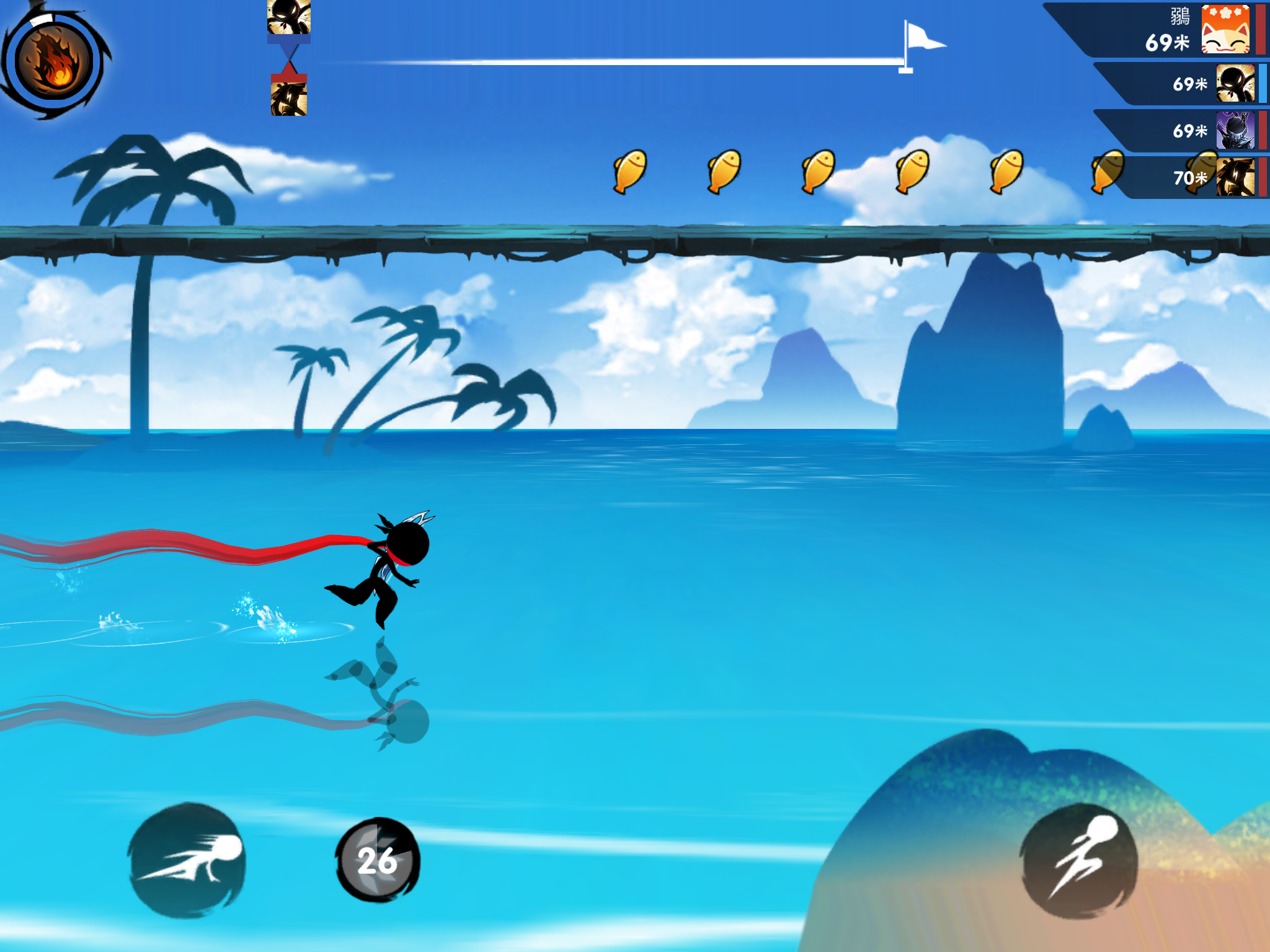 Actually, the Endless Runner genre itself is not dead; it has just migrated to other markets. For example, 忍者必须死3 ( Ninja Must Die 3 ) is happily running at the top of Chinese Grossing charts. Even in the west, there’s a clear demand for simple and easy to approach action-packed games when done properly (Archero, anyone? btw check out our post on Archero vs. Baozou Daxia) and Mario Kart Tour just might be tapping into that need.

This post is just a scratch on the surface of Mario Kart Tour with more data available through the Gamerefinery service. All in all, it’s fair to say that the brand of Super Mario and more specifically the Mario Kart series is what’s doing the heavy lifting in Mario Kart Tour’s current build. But with a little bit of digging and access to data other reasons for the game’s success can be found in a wider context. The team behind the game has really taken into consideration their potential audience and has kept the core gameplay simple, easy to approach, and entertaining. It will be interesting to see how far that combination takes Mario Kart Tour and how the game’s feature-set will evolve in the future!

Interested in digging deeper into feature-level data on mobile games like Mario Kart Tour? Then make sure to sign-up for the free layer of the GameRefinery service here!

Bam, Splat, Kapow: How to use Sound Effects to bring your Mobile Game to Life