Third-party brands and IPs have solidified their place in the mobile games industry, often providing (or at least promising) that crucial extra boost for your title. In the US, a whopping 30% of top 100 grossing games are currently based on a 3rd party IP, and when zooming out to the top 200, the figure holds at almost 25%. In other words, IPs play a significant role in mobile game revenue generation, and based on the variety of IP types utilized, there are license owners all across the board joining the party. 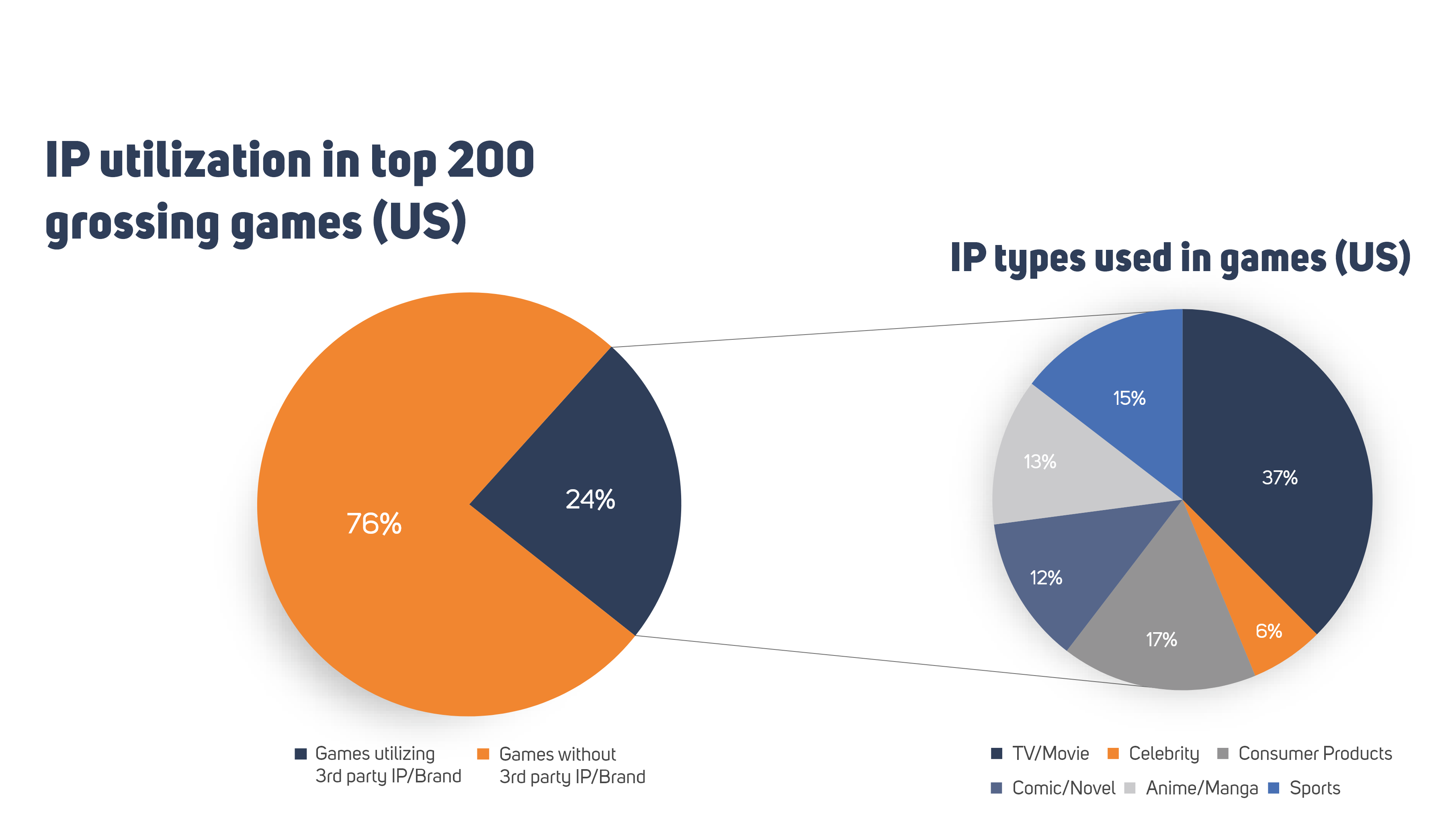 US top 200 grossing IP utilization from the GameRefinery Market Explorer

Looking at these figures, you might be tempted to think that slapping an IP on to your game would instantly shoot it to the starts and leave the competition in the dust. Unfortunately, it’s not quite that simple. Squeezing the most out of a licensed IP is an art of its own with several aspects affecting the outcome. Most importantly, mastering this art will significantly affect the ROI of your IP-licensing investment.

To keep this post focused and not turn it into a book, I’ve picked three key things that you might want to keep in mind when planning your next IP-based super hit. These points are based on our data and research we’ve conducted in the industry during the past years.

1. Some genres mix better with IPs than others

Not all game types are created equal when it comes to “IP-synergies.” In other words, the positive effect caused by an IP is greatly dependent on the game’s genre. For example, there have been (and are) numerous casual Match3 games riding well-known IPs of animated movies and pop icons. However, none of them have hit it big – even if the IP has matched the game’s target demographic audience perfectly. On the other hand, none of the top 10 grossing casual Match3 games are utilizing any 3rd party IP, and clearly, they are doing just fine. 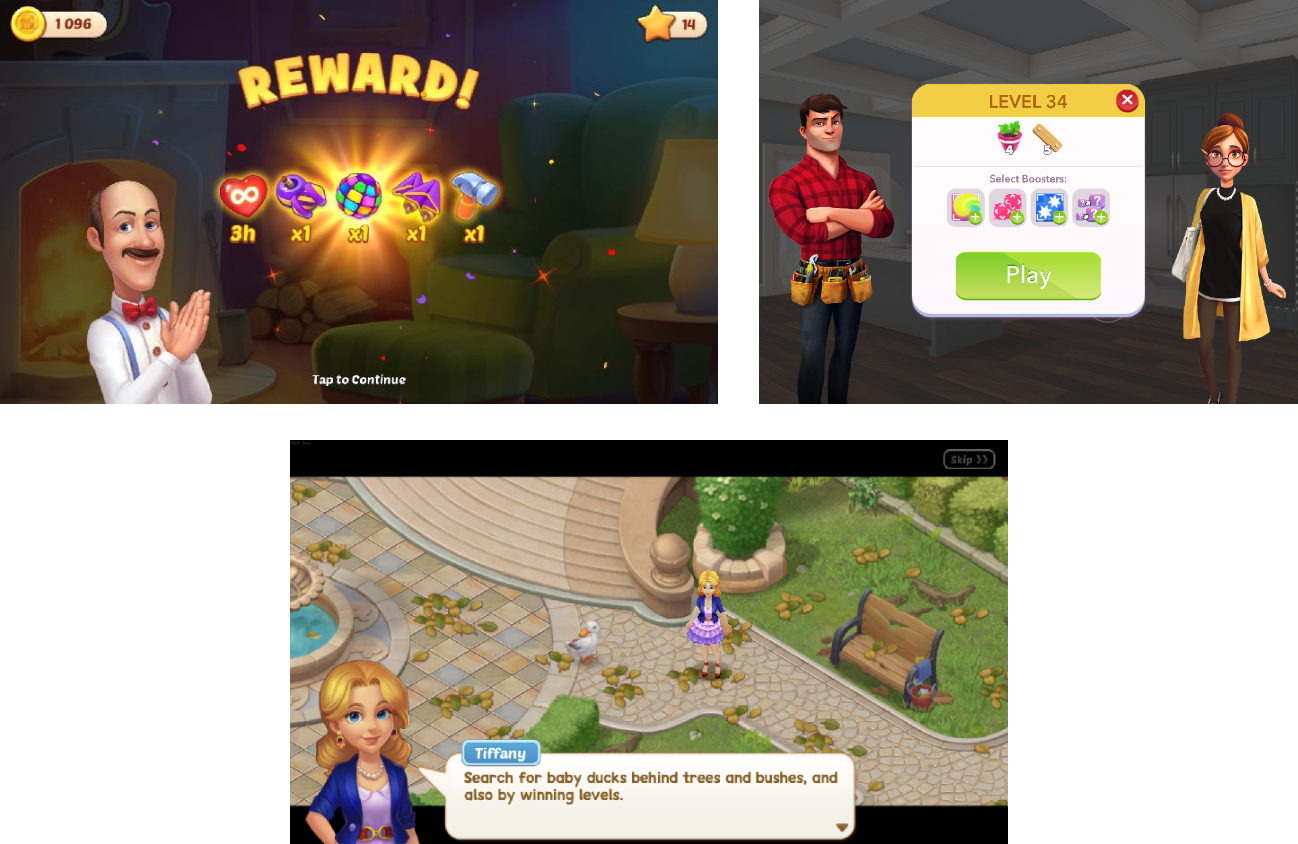 Homescapes, Home Design Makeover, and Matchington Mansion keep characters and storytelling on the sidelines – this reduces the need (and on the other hand, the benefit) of external IPs.

For comparison’s sake, there are plenty of mid-core RPG games based on 3rd party IPs that are raking in tons of money. And more importantly, the ratio of successful RPGs with IPs to those without is much higher than in other genres. This makes sense because IPs usually come with strong characters, stories, and/or lore elements that RPGs are naturally able to integrate as part of the gaming experience.

Endless grinding becomes more rewarding when you’re beefing up Luke Skywalker or pulling your favorite Marvel character from a gacha.

Another genre benefiting exponentially from IPs is Location Based games, which usually revolve around strolling around (in real life) searching for encounters or completing tasks. When taking this core game experience into account, it’s easy to see how a well-known IP with established lore can make wandering around your neighborhood an addictive experience. Therefore, it’s no surprise that the top three Location Based games in the US are all based on a hugely popular IP. 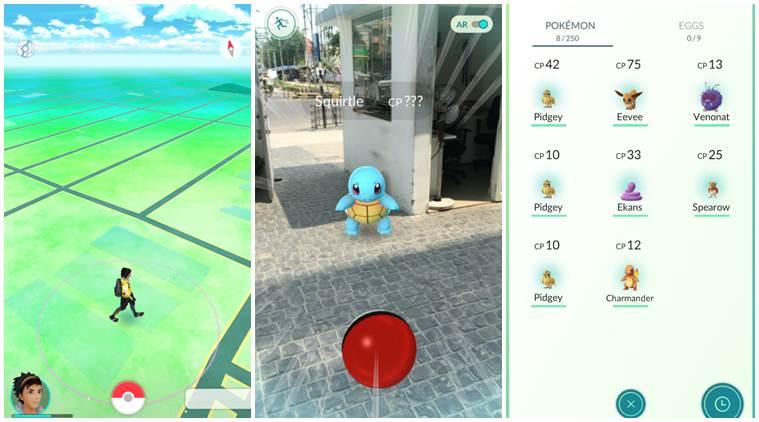 The point here is not that some genres won’t benefit from 3rd party IPs at all. Therefore, when thinking about licensing, ask yourself whether or not that IP will bring the benefits it’s supposed to if you’re working on, for example, a hyper-casual game.

As mobile games industry revenue has skyrocketed, large IP-owners from “traditional” industries have swooped down for the spoils. As a result, licensing opportunities are rather plentiful. With this ample supply of IPs to use (at least for the bigger publishers), it’s not always easy to find the right one for your game design. We’ve already discussed how other genres are more suited for IP integration, but even with these “IP-synergetic” genres, the fit isn’t always guaranteed. What you need to ask yourself is how well the IP you’re licensing supports your game’s feature-set.

For example, RPGs with a heavy focus on character collection & development features are much better off with an IP that comes with a wide range of distinguishable heroes and villains. Even better if they’re tied together by rich background lore. This way, your meta and core layer features are aligned with and supported tremendously by the IP. If you decide to go with an IP that lacks the things mentioned above, it won’t reinforce your game’s feature-set in a meaningful way. In all likelihood, this will lead to sub-optimal results. 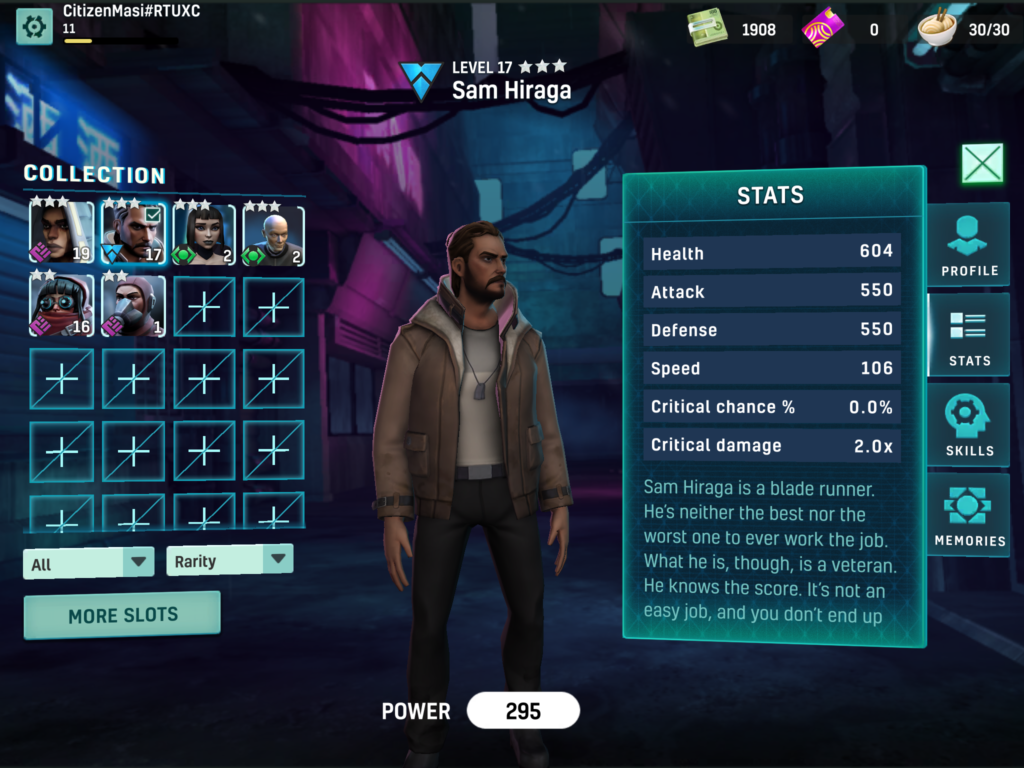 Blade Runner is a great movie, but it doesn’t boast dozens of memorable characters. As a result, Blade Runner Nexus is likely to face challenges building up a diverse enough character roster for an RPG title.

Comparing Pokemon GO and Harry Potter Wizards Unite in this manner is interesting. At first glance, the similarities are clear: both these Location Based games are backed by huge IPs packing plenty of lore, characters with rich backgrounds, and recognizable monsters of all shapes and sizes. However, there’s one key difference between these two titles: Pokemon GO has lots of characters to collect, develop, and even battle with, whereas Wizard Unite doesn’t. Instead, you’re searching for inanimate items (“Foundables”) to fill up your collection album. The game’s setting does its best to explain this, as you’re playing a wizard trying to find magical objects scattered around our “muggle” world. The approach makes sense from the perspective of the Harry Potter IP. After all, It’s not like Harry was looking for dementors and other monsters, trying to “catch ’em all .” But this game design decision doesn’t really support a character collection & development-oriented feature-set, which would arguably create a more solid foundation for a Location Based game.

3. Demographic fit of IP and game mechanics makes all the difference

This third and final point touches probably the most obvious effect of brands and IPs in games. When you decide to go down the path of licensing, you’re pretty much locking down major aspects relating to story and art elements. This reflects on your title’s demographic appeal, which in turn is something to keep in mind when designing your feature-set (and choosing the game’s genre).

If the IP you are sticking with doesn’t fit the demographic appeal of your game mechanics & genre, the outcome probably won’t shoot through the charts. In other words, it’s not enough that you have an “IP-synergetic” genre like RPG or Strategy. Not even if the IP supports your feature-set with, for example, lots of characters backed by rich lore and story elements. The IP should also appeal to people who enjoy your title from a purely game-play perspective. This is not to say that a Harry Potter 4X strategy game will fail with 100% certainty. However, it’s not easy to find players who love all things Hogwarts AND can’t get enough of extremely aggressive & complex 4X gaming. So even if the IP integrates well with your game design and features, make sure it also appeals to the same people who enjoy the game-play. 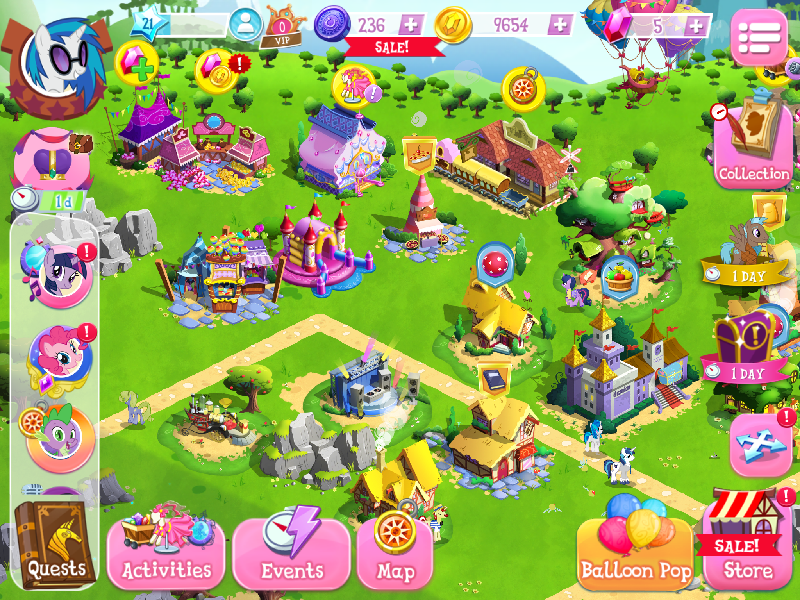 My Little Pony is a serious enforcer of happiness, love, and dashing pink. However, not all games or gamers could inhale this much cuteness without breaking down to shambles.

IP vs game mechanic mismatch is especially dangerous if the IP clearly appeals to casual audience but the game design is all about mid-core, i.e. heavy meta game elements and complex UI/UX. This leads to a situation where your casual player base has a hard time getting its head around the actual game while the mid-core audience gets turned off by the IP. As a result, your KPIs will face some serious pain.

One example of this challenging mix is Disney Sorcerer’s Arena (tactical battler by GLU games), which combines casual Disney IP with mid-core game-play & meta elements. Here’s the problem: even though DSO has a huge roster of well-known characters to collect/play with, the mid-core tactical battler audiences are not likely to find Mickey Mouse or Ariel as appealing as Iron Man or Black Widow of the Marvel Universe. In other words, for these people, the IP is likely to act as a deterrent – not a retention driver. On the other hand, the people who’d love to collect Disney characters would probably engage more with a bit simpler game-play mechanics.

Over the past years, 3rd party IPs and brands have established themselves as an important (and visible) part of mobile gaming markets. Therefore it’s now more important than ever to know how to use them effectively for optimal results.  In this post, we’ve covered three key aspects worth considering when using a 3rd party IP to boost your game’s performance.

1. IP vs. genre fit => when thinking if you should invest in a 3rd party IP, keep in mind that certain genres work better with (and get more out of) IPs than others

2. IP vs. feature-set fit => If you decide to utilize an IP to boost your game, make sure the IP supports your game’s feature-set

3. Demographic fit of IP vs. game mechanics =>As IP greatly affects the style and “soul” of your game, it’s crucial that the IP’s demographic appeal matches your audience’s preferences from a game-play perspective.

As many of you have already noticed, these three dimensions are connected, so keeping an eye on the whole mix is crucial. Only when all the pieces of this puzzle are matched and support one another, you can expect good results. If, on the other hand, the IP vs. product integration is not thoroughly thought out and executed, the outcome is likely to be far from optimal.