Social elements are one of the cornerstones of today’s mobile games. Having a sense of community and playing together with other people keeps players coming back to the game, playing an important role in driving retention and player loyalty. Through this emphasis on “communal playing,” guild mechanics (also known as clans, teams, alliances, etc.) have cemented their status as the number one method of bringing players together — guild mechanics bringing more depth and co-op elements to the social dimensions of games. In this blog post, we’ll look at how guilds are finding their way into casual games.

Guilds act as a hub or foundation enabling the introduction of other social features, for example, donating/borrowing, co-op playing, communal goals to complete together, guild wars/competitions and so on. But first and foremost, guilds help players find communities — people with similar playing styles, interests, and levels of engagement with the game.

Traditionally, guild mechanics have been a “must-have” feature in many midcore genres, such as strategy and RPG games. Casual games have, however, tended to avoid them, relying on much lighter social elements. For example, just sending lives/gifts to friends and comparing your high scores with other players. However, now the tide seems to be turning, and casual games have started to adopt guild mechanics at an increasing pace. 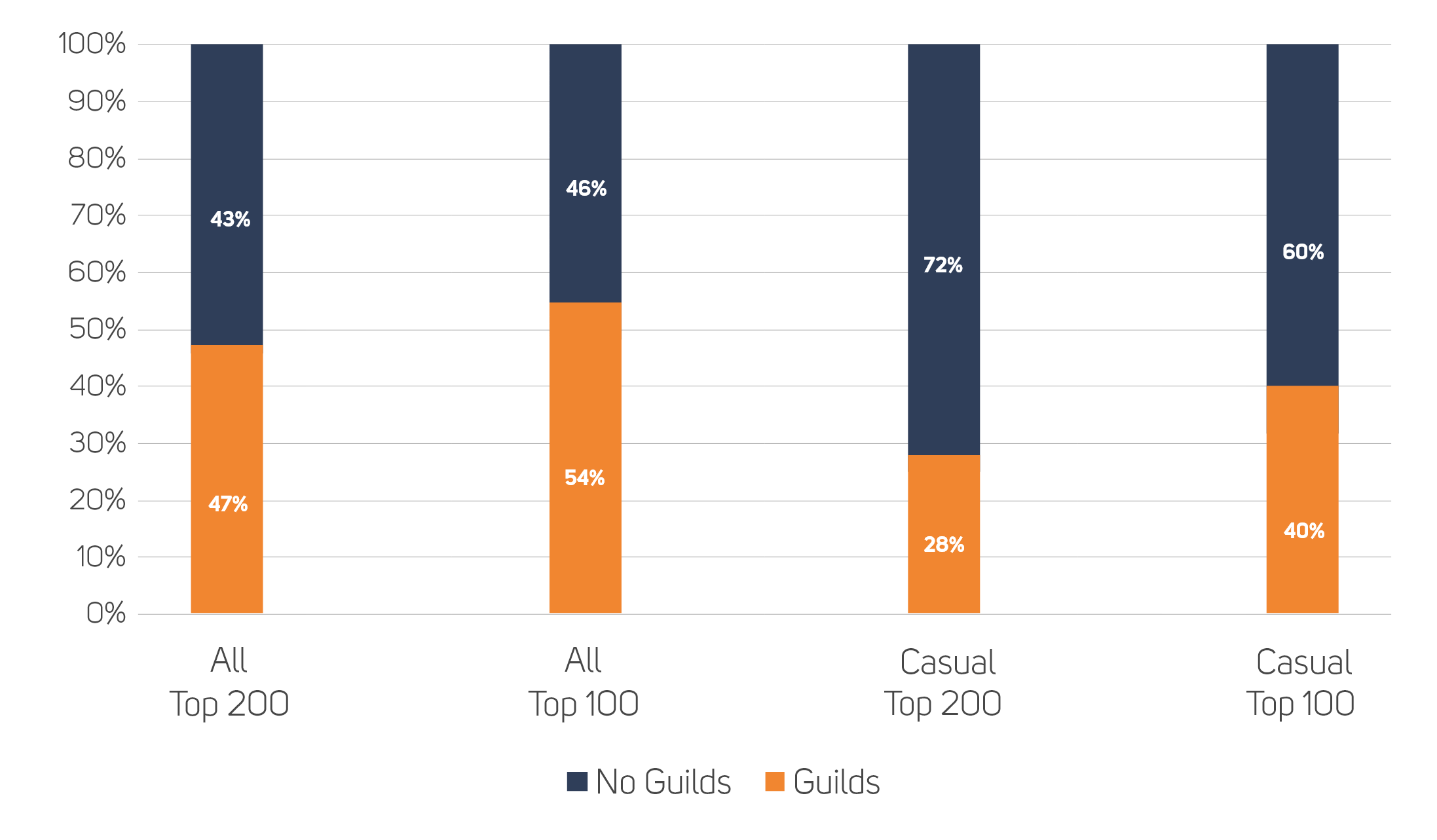 The chart above illustrates how guild mechanics are a popular feature in all genres these days, but when looking at casual games alone the rate of adoption drops quite drastically. We can see that guilds become a more popular differentiating feature at higher grossing ranks, becoming more common in the top grossing 100 vs. 200.

Although still not common, guild mechanics have seen a significant increase in adoption among casual games. And particularly among top match3 games, such as Playrixes Homescapes, Gardenscapes and now Fishdom.

Casual games usually have guild features introduced in stages. The “foundation” for guild features is introduced first, typically with quite a simple implementation. This is followed by an update a few months later that brings more in-depth co-op features, such as co-op tasks and guild tournaments.

Step 1: Laying down the foundations

When guild mechanics are introduced for the first time, it usually has a lighter implementation with just a chat and send/ask help features. This serves as a foundation for expanding the social elements of the game and gives time for the player communities to form.

Homescapes released guilds first with chat and a simple send/ask help feature where members could send lives to each other. Players were then rewarded with the main soft currency for doing so. 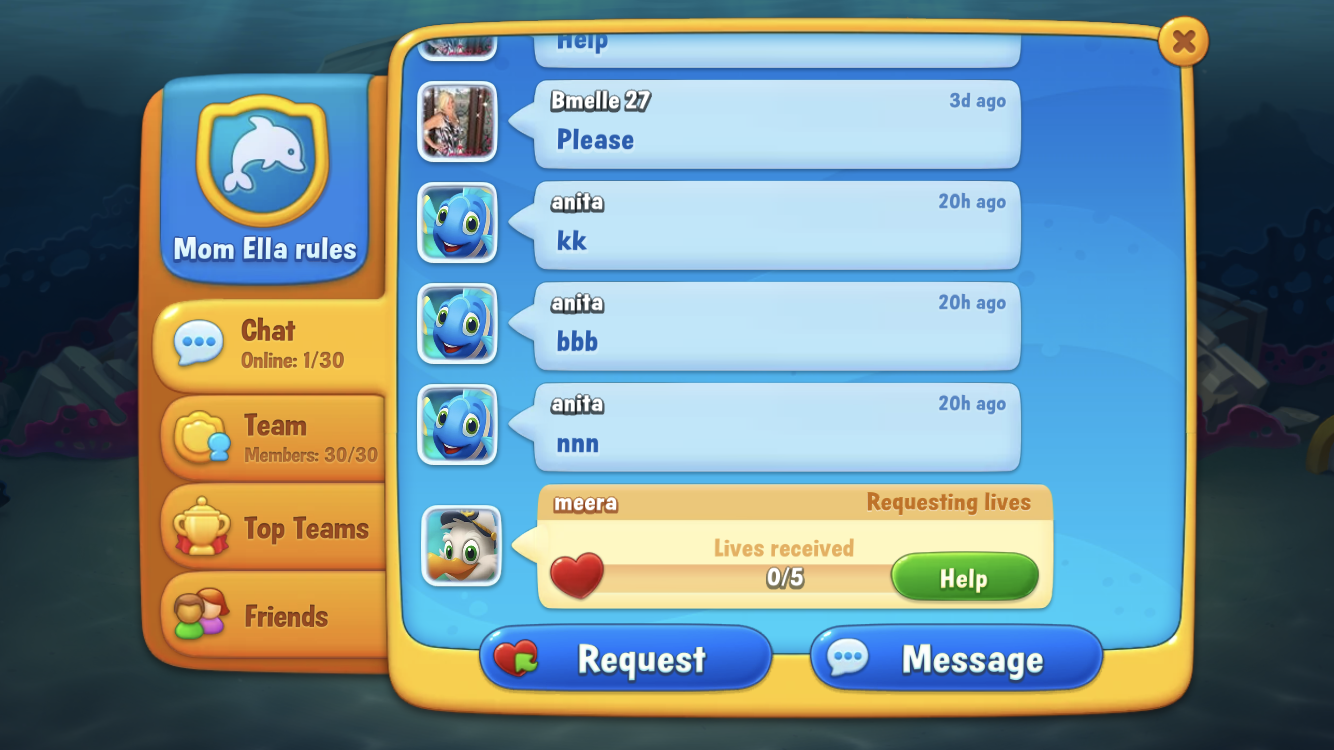 Fishdom recently got its own guild mechanic as well, which is almost identical to Homescapes’ guilds.

The way Yahtzee with Buddies Dice brought in its guild feature was similar, but with a send/ask help feature that has a bit more depth by allowing guild members request items. 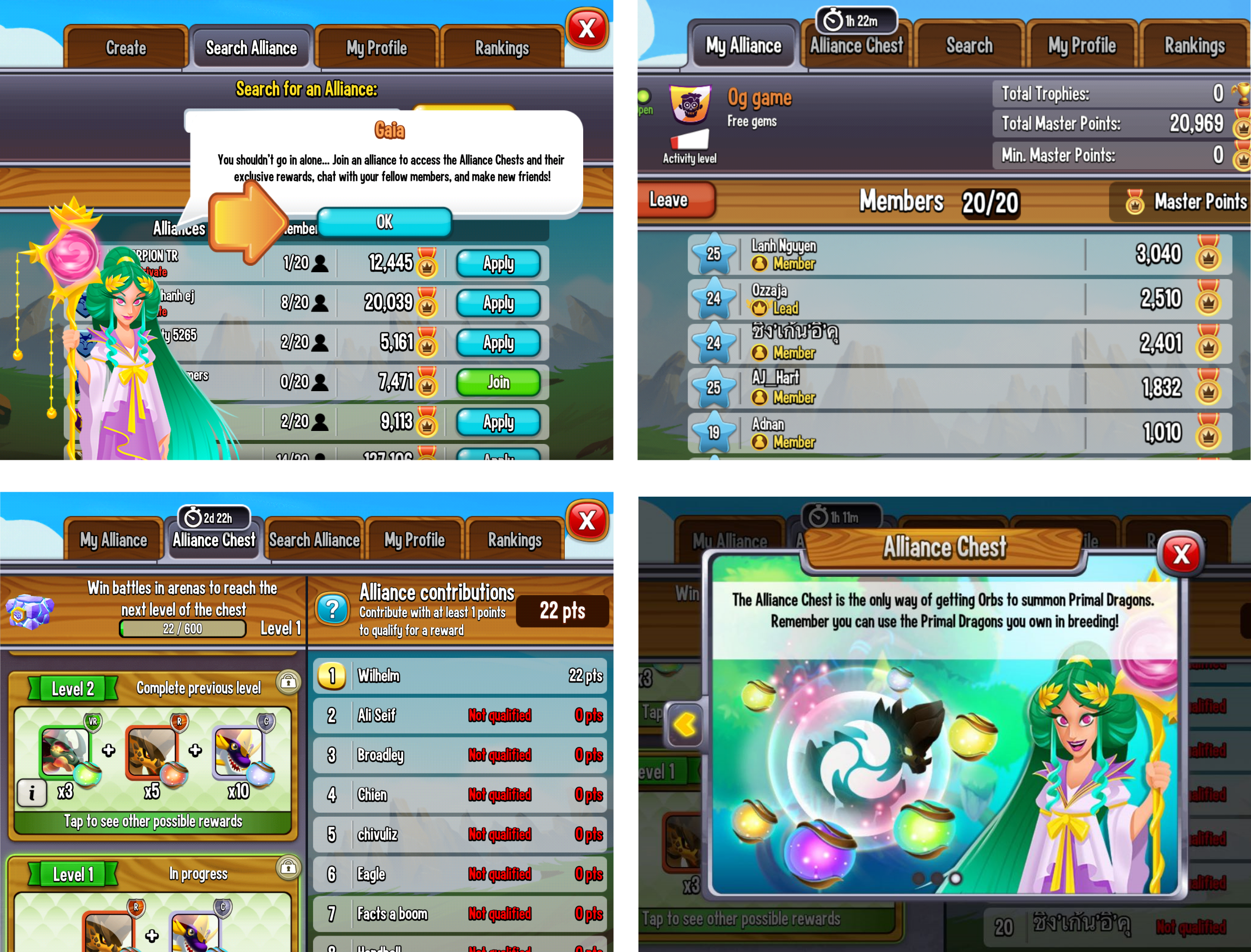 Dragon City Mobile added guilds together with a co-op task feature Alliance Chest. In Alliance Chest guild members complete different tasks to increase the chest’s level for better rewards. The chests are, for example, the only way in the game to get special Primal Dragons, so players are heavily incentivized to participate.

After introducing the “foundation” for guilds, deeper guild related features follow a few months later. These updates tend to include various co-op features such as tasks or competitive guild tournaments. 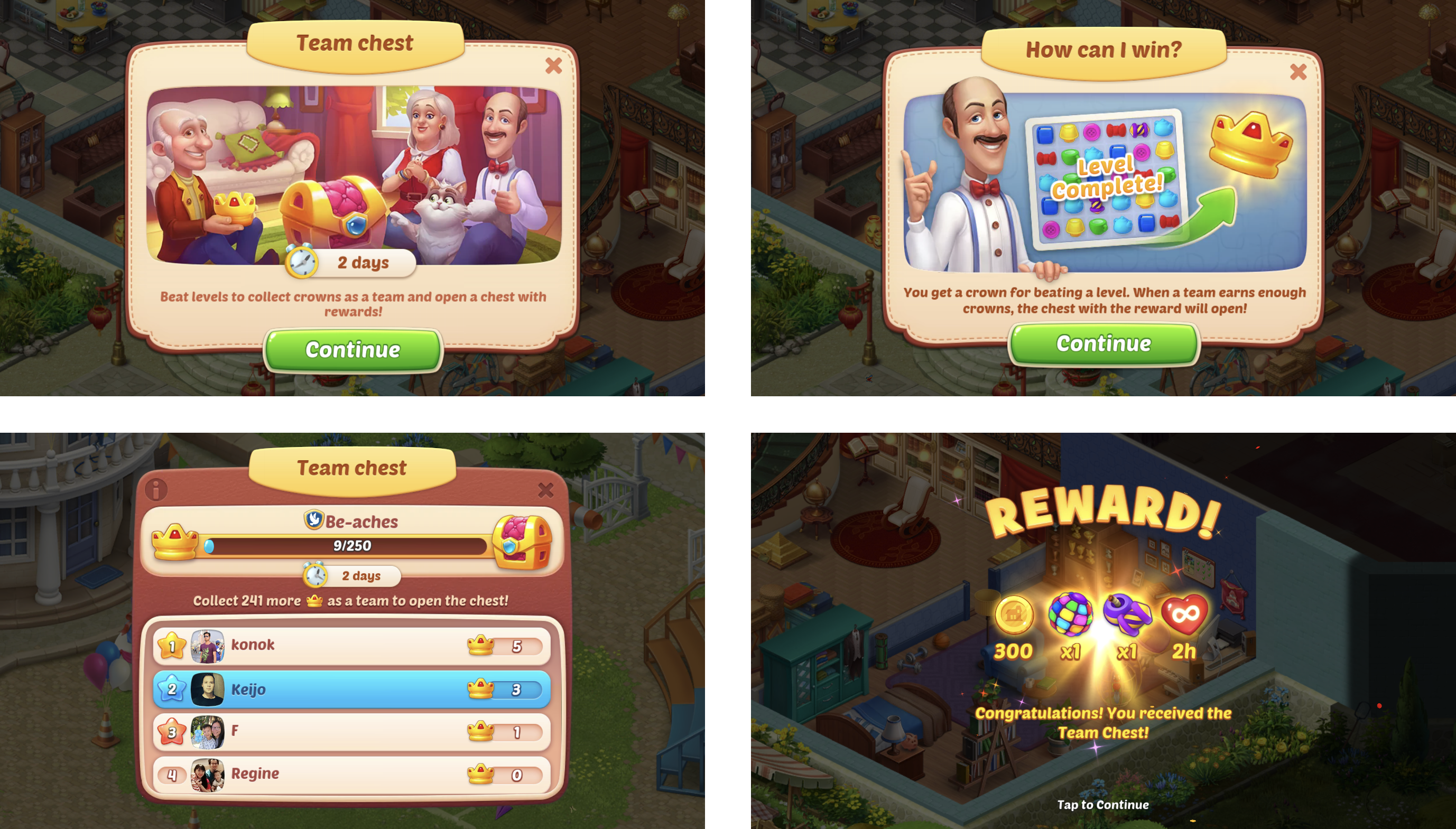 Homescapes added a Team chest event that is a co-op guild task where members must beat levels to gain crowns (“points”). These points fill a communal pool, which then unlocks the team chest rewards for the whole guild. 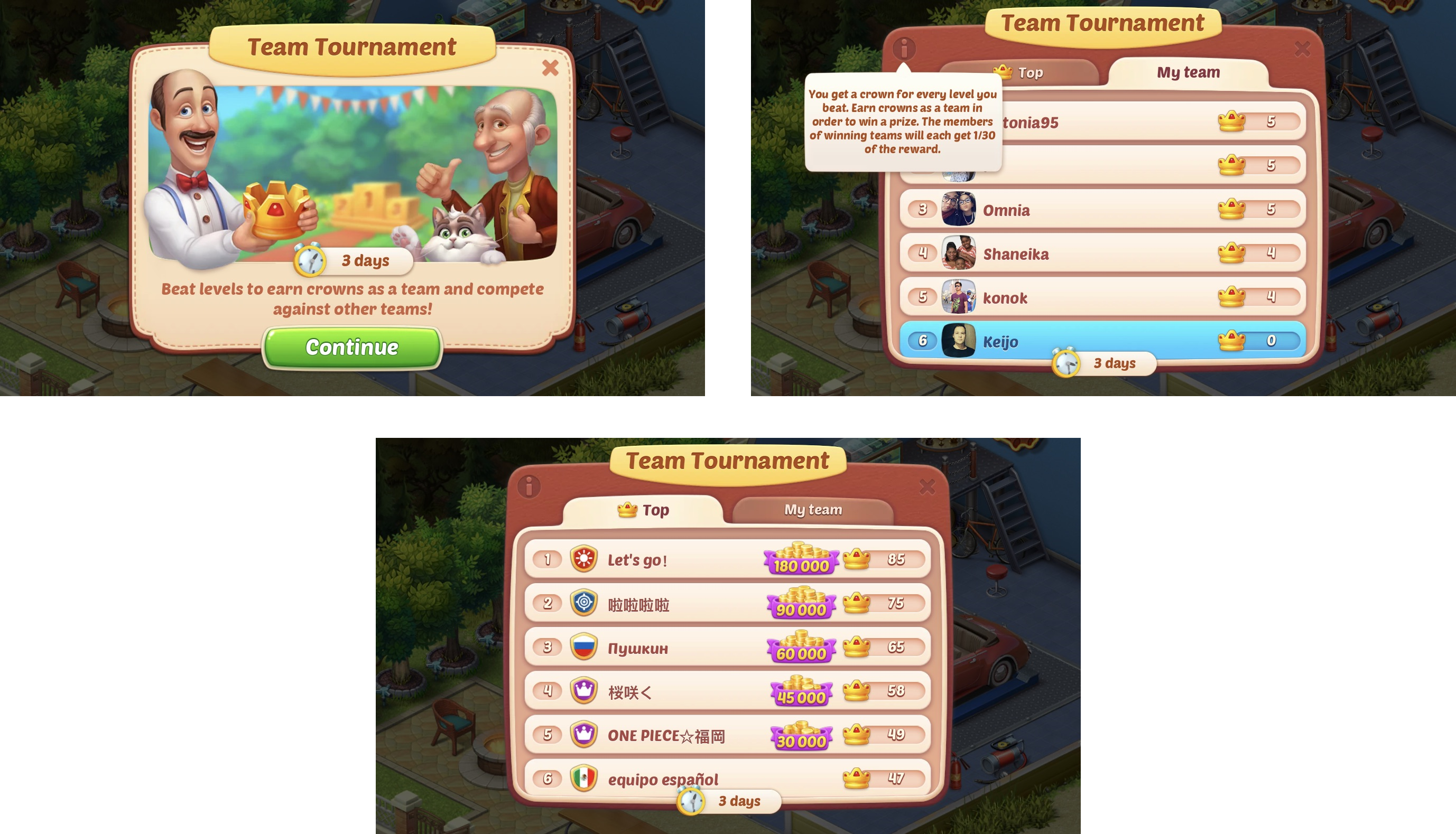 Team Tournament was also added to Homescapes quite soon after the introduction of guilds. The event is a simple co-op competition on which guild collects the most crowns. Guilds earn crowns in a similar way to the Team Chest event. Top guilds get rewarded with soft currency, which is distributed between guild members. 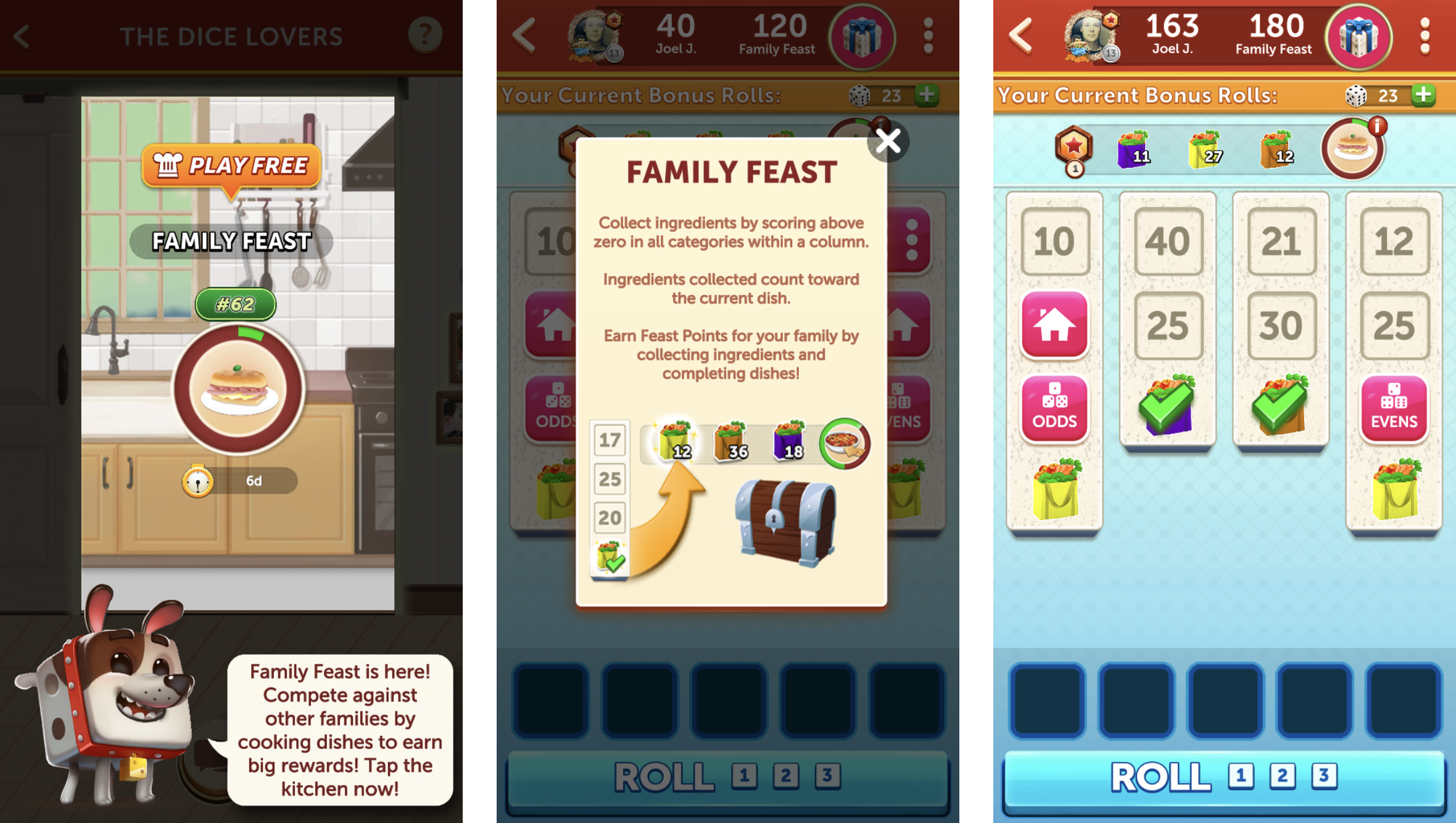 Yahtzee with Buddies Dice implemented a Family Feast event, a co-op guild competition where guilds compete on collecting “Ingredients.” Guild members earn these ingredients from event-specific levels, and they are added to the guild’s communal score. All participating guilds gain rewards, but top guilds also ascend to a new league tier (family level) in the competition ladder. 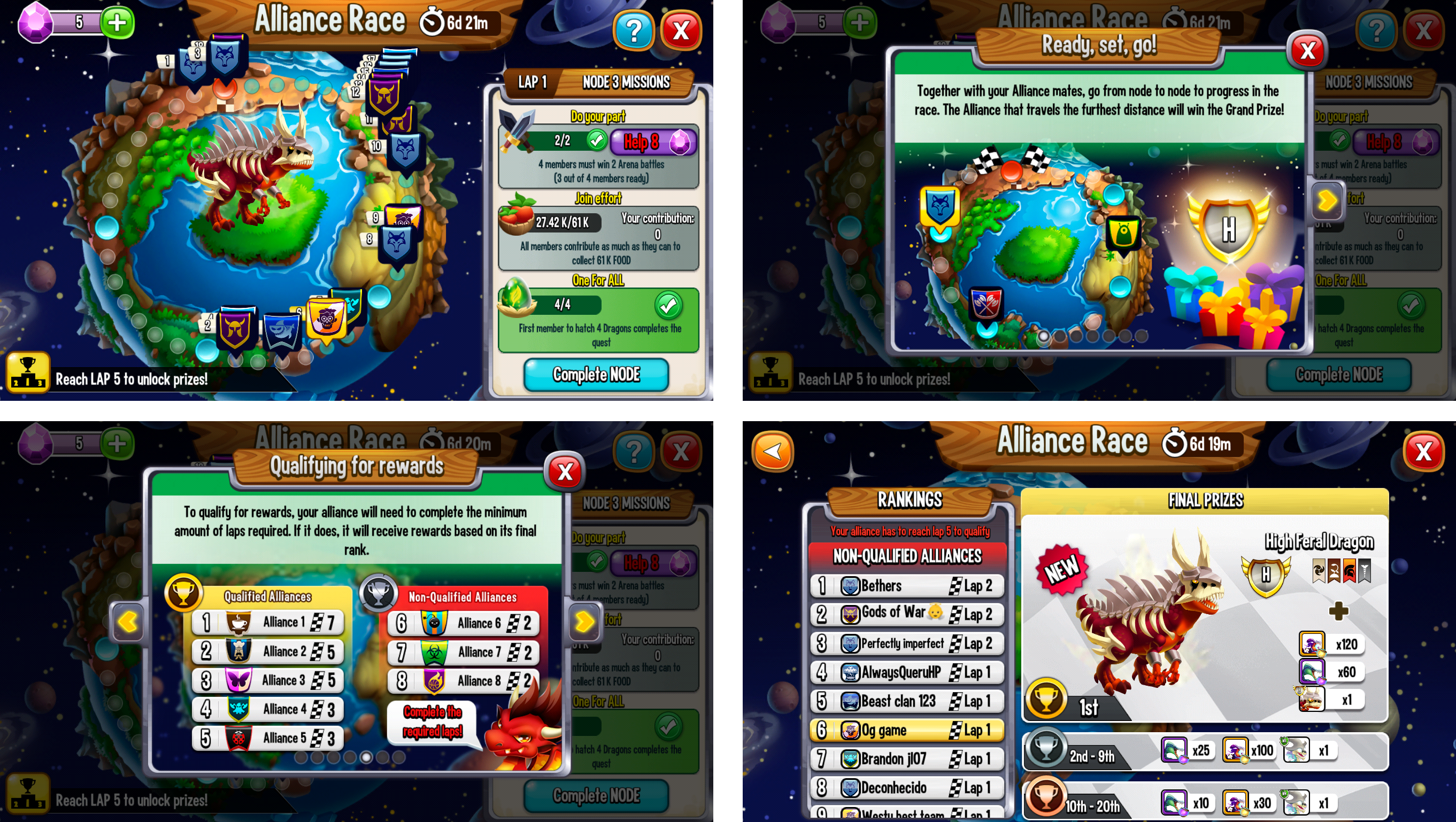 Dragon City Mobile is another good example of a game that added a co-op guild competition event, Alliance Race. In Alliance Race, as you can probably guess, guilds “race” against each other by completing a mixture of different personal and co-op tasks. Top guilds receive special event tied dragons as rewards. Later they also added an interesting implementation of a guild specific trading system, where guild members can trade orbs of different dragons.

Via this step-by-step roll-out of guild mechanics, casual games have not just increased their feeling of community and social features. They have built a solid foundation for any future social mechanics, features, and events they might come up with. Moreover, by using this approach, games can improve player engagement and loyalty without overwhelming casual players with very complicated mechanics from the get-go.

When we look at the big picture, it’s clear that social elements are trending across mobile games. And there’s no sign that this upward trend is subsiding any time soon. Guild mechanics are showing up in more and more casual games, and this is just one sign that players today are not just “lone wolves” but enjoy playing with others and building communities.

Find more feature implementations and insights in our service. Sign up for free here.

Gidon Jablonka, Head of Marketing at SOOMLA
East vs. West

What You Need To Know About RPGs In China