As we all know, RPGs are big in China, but few may realize exactly how big. One statistic is enough to shed light on the full volume of RPG games in China: in the top grossing 500 of the Chinese iOS store, 56% of all games are RPGs. This is partly explained by the effective monetization mechanics of RPGs, but if not for their popularity this wouldn’t be possible.

RPGs in the US vs. China

The majority of RPGs in China fall under turn-based RPGs 44% (including “pure” TBRPGs, auto-battle RPGs, “palace games” etc.), MMORPGs 37% and action RPGs 16%. The remaining 3% are “other RPGs” such as puzzle RPGs, fighting games and survival games. Fighting and survival games may not be the first thing that come to mind when you think of RPGs, but in the GameRefinery genre taxonomy (learn more about it here), they are regarded as such if they, for example, include significant character development mechanics. 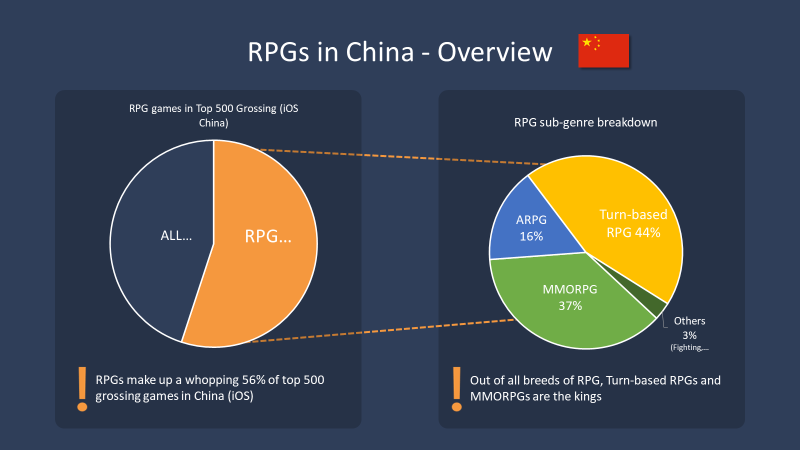 Meanwhile in the US, RPGs take up only a measly 19% of the iOS top grossing 500. Sub-genre-wise there are also some differences between US and Chinese RPG markets: MMORPGs are less than half as big in the US compared to China where they make up 16% of top RPGs, and “other RPGs” (fighting, survival, puzzle RPGs) make up a shocking 22% of the US RPG pie – more than seven times the share of that in China. 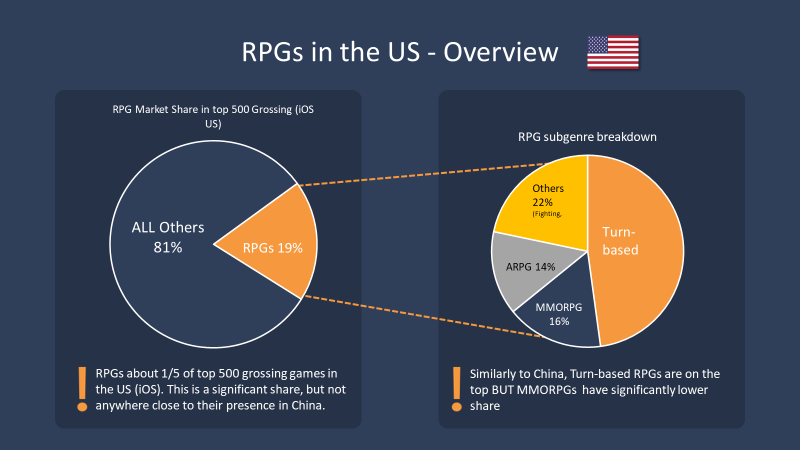 Diving deeper into the RPGs themselves, one can’t help but notice that Chinese RPGs have developed some unique and innovative features. First of all, although present in many Western RPGs, “triggerable auto-play mode” seems to be an almost a must-have in Chinese RPGs, with 82% of Top 100 RPGs including it. Other features that are common in Chinese RPGs, but rare in Western ones, include “exclusive relationships with players”, “paid progression plan”, “online time rewards” etc., some of which will be introduced more thoroughly below. 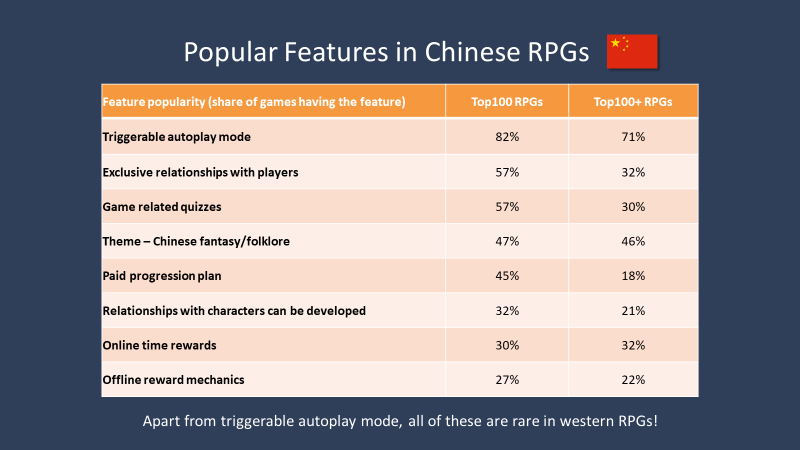 “Exclusive relationships between players”, a staple feature of Chinese MMORPGs, usually means that it is possible to “marry” other players through built-in mechanics or in-game systems. In some games, “exclusive relationships” may also mean a master-apprentice system or a best-friends relationship etc. The main point is that these relationships bring about tangible benefits to the player, such as XP boosts, special game modes, special items and so on. In the case of marriage systems, reaching these goals may require extensive gameplay and socializing with other players. That is because you usually have to first find someone who is willing to be your friend, then cultivate your relationship level with that player by gift-giving (often purchased items), and purchase special material items (such as wedding rings) before you can attend your virtual wedding.

Still keeping with the romantic theme, but somewhat different is the feature “relationships with characters”. In this case, instead of other players, players can flirt with, date or even marry NPCs. This is a classic feature of Japanese RPGs, but it has become very common in Chinese character-collector and anime-style “2D” RPGs. Usually, this is implemented in the form of developing your relationship or intimacy level with pretty girl characters (sometimes also boys), with stat buffs and/or pictures, videos, and voice clips of the characters as rewards. 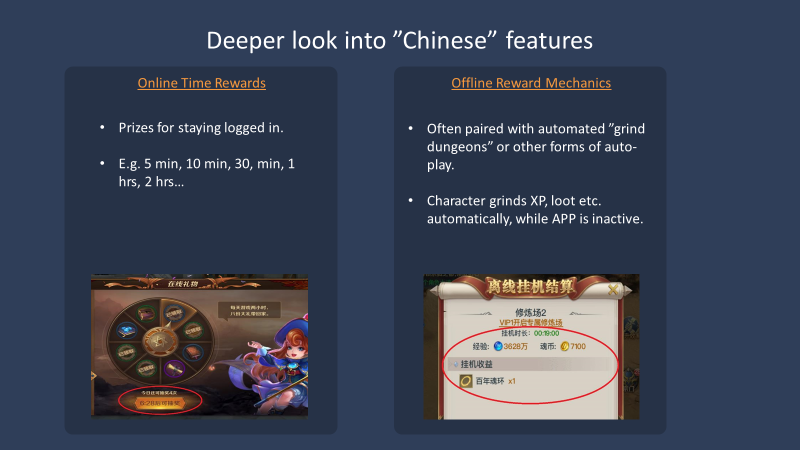 On a completely different side of the feature spectrum are “online time rewards” and “offline reward mechanics”. Both are related to playing time, but from a different angle. “Online time rewards” mean prizes that the player gets for staying online – the longer the session length, the better the prizes usually are. Meanwhile, “offline reward mechanics” seems to be doing the opposite – rewarding players for their offline time. This may seem counter-intuitive, but there is a logic to it because there is usually a limit to how much a player can hoard items, XP, gold etc. in one go while offline. Therefore, creating an incentive for (multiple) sessions each day. So instead of session length, this feature is aiming at session frequency. This mechanic tends to be made very clear to players with some form of report every time they log in to the game. It is also different from common resource harvesting in the sense that in offline reward mechanics the rewards are given for actual automated core gameplay. Players usually need to trigger the offline grind in some way, for example by placing the player character in a “grind dungeon”. This way, offline time rewards guarantee an easy grind for the player because every time they log on, they will have loads of XP, gold and/or items to speed up their gameplay. 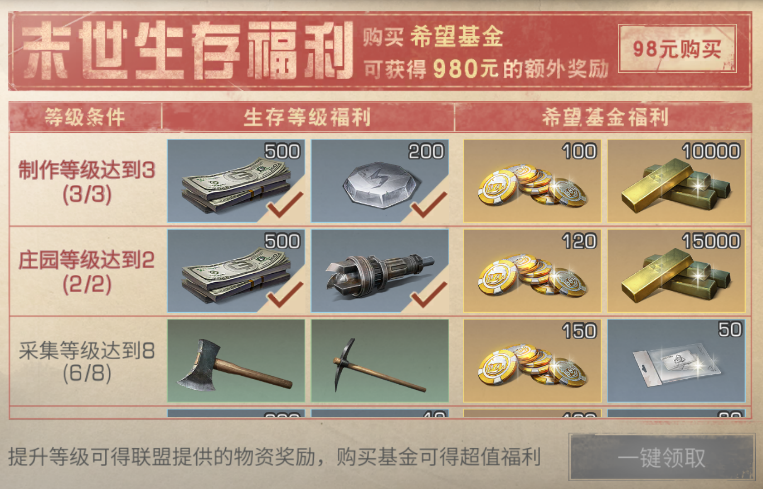 Example of a Paid Progression Plan from the survival MMO LifeAfter (明日之后) by NetEase.

So what does a successful Chinese MMOARPG look like feature-wise? Tencent’s Perfect World (完美世界), which has been hovering at the top of the China iOS top grossing list since its release in March of this year, includes many of the previously mentioned special Chinese features. It’s a typical example in many ways: an easy grind with triggerable auto-play, offline and online rewards; realistic art style with a Chinese fantasy theme, strong storytelling and game-related quizzes; strong social features with exclusive relationships and many different (sync. & async.) PVP modes.

Langrisser (梦幻模拟战) by Zilong Games, in turn, is a good example of a successful “2D”-style Turn-based RPG in China. Typical for the Chinese market, there is a lot of triggerable automation in the form of auto-play, auto-looting and triggerable speed of core gameplay, as well as strong social features with sync and async PVP modes, instant rewards for interacting with players etc. As a “2D”-style RPG, Langrisser gives the “relationships with characters” feature a major role by including many relationship development types with collectible characters and many types of rewards for such development. In addition to the already wide pool of characters, the game also regularly introduces new characters from outside the games the lore through collaboration events with other manga/anime style IPs.

One of the few foreign RPGs to make it to the Chinese iOS top grossing 200 is Age of Magic, a turn-based RPG by the Russian studio Playkot. Although it looks very different from the usual Chinese RPG with its Western style fantasy visuals, it has many features that make it easily digestible for the Chinese market. These include for example high levels of triggerable automation in the core layer, very story-driven gameplay and a strong emphasis on the character development meta, along with a healthy dose of live events with exclusive rewards. 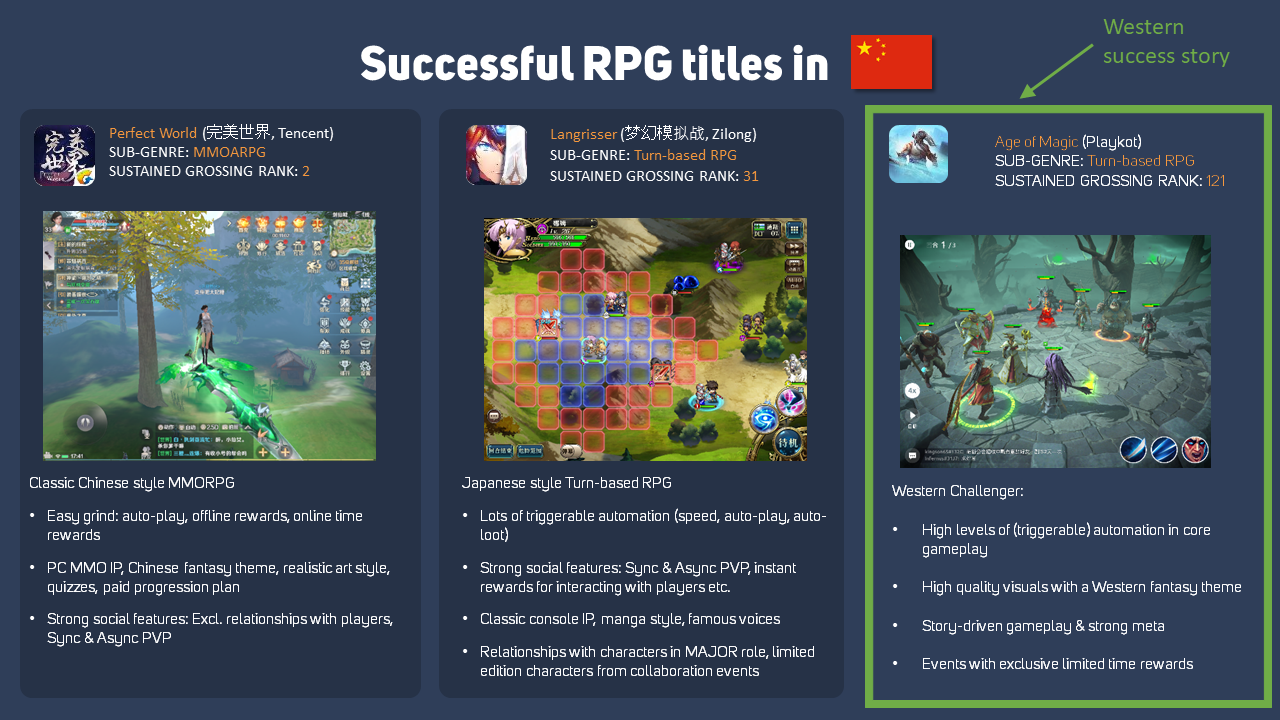 To wrap things up

In conclusion, when you consider releasing your RPG on the Chinese market, the first thing to remember is making the core layer of your game straightforward and easy for the player, with a strong emphasis on the meta. The importance of automation cannot be overly stressed. Chinese RPG gamers also expect lots of storytelling, beautiful visuals and lots of cutscenes. As tools for increasing user engagement with the game’s lore and content, you can add quizzes, player relationships, as well as online and offline rewards. The work you put into your game can bring about huge pay-offs in the end because Chinese RPG gamers are used to huge amounts of monetization sinks. You can even use many overlapping monetization mechanics, such as paid progression plans, rentable items, subscription plans, progressive IAP achievements and so forth.

Casual Games are “Guilding Up”