PvP is often the key feature that defines midcore games. For example, in shooters, RPGs, and strategy games, one of the most addictive elements is built around the possibility to show off who has the best aim, most cunning strategies, and strongest characters. But when you think about casual games, PvP is probably not the first feature that comes to mind. Considering this traditional view, could PvP be effectively implemented into lighter games such as casual Match3s, adventure, and customization games?

In this blog post, we’ll take a closer look at PvP-mode examples in casual games of various types to shed more light on how you can use PvP-modes as an extremely efficient tool in casual games to boost your user engagement and retention.

To start things off, let’s take a look at the casual game market and pick out games that utilize either an asynchronous or synchronous PvP-mode (or modes).

For those of you who are not 100% familiar with the terminology:

One easy way to find casual games with PVP is to use GameRefinery’s Market Explorer tool, which dissects the market based on your genre and feature interests. As a result, we found a handful of successful US top 200 grossing Casual Games with either asynchronous or synchronous PvP. 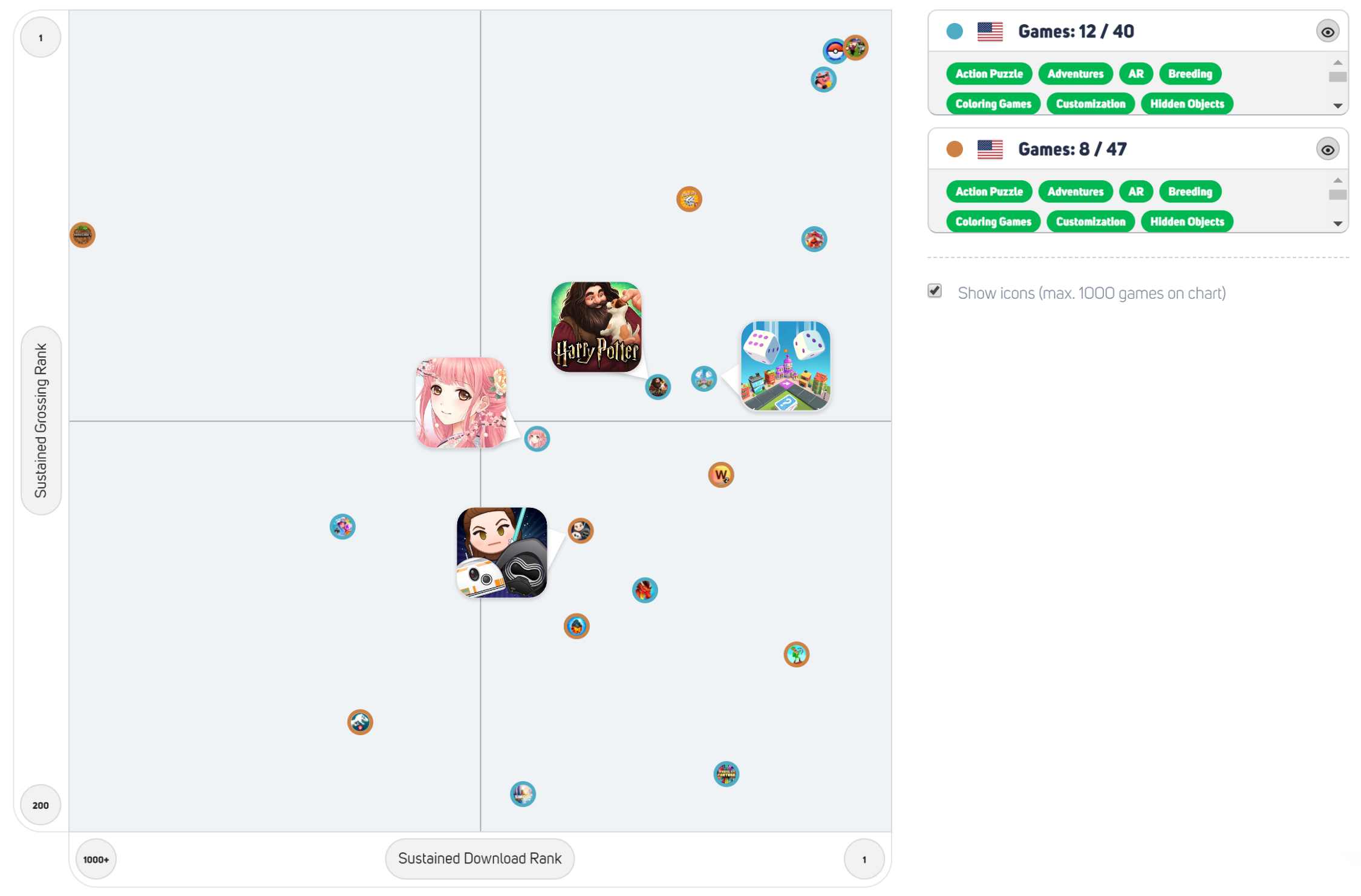 Let’s take a closer look at how four of these casual games in the US top grossing 200 have implemented their PvP modes. And to give you a broader view on the matter, we’ve picked casual games from several different subgenres.

Fast-paced Match3 game Disney Emoji Blitz is all about matching emojis to score as many points as possible during a limited time. The game’s meta revolves around collecting and leveling Disney themed emoji characters, each with their unique skills. Recurring events play a significant role in this game, as the game is continuously cycling between various events with different mechanics and special event character rewards.

Food Fight Face-Off is one of these recurring events and quite interestingly packs a nice touch of synchronous PvP mechanics. 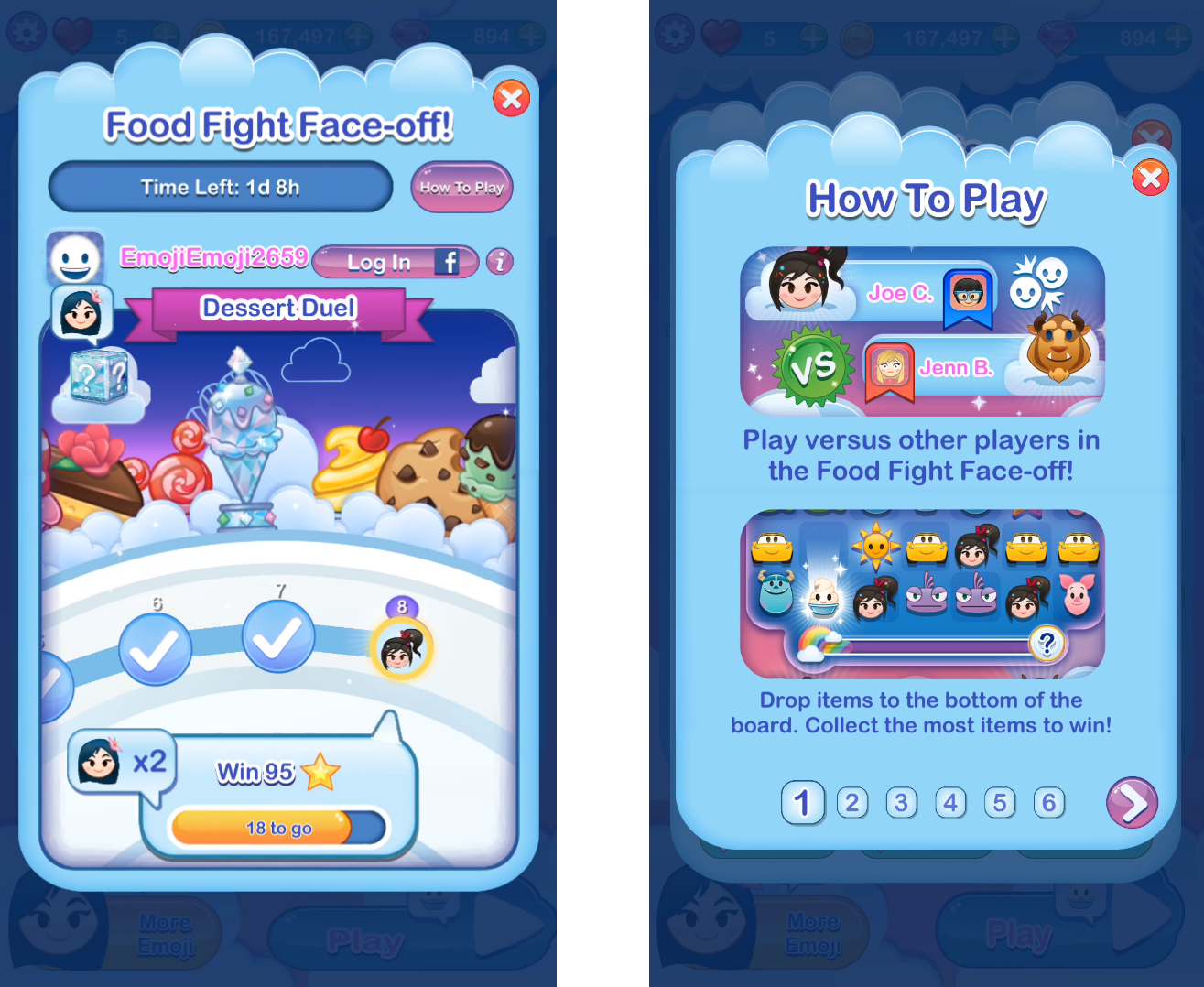 In the Food Fight Face-Off event, players fight each other in brief, minute-long, PvP matches where the goal is to collect more items than your opponent. You receive items by dropping them down to the bottom of the board. There are also items on the board that let you “attack” the opponent, for example, by covering the screen with visual obstructions. Playing these matches rewards players with stars, which in turn give players rewards as they progress through the event’s reward track.

All in all, Food Fight Face-Off is an excellent way for players to challenge their friends and find out who’s the ultimate blitzer. As matches are synchronous in nature, beating your friends in real-time is even more satisfying! 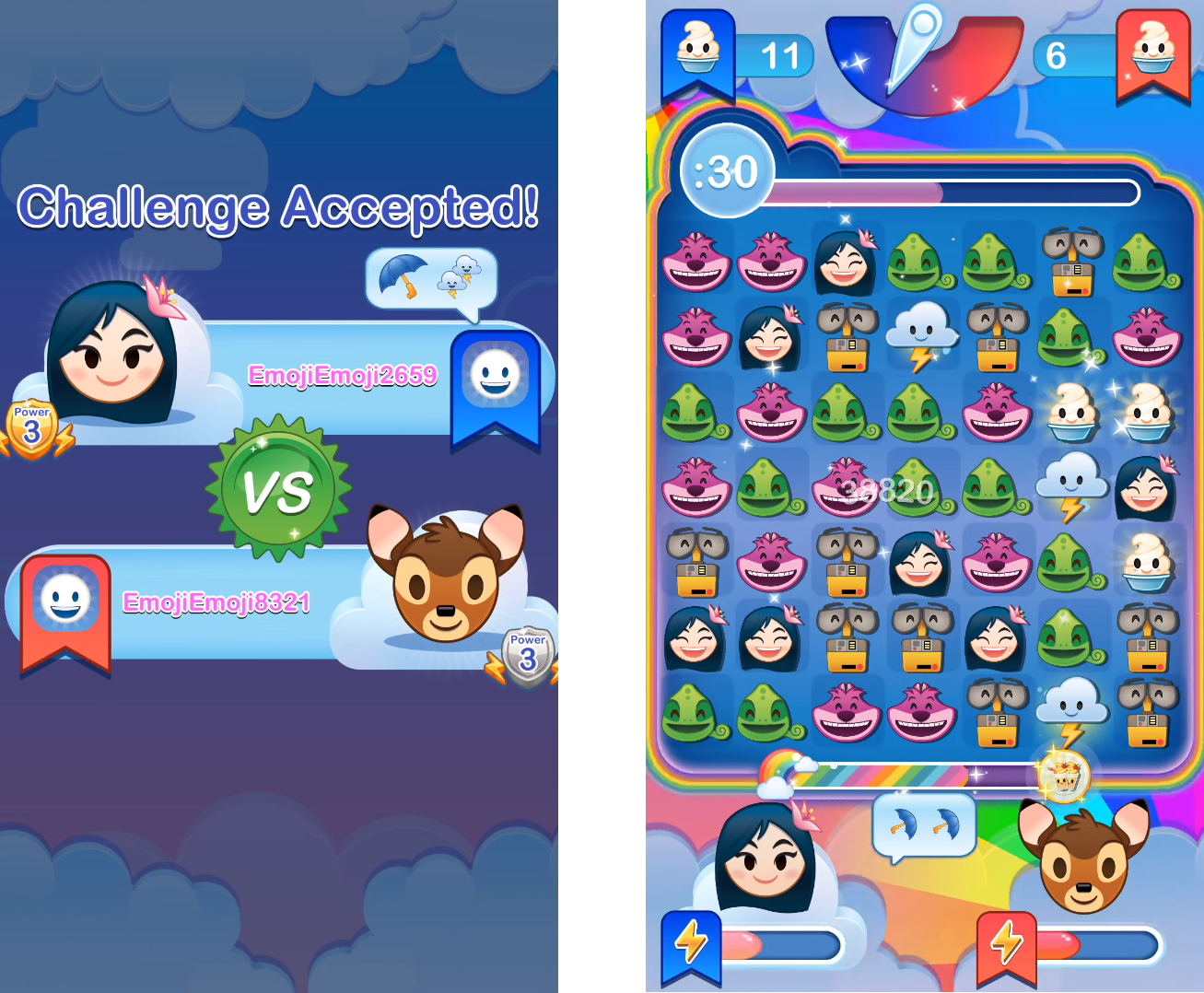 Board Kings is a truly unique take on the board game genre. The base idea is very simple: you throw dice to move on the board and collect coins, and coins are then used to construct buildings on your board. What makes the game interesting is its PvP aspect, which turns this peaceful-looking game into a full-on stealing and invading experience.

Here’s how it works in practice. By landing on a “Train tile,” you are taken to another player’s board and get to take one lap around the board. If you then manage to land on special tiles like the “Occupy tile” or “Steal tile,” you get temporary ownership of that player’s building or get to steal their coins. Players can protect their boards by setting up “Cops” on tiles. These helpful little fellas prevent a visiting player from making further rolls unless they use some premium currency or return to their home board. To sum up, Board Kings encourages rivalry and fun casual competitive play with this asynchronous PvP aspect.

Harry Potter: Hogwarts Mystery is a pretty traditional adventure game where you complete straightforward tasks to progress in the game’s story. While adventuring, you develop your character (light RPG elements) and occasionally fight turn-based battles against AI opponents.

Even though the game is rather casual and has a heavy emphasis on a single-player story, there is also an asynchronous PvP mode called “Duelling Club,” which uses the same simplified turn-based battle mechanics familiar from the single-player mode. 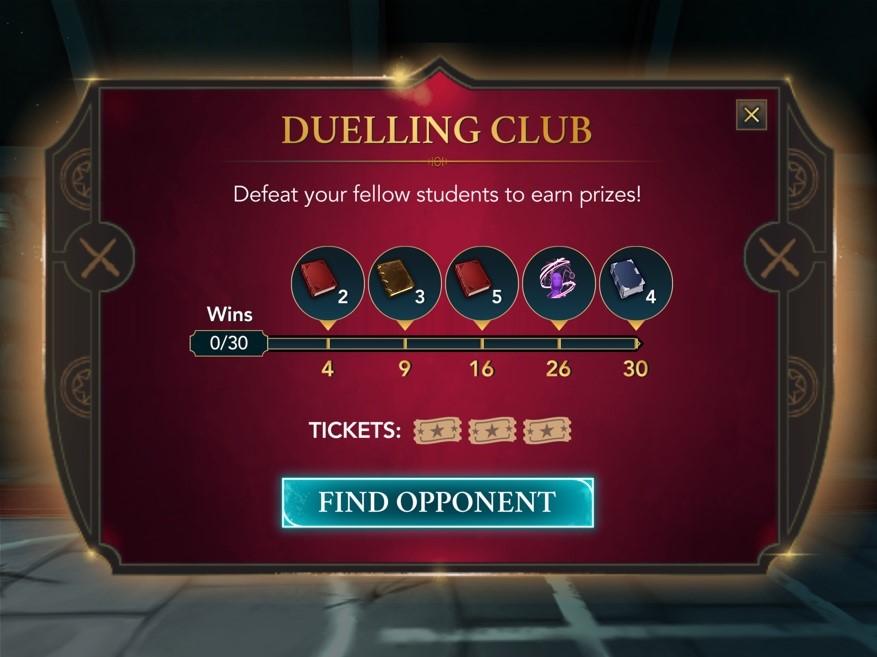 The battle mechanics are super straightforward: you choose from 3 different styles of attacks (basically rock-paper-scissors) – if you have the stronger attack, you get to use a spell against the opponent. The match will go on until either of the dueler’s health reaches zero. 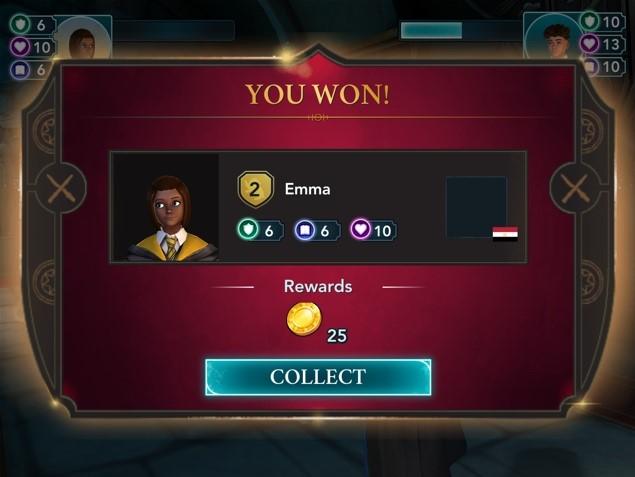 Love Nikki has a heavy emphasis on visual customization of the player’s character, but it also offers many mid-core RPG-like elements to beef up the game’s complexity. The game’s main idea, in a nutshell, is to win beauty contests and pass levels similarly to any traditional turn-based RPG. But instead of physical battles, the “combat” in Love Nikki takes the form of a fashion contest, in which players choose their outfit and “fight” against the opponent by posing.

As an addition to the single-player mode, there’s an asynchronous PvP mode called “Stylist’s Arena.” These arena matches are just like single-player beauty contests, but the characters use their skills automatically. To increase the sense of competition, winners climb up the ladder in the Stylist’s Arena league.

To spice up the PvP aspects even further, Love Nikki runs co-op PvP events that allow you to team up with your buddies to triumph over other players in 2v2 fashion shows. The great thing about the co-op is that it emphasizes the feeling of playing together as a team and further pumps up the satisfaction you get from winning.

As these well-performing casual games illustrate, it’s definitely possible to successfully implement PvP-modes to “lighter” games, such as Match3s, customization, and adventure games. However, it’s essential to keep the PvP elements also casual and simplified to avoid alienating your game’s core audience. If you look at the example titles discussed here, all of them have made sure that the PvP matches are speedy to get into and quick to complete, not requiring too much concentration and investment from players.

More implementation examples of not just PvP modes but also many other features such as guilds, limited-time events, and even upgrading types of characters and items can be found in GameRefinery’s Implementation Examples tool. Check it out here. 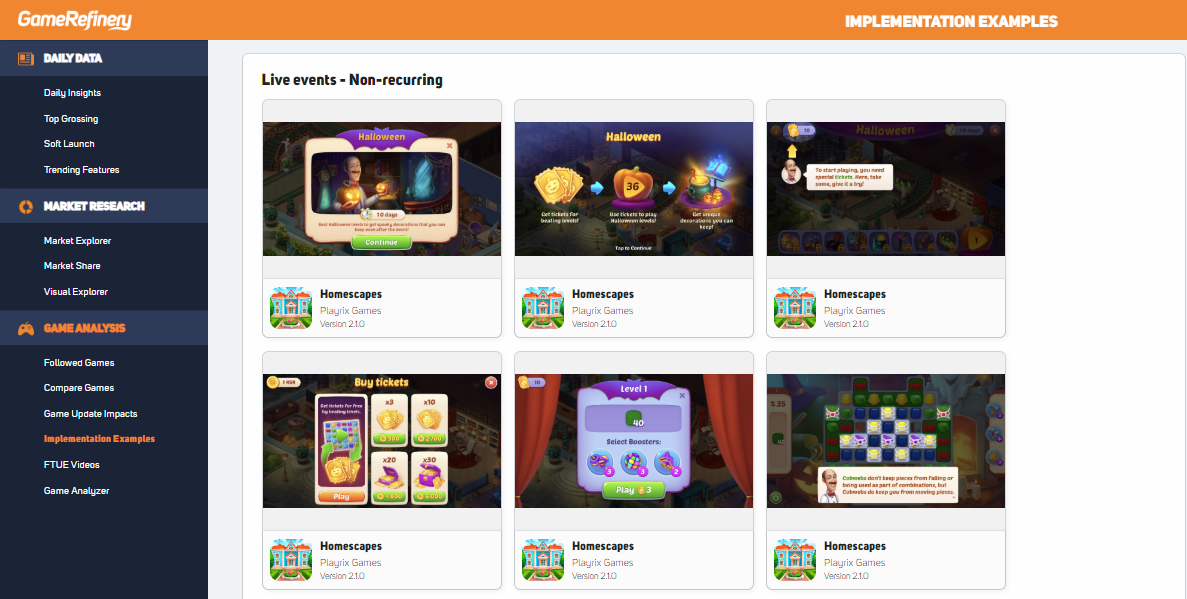 Keeping Your Head: A Beginner’s Guide To Header Bidding In Mobile Games