Since the early days of free to play mobile gaming, monetization has been the talk of the town. Resistance, reluctance, and rage were common among mobile gamers as designers were trying to figure out this revolutionary business model and its mechanics. Today things have fortunately changed quite a bit, but getting monetization right still isn’t easy – far from it! In this post, we’re going to take a look at some of the recent macro trends in casual game IAP monetization. We hope that this short read will give you insights and inspiration to take your monetization to the next level.

What Are Casual Games?

Defining mobile game types and genres is not a simple task, and we’ve written our fair share about the subject in the past. In this post, we’re going to define casual games according to our genre taxonomy which focuses on the feature-set and the key game audience.

Casual games come in all shapes and sizes so to speak, but they all share certain key characteristics. So whether it’s a Match3 puzzler, a Word game, or an Endless runner it’ll be

1. Straightforward and easy-to-learn
2. Enjoyable in short sessions
3. Primarily focused on core game (instead of meta)

The third point actually takes us to the subject of casual game IAP monetization. As the core game is the key focus, the monetization of casual games has traditionally revolved around squeezing the buck out of core gameplay. This is, if we simplify things a bit, the primary difference between monetizing casual and midcore games:

As listed above, the three main building blocks for monetizing your casual game’s core are Boosters, “Continues” and Energy/lives (depending on the game type). They all have slightly different uses and goals, but all three appear in the vast majority of casual games nevertheless.

Home Design Makeover, Gardenscapes and SIMS Mobile all use “Continues”, Boosters and Energy/lives to monetize their players

As stated, this is the traditional view of Casual Game IAP monetization. However, things are changing.

Meta on the rise

During the past few years, the mobile game market has matured and casual gamers, in particular, have become familiar with gaming as a concept. As a consequence, they are looking for new ways to be awed and engaged. Five years ago it was enough to crush candies in repetitive levels with simple mechanics, but now you have to give your players so much more to maintain that same level of engagement.

This is why meta game has been recently making its way to casual games. As a result, we’ve started to see a lot of collectible mechanics, light character, item and building development aspects in games and genres traditionally viewed as “core only”. 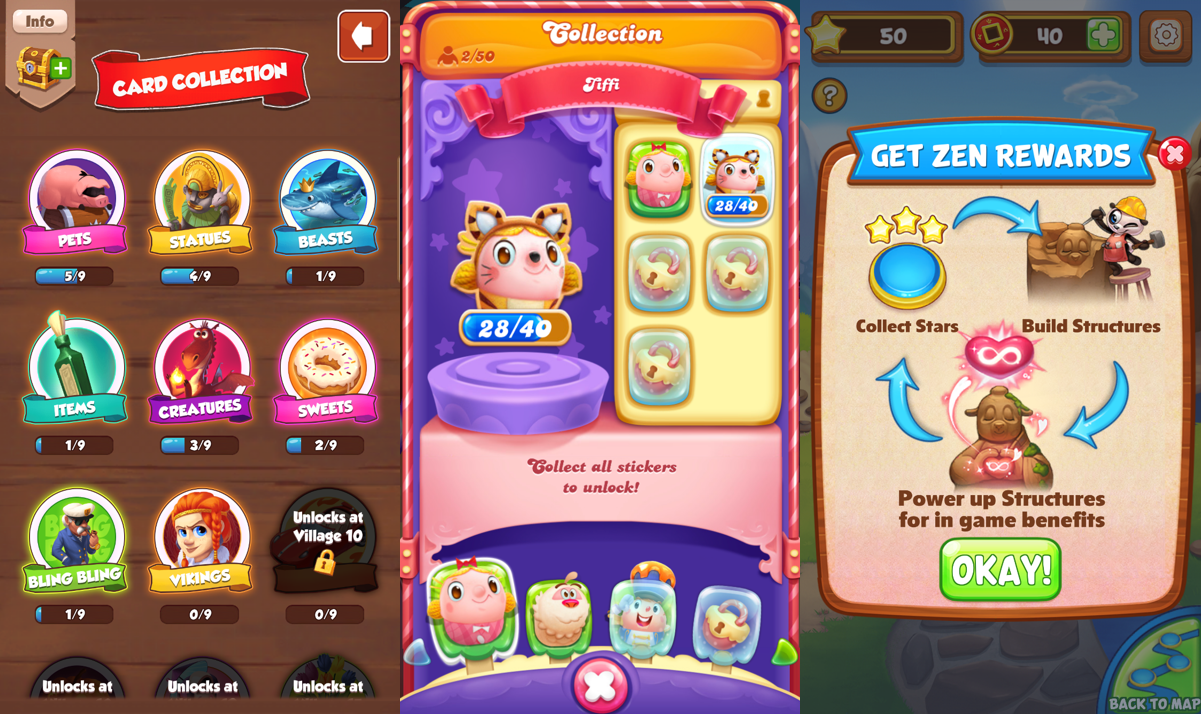 Out of the various meta possibilities, the collection meta and related mechanics is the current megatrend. Match3, Slots, Dice, Hidden object, Word games – well, practically all casual games are implementing collection albums at a growing pace. The amount of collection mechanics used in mobile games has grown over 70% overall, and even more in some subgenres.

The reason for this “collection boom” is simple – it works:

One of the greatest things about adding meta monetization elements to your game is that it doesn’t have to affect the core game at all. For instance, it’s possible to introduce almost any kind of collectible system to your slots game without breaking its core game balance! This is something you might want to consider when working with your next casual game concept or creating a road map for feature updates post-launch.

Sticking to the core – avoiding pitfalls

Even with meta monetization raising its head among casual games, the primary focus of monetization is still the core game. And as discussed earlier, you can pretty much find all core game monetization tricks from one of these three baskets:

Each of these elements has its own strengths and challenges. For example, Boosters are great in allowing players to get through hard levels and freebies can be used to get players hooked/dependant on their powers. On the other hand, some players might feel that relying on boosters is “cheating” and are reluctant to purchase or use them all together. Others might hoard boosters to use them in “really tough spots”, which then may never come, as there’s always a “tougher spot” on the horizon.

Continues have similar strengths and challenges as boosters, but monetizing through energy and lives is a different game indeed because it often clashes with other monetization mechanics (both core and meta related). This is because energy and lives are all about restricting players’ session length and the time they actually play the game. In other words, a conflict arises when you monetize by restricting playtimes (i.e. use of energy & lives) but at the same time try to monetize the playing itself (i.e. use of boosters / continues).

The balancing challenge laid out above is closely related to a recent big trend we’ve witnessed in the casual game market. More and more top titles are loosening lives/energy monetization in order to boost the efficiency of their other sinks (e.g. boosters, continues, collectibles). Here’s how they do it:

So in a nutshell, players get to play more and as a consequence are more likely to spend money to progress (and save their progress). It’s no surprise that top casual games regularly rotate various events and offer special playing modes so that players have more meaningful and diverse content to engage with.

The mobile game market is and has always been fluid and extremely quick to change. If you’re not able to adapt and follow trends at least to some degree, you’re seriously hurting your chances of success. On the upside, there are almost infinite possibilities within the framework of those trends, which gives designers the freedom to test, innovate and inspire.

Here are the key takeaways worth noting about recent trends in casual game IAP monetization:

Interested in doing market research of your own? Sign up for the free layer of our service here.

All You Need to Know About DGaming