A month ago we released the third and last part of our blog series, which concentrated on introducing and establishing a new, more comprehensive, and insightful method of categorizing the hundreds of thousands of games in the AppStore. As some of you might remember, the main idea behind the method we introduced was to take a step away from the traditional, static game genres and instead, focus on the very fundamental mechanics of games and what they “teach” to players (you can find the first part of the series here).

As new games keep on pouring to the AppStore by thousands each month, the importance of being able to effectively categorize this mass is crucial for developers and publishers, as a great deal of market-, competitors- and trend analysis depends on it.  Due to this growing importance of finding a method of differentiating games more accurately, we will now introduce a new addition to the set of tools, which will ease your pains when trying to make some sense out of the overcrowded shelves of AppStore. We call it the Layer Approach.

It’s the Core That Counts

The Layer Approach is based on the acknowledgment of all games being constructed out of different main sections, each of which has its own goal or task for the player to fulfill. We call them ”core layers”, as they essentially form the core mechanics or “core loop” of the game. For example, in any given cookie-cutter strategy game, there are usually two main core layers:

In the first layer of that example, the goal for the player is to get as strong as possible through preparation, so you would have better chances of success in the second layer – defeating your enemies.

Even with the hundreds of thousands of mobile games out there, you might be surprised how almost every game’s core mechanics can ultimately be depicted by one or two of these core layers.  And believe it or not, all the core layers of all the mobile games can then be divided into two different main types of layers:

So what kind of preparation and action layers there are in the current mobile games and more importantly, how you can use the Layer Approach to your benefit when analyzing the market or creating your next masterpiece of a mobile game?

When the rise of mobile games began and we started to adopt them into our cell phones, the mechanics of the games (and the monetization) were usually very simple. Although the top-grossing charts in the western markets still have their fair share of casual, single-dimensional games, the amount of more complex, multi-dimensional games is on the rise. This brings us to the increasing importance of the preparation layer, which is a characteristic feature of multidimensional games.

As discussed earlier, the preparation layer of a game describes, what players are doing to prepare themselves to be more successful in the action layer. Here’s a short list of example preparation layers we have identified when crunching the current iOS US market with our analytic tools:

This list, naturally, cannot capture all the nooks and crannies of individual AppStore titles, but it nevertheless gives a very good high-level depiction of various types of preparation layers out there. The important thing is to concentrate on the primary focus of the game’s preparatory part.

The action layer captures the core nature of the action in the game, i.e. what the player is actually doing to advance along the game’s progression curve, with the capabilities acquired in the preparation layer. In the chart below, we have listed example action layers from the current US iOS market: 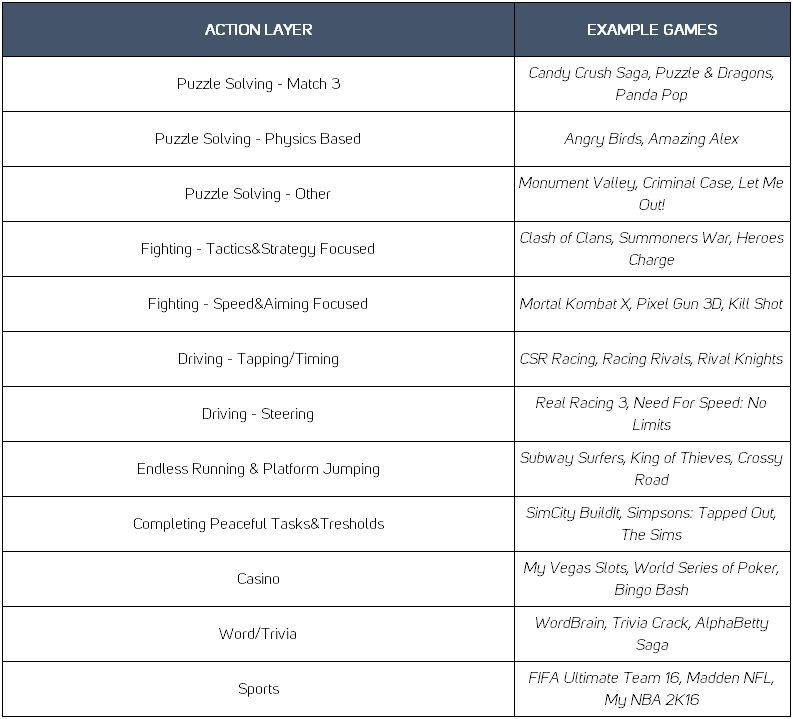 As you might notice, these action layers share similarities with traditional genres but provide a more comprehensive view of the actual mechanics of the games. For example, different kinds of driving and puzzle games have their own distinctive action layers to reflect their different characteristics.

The Benefits of The Layer Approach

Together with these preparation layers and the actions layers described earlier, you are able to see beneath the superficial game genres, and more importantly, you are able to meaningfully differentiate games inside a given AppStore genre. For example, Heroes Charge and Taichi Panda fall under the RPG genre but have VERY different core mechanics, i.e preparation, and action layers. If you fail to take into account these fundamental differences inside the traditional game genres, your view of the extremely diverse mobile game market is seriously hindered.

For the consumer, the Layer Approach is, of course, more or less a nice-to-know kind of thing, as the traditional genres work well enough for them to find the games of their liking. But for all you professionals out there, it’s often crucial to get more insightful and accurate market data for market research, competitor analysis, and other purposes.  The Layer Approach, therefore, helps you not only to get a more insightful view of the AppStore’s inhabitants but also to prevent the possible wrong conclusions caused by the use of too simple and static categorizations.  Especially when used together with our other categorization methods discussed earlier, the Layer Approach provides some serious new edge to your analytics toolkit.

This was the introduction to one of the methods we at GameRefinery use to categorize mobile games in the AppStore. Hopefully, you found this post useful and even picked up some new ideas along the way. If you would like to know about our methodology and analytic tools on a more detailed level, you can contact me via email: joel(at)gamerefinery.com

The Effect of Licensed IP on Mobile Game Success Measured!