In this blog post, we are going to drill-down to a very hot topic: the effect of licensed IP on the commercial success of mobile games. Not only discussing the effect and building a hypothesis, we have used proven quantitative methods to actually measure and quantify the effect.

The competition in the mobile game market is fierce and it is not getting any easier. Every day thousands of new mobile games are published and most of them will never get noticed by the bigger public. This is identical to what we have seen in other, more mature industries: when the competition increases, the importance of brand also increases. For example, in 2014 the value of the top 10 most valuable global brands, that face fierce competition in their own industries, increased their brand value even further by 8% – a well-known and valued brand (if it is licensed or “self-made”) is a sign for consumers that it is worth spending their precious time and money on it.

In mobile game industry, we have seen more and more games that are based on well-known licensed brand and have been very successful. Simpsons: Tapped-out, Kim Kardashian: Hollywood, Fallout: Shelter, Walking Dead: Road to Survival and Marvel Contest of Champions are probably the most well-known examples.

How the effect of the brand is measured

Even if games based on licensed brands are clearly over-represented in the top grossing list, it however, doesn’t tell if the brand itself has been the driver for success. All of the games are, after all, well-designed free2play games published by well-known developers or publishers.

To be able to extract the effect of brand IP on the commercial success of mobile games, we have used statistical modeling methods to find how strongly licensed brand IP explain the position at the iOS US top grossing and at the same time controlling over 150 other features from the game. This is very important because we don’t want to mix-up the effect of brand IP with some other features in the game that increases the potential. It is essentially the same approach that is used to measure for example, the impact of price on product demand (and separating the effect from weather effects), how eating healthier food affects the expected remaining lifetime (and separating the effect from gender effect). If you are interested to learn more about the methodology, you can contact us and we are happy to tell more

In the analysis, we have used google trend data to be the measure of how popular the brand actually is. This information about the popularity of a licensed brand IP in our model as being one of the “features” the game has, we can measure if it has any effect on its own. Our strong hypothesis is that it has a quantifiable effect and the success of, for example, Kim Kardashian: Hollywood is strongly driven by its licensed IP. Below is a graph as an example of google trend data for keywords “Kim Kardashian” and “Simpsons”. As the google trend data is indexed based on the searches you make (index 100 being maximum for the key words you have used) we have used Simpsons in this analysis as a base value and comparing other brands to it. For example, if Kim Kardashian’s google trend index is now 16 and Simpson’s 5, then our Brand Popularity index for Kim Kardashian is 3.2. Below you can see brand popularity indexes calculated for a couple of well-known brands. Note that at this point these indexes only tell how popular these brands are, not yet how this popularity is turned into effect on commercial potential. 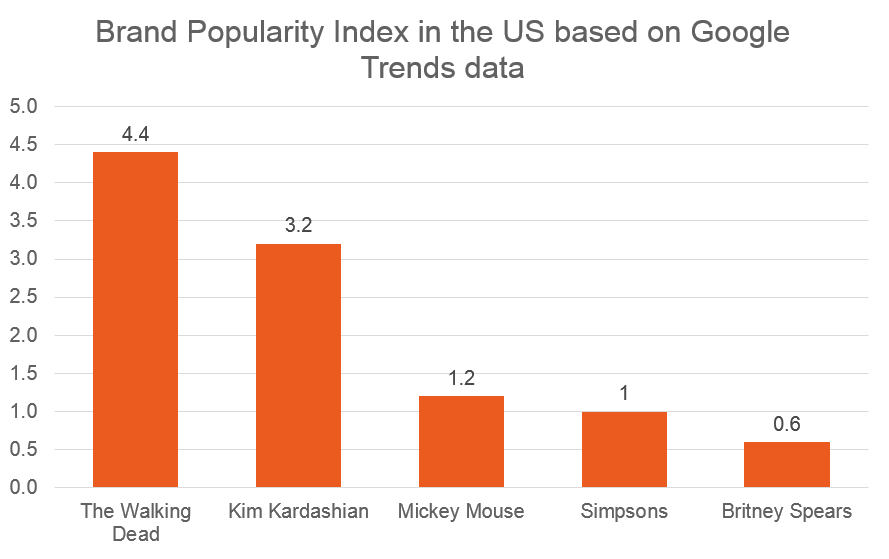 The diagram below summarizes the idea of our approach:

In average, the licensed IP increases the chances of getting to the top grossing 50 list, but there are big differences between games. Part of that is explained by our finding that there is a strong increase in the effect after the threshold of Brand index being 1. If you have Brand index below 1 the effect is only 3.1%, but above 1 the effect is increased to 10.9%. Below is a graph about average effects of a brand in case of different brand popularity index levels. The numbers here are isolated effects of different features on the probability of a game reaching top grossing ranking 50 or below at the US iOS top grossing list. So, for example 10.9% means that having that feature in a game, and keeping all other factors equal, the game has in average 10.9% higher probability of reaching top grossing ranking 50 or below that not having that feature. (For the statistically oriented readers: the results are statistically significant with 95% confidence level. If you wan’t to know more about the methodology, you can contact me via email vp(at)gamerefinery.com.)

As we now have isolated the effect of brand IP of game’s top grossing ranking we can estimate the effect of licensed brand IP and run what-if-simulations with different kind of brand scenarios. For that, we have used publicly available data of estimated daily revenues (in this analysis we have used data from www.thinkgaming.com). We can turn the probability of reaching certain top grossing ranking (not only the top 50, but also top 10, top 20, top 50 etc.) to daily revenues.  Note that these are of course just estimates because the publicly available data is not always reflecting the truth. Despite this, we think the results are quite interesting when we tested a couple of what-if scenarios.

Glu, developer of Kim Kardashian: Hollywood has announced a partnership deal with Britney Spears for a new mobile game that lets a player “interact with Britney and experience the glitz and glamor of the entertainment business.” What we wanted to test is the following:  what if Glu would have made a deal with Britney (or other currently less known female celebrity) for their first “celebrity-based game” instead on having Kim, but otherwise had the same feature set. The result: the revenue would have been 50-60% lower. At first,  this seems to be a huge drop. On the other hand, if you think about how skewed the revenue distribution in the higher end of the top grossing chart is, it is not as surprising (game in within top 10 rank can have multiple times higher daily revenue than a game within rank 20-30). Without as strong licensed IP as Kim Kardashian, the game wouldn’t have been be able to achieve (or the chances at least would have been clearly lower) top grossing position 10-20 as it now has. To summarize:

Scenario 2: The Walking dead vs. a general zombie game

The Walking Dead has been one of the most popular TV-series recently. The Walking Dead: Road to Survival was recently published by Scopely and it is based on The Walking Dead comic series. It is a strategy game where you can build your own base, form a team of survivors and fight against hordes of walkers and other survivors. The game also has a strong emphasis on story elements that are tightly integrated to the Walking Dead’s world and events (the comic book version though). After the launch, the game quickly reached a ranking within the top 20 grossing games and since then, remained between rankings 20 and 70 so it is clearly a successful game. The scenario we wanted to test: how successful the game would have been if we had stripped out The Walking Dead brand including the strong story elements that are tightly integrated to the licensed brand IP itself. The result: the revenue would have been 65-75% smaller. Without the brand effect, the game would have had a difficult time to reach top 100 grossing list and even more difficult to keep that position.

In both of the analyzed scenarios, a strong licensed IP helped games that would have been successful to turn them into really successful games that have had a huge impact on the revenue of both these companies. Naturally, we don’t know the price of these IP’s, but they have probably been very high ROI’s.. However, it is still good to remember that a well-known licensed brand IP itself is not enough alone – you also need to get the other features in the game right, implement well and have sufficient UA budget.

There are two major trends favoring the usage of strong licensed IP’s:

Hopefully you found our findings interesting – we are going to monitor the effect of licensed brand IP’s also in the future so stay tuned. And if you have a case where we could help you to make better brand decisions – don’t hesitate to contact us!