In the first part of this blog series, we discussed the problems stemming from the traditional (and quite inflexible) way of categorizing mobile games in today’s rapidly developing markets. As a solution to these problems, we introduced a more comprehensive way of sorting out the hundreds of thousands of inhabitants crowding the AppStore at the moment. This was done by locating your game along two spectrums based on the fundamental mechanics of your game and what it “teaches” to players. These spectrums are:

When we combine these two spectrums, we get a complete depiction of the mobile game universe. About six months ago, this universe looked like this:

By locating your own game in this heat map, you will get a better understanding of not only your title’s competitive environment but also of your target audience and their preferences. But as the US mobile game markets develop so rapidly, this heat-map has also changed quite a bit during the last six months: 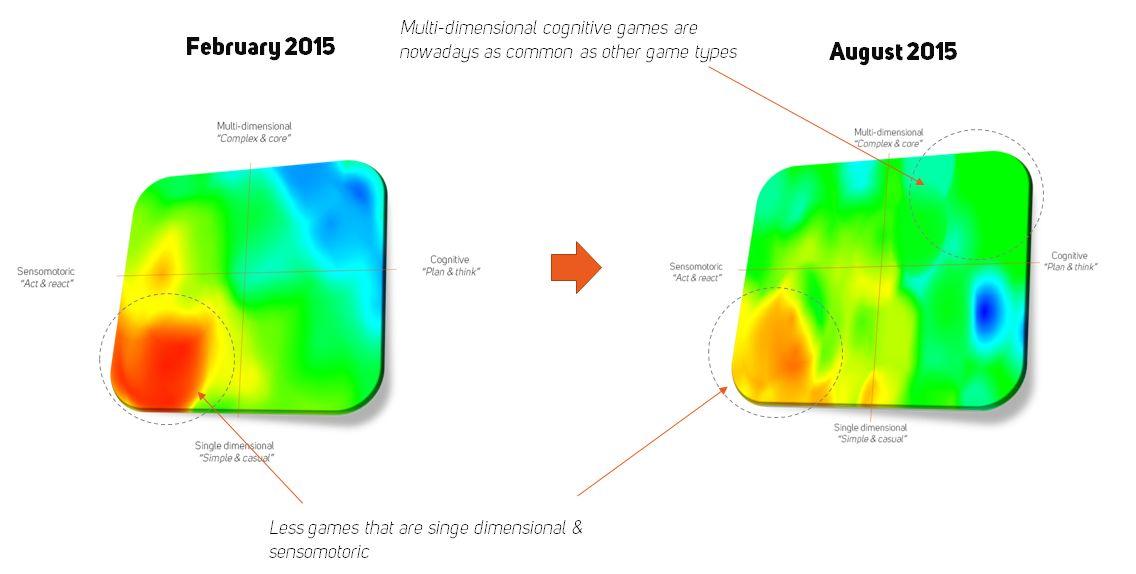 In the second part of this series, we concentrated on the sensomotoric side of the heat-map, and discussed features, that according to market data, work especially well in enhancing the commercial potential of those speed and reaction focused sensomotoric games. This last part of the series is all about the right-hand side of the heat-map presented above – the cognitive games.

First, we will take a brief look at the general state of these games in the US iOS markets today. After that, we’ll present you with some detailed data on what features you might want to consider implementing to your next cognitive-based game if you want to increase your chances of success in today’s US iOS top grossing charts. And as always, we don’t try to swoon you over with our subjective opinions or views on these matters – we’d like to think that objective market data is a much more effective persuader in these matters.

Where the sensomotoric games’ main focus lies on aiming, reacting to changing situations, and/or steering and maneuvering, their cognitive counterparts are all about strategic and tactical thinking, logical puzzle solving, and slower-paced action. This means that the vast majority of puzzle and strategy games (and many RPGs as well) can be labeled as cognitive.

Despite this, single-dimensional cognitive games are doing extremely well commercially. Just take a look at the US top grossing list, and you can see that there are plenty of casual puzzle games sitting high up in that chart. And if you look at the multidimensional cognitive games, you can actually say the same thing (nothing lasts forever – except Clash of Clans and Game of War as kings of the US top-grossing hill).

This brings us to the topic, which we actually touched already last time: even though there are plenty of successful sensomotoric mobile games, it is their cognitive siblings that have had the momentum on their side for quite a while now. This doesn’t by any means indicate that you should only be making cognitive games, but this shift of power in the US markets during the last years cannot be denied.

3 WAYS TO INCREASE YOUR COGNITIVE GAME’S CHANCES OF SUCCESS

So the demand for cognitive games is clearly out there, and you happen to have one of those cooking.  But in order to create the cognitive-dish that today’s mobile gamers drool over, you have to have the right recipe. In other words, the market data indicates that there are certain features, that are much more common in the hit games than in the Average-Joes.

Of course a single feature hardly ever makes or breaks a game, as games are constructed of dozens of features AND their reciprocal synergies. But nevertheless, it always helps to have the right ingredients in your stew of a game. So next we’ll take a look at a couple of features that according to recent data from the US markets, are heavily trending up and will help your cognitive game in the harsh competitive environment. As we have already handled the match 3 genre in pretty detailed level (here, here, and here), we’ll be now focusing solely on the other breeds of cognitives.

One interesting characteristic of mobile games is that the gaming sessions and the way of people are actually playing them differ quite a bit from the console and PC/Mac world. Therefore, it might come as a surprise to at least some of you, that automated combat and other autoplay features are really helpful in boosting cognitive mobile games’ commercial potential in the US. Originating from the Asian markets, this feature has had a successful migration overseas and can nowadays be seen in many of the most successful RPG and strategy games.

There are of course several ways of implementing this feature, but the most common ones seem to be:
1. Raiding, where you usually just click a button and the level  (which is earlier completed once by you) is looted automatically for your pleasure
2. Autoplay, where your characters do the fighting themselves and you just watch them triumph or fall
3. Calculation-based, where you don’t ever see the actual combat, but the results are calculated behind the curtain and delivered to you in the form of a battle log.

The core mechanics of your title determines the optimal way of implementing this feature, but whichever you end up with, it will be helpful in boosting your game’s chances of success in the US top grossing lists.

Multi-dimensional cognitive games (i.e. RPGs, strategy games, etc.) are born with great supporting capabilities for complex features and multifaceted progression elements. Therefore they are, by nature, well-aligned for having lots of content in both vertical and horizontal sense.  Vertical content grows by adding more of the same things that are already in the game (e.g. levels, characters, buildings), so it’s the “easier” way of increasing the game’s scope, as you don’t have to implement whole new features. However, the amount of horizontal content is something that, at the moment, differentiates the most successful multidimensional cognitive games from the rest.

One effective way to increase your title’s horizontal content and its commercial potential is the implementation of so-called permanent passive boosts. They are essential things, which reward the player (or his-/her characters) with bonuses from the moment they are acquired. For example, a technology tree with various technologies to research is a good example of this feature. Players use in-game currencies and (hopefully) real money to fund the research, and once the research is completed, they are rewarded with some passive bonuses or newly unlocked content to play with.

The great thing with permanent boosts is, that they are “superficial”, i.e. they can be slapped on almost any cognitive game, without having to blow up the game’s core and change its fundaments. Of course, there are balance issues to consider, but it’s a rather small thing compared to other, more core-focused ways of adding horizontal content. Moreover, passive permanents boosts are helpful in pacing the players’ progression in the game and giving them one new major element to develop and optimize.

3. Borrowing other players’ characters (in PvE)

If we examine features at a higher level (i.e. “feature categories”), social elements, in general, have had the strongest performance, when it comes to trends in the US mobile game markets. But this is mainly due to the more complex social features, such as various guild mechanics and other co-operational aspects, as well as diverse PvP-features.

Out of the most interesting and up-trending social elements, we ended up picking one co-operational social feature, which has proven itself as an exceptionally effective mechanic in increasing cognitive games’ commercial potential in the US – the possibility to borrow other players’ characters to help you in PvE modes.

This feature has gained importance during the past months, and its benefits derive from two characteristics. First, it increases interaction between players, as it gives them explicit reasons to actually have some kind of link with other gamers, but it doesn’t force them into a TOO deep interaction. Second, it enables players to see other players’ progression in the game, which has a positive effect on retention, as it lets you see different kind of achievable things (characters, skills, items, etc.) in the game and experience new tactics&playing styles with other players’ characters  This is especially true if the feature kicks in during the first steps a new player takes in a game.

As already pointed out above, there are several other interesting and powerful social features also trending up in the US, but we picked this one because it’s not only efficient in raising your title’s commercial potential, but its implementation (especially when limited to PvE) is rather “light” in comparison to some other, even more, complex social mechanics.

This ends our third and last part of this blog series. As always, thanks for taking the time to read our data-driven ramblings, we hope you have found them interesting and useful. Even though this topic has now been wrapped up, we have a lot of new and exciting content coming up in our blog, so stay tuned!

3 Things to Know About Session-Length Restriction

The Effect of Licensed IP on Mobile Game Success Measured!