Did you know that the majority of players in the world’s biggest game are female? Not everyone does, we are often filled with fixed, unalterable ideas of how things stand and the gaming industry is no exception to this rule. That’s why it is more than healthy, from time to time, to question our views to verify whether they still remain valid. And there is no better way to do that than with real, actionable data.

Editor’s Note: This is an extended version of an article on the same topic that we published in Pocketgamer.biz and BusinessofApps

This blog post is all about the gaming stereotypes we tend to have of the Japanese and Chinese markets. Is FPS still a turn-off for the Japanese? Is casual all but dead in China? What about Japanese gamers and their alleged “multiplayer phobia”?

Disclaimer: It should be noted that we are only looking at mobile (iOS, top grossing, number of games). 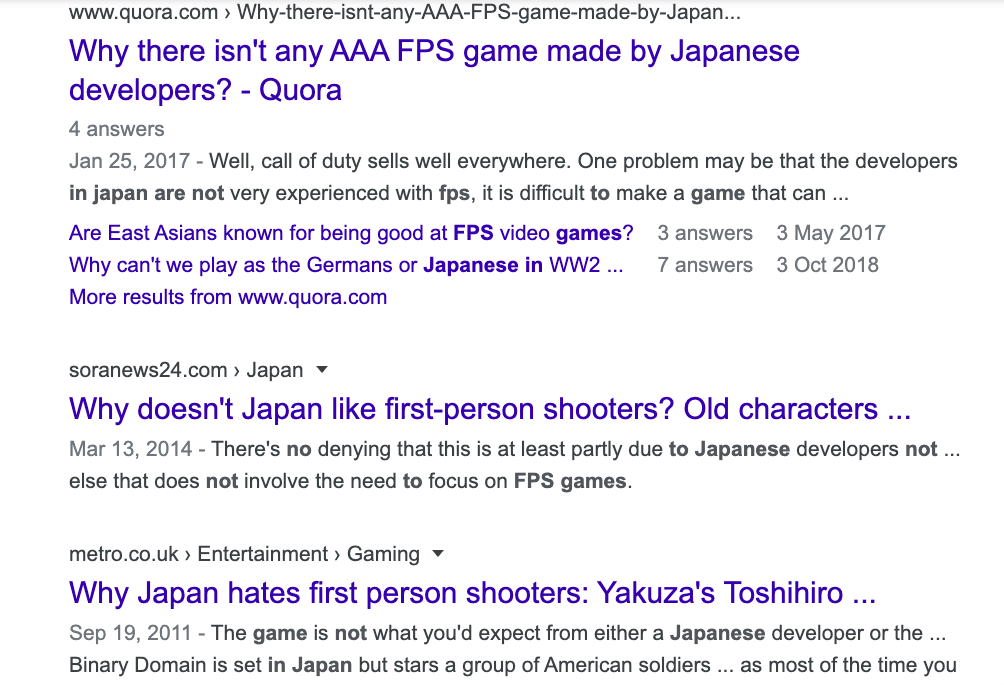 Background: This has to be one of the most long-lasting puzzles relating to the Japanese gaming culture. Why have many kinds of shooter, especially FPS games been largely marginalized in the land of the rising sun? Is it because the Japanese have a totally different attitude towards guns and popular FPS themes such as WW2, compared to let’s say Americans? Or does the market’s history of neglecting PC-gaming for a substantial period of time have something to do with this?

Based on this market comparison of shooter games in the US, Japan and China of the top 500 grossing mobile games, we have several interesting findings.

Verdict: more true than false. Japanese gamers are not discriminating shooters, but they aren’t keen on developing them locally either.

Stereotype #2: “China is the Land of MOBAs”

Background: Let’s start with the obvious: Honor of Kings (Arena of Valor in the West) is absolutely huge in China and one of the highest-grossing mobile games in the world. After all big in China = big globally! For that reason, it’s tempting to think that MOBAs (multiplayer online battle arenas) would be all over the Chinese market.

What the GameRefinery data says: 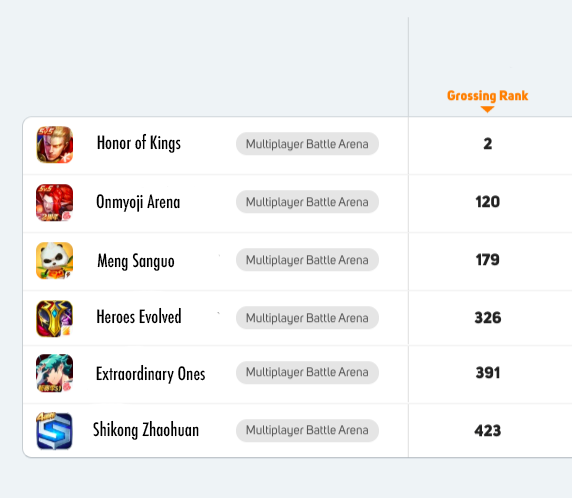 All the top 500 Grossing MOBAs in China listed.

It is very likely that we are looking at a winner-takes-it-all scenario here, where even major publishers with big local IPs (such as NetEase’s Onmyoji Arena) haven’t been able to match Tencent’s success with Honor of Kings.

Background: battle pass is something we’ve covered in numerous blog posts already, so no need to go into a lot of detail here. However, with the season pass fever running high, it’s easy to forget the battle pass mania isn’t as much of a universal phenomenon as one might think.

While the battle pass has seen a surge in China and the US, the same cannot be said about Japan, where non-Japanese titles mostly fuel the (comparatively speaking) modest growth in BP utilization. It remains to be seen when, if ever, Japan-made-games will start experimenting with the mechanic as well.

Verdict: False. Japanese top-grossing games have not jumped on the battle pass bandwagon (yet).

Stereotype #4: “There is no room for casual games in China!”

Background: China is known for its gaming culture that favors deep mid- and hard-core game types that can be experienced through genres such as (MMO)RPGs and 4X strategy games. For many Western developers more focused on the casual space, this raises questions on market demand for “lighter” experiences.

From this, we can make a couple of interesting observations:

Verdict: More true than false. There is no denying that getting to the top 500 grossing with a casual game is more difficult than in the US. However, this is not to say it’s impossible as some of the most successful foreign games in the market are Playrix’s Scapes match3 titles.

Background: Another common belief about Japanese gamers is their appeal for single-player and co-op experiences over player versus player multiplayer action. Should “multiplayer phobia” be blamed for this? 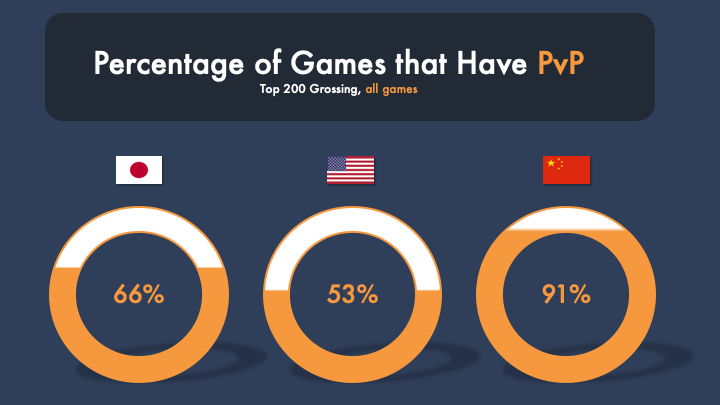 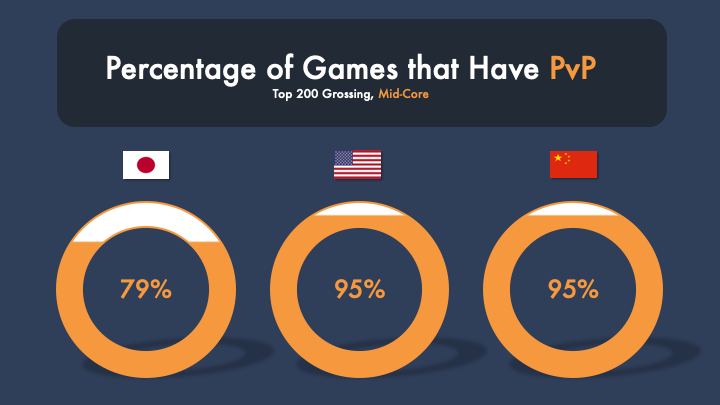 Verdict: More true than false. As much as one-fifth of Japanese top-grossing mid-core games have managed to find success without PvP. In the US and China, 95% of top mid-core games utilize PvP.

Stereotype #6: “Top Games are All Manga in Japan”

Background: One of the things that are often thought of as a distinguishing factor between Japan and the West is the market’s peculiar preference for the Manga art style.

What the GameRefinery data says: 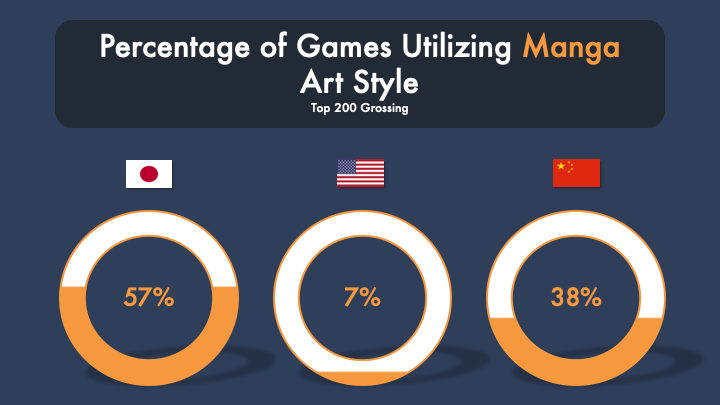 Unsurprisingly, Manga is widely utilized throughout the most successful mobile games in Japan and we can see a drastic difference in its popularity when compared to the US. On the other hand, as many as 43% of games have still managed to reach the top 200 with cartoon or realistic art styles.

Background: Console gaming has never really had a chance to take off in China due to the bans imposed by the local government. That’s why many popular console brands such as Mario don’t resonate with local gamers the same way they do in other markets. However, the opposite holds for PC IPs, as computers were the number one gaming platform before mobile. 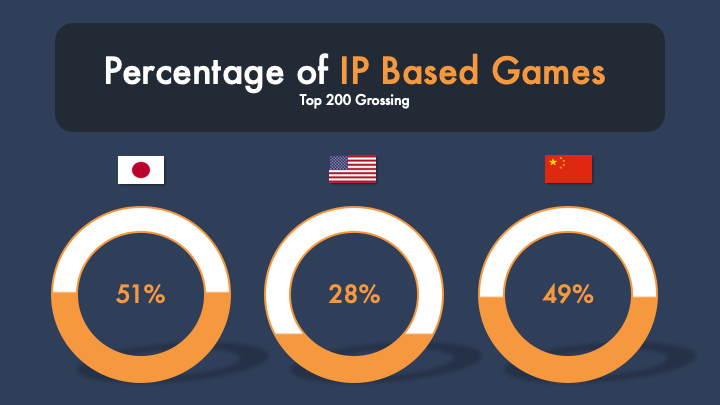 2. Next, we can drill down to see what percentage of games utilizing an IP are based explicitly on a PC IP.

Verdict: More true than false. In China, half of the top 200 grossing games are based on an IP, and among them, the usage of PC brands is very high, especially when compared to the US and Japan.

So to sum things up:

1. Top-grossing shooter games do exist in Japan, but their number is smaller than in the US or China. And where are all the successful made-in-Japan shooters?

2. Honor of Kings seems to be the one and only MOBA king in China

3. Battle Pass is all the rage in China and the USA. However, the Japanese market shows that it’s not utilized in all markets.

4. Casual games are overshadowed by Mid-Core in China, a clear difference to the US.

5. While having PvP in a Mid-Core game in the US or China is an absolute must, some of the Japanese mid-core top-grossers, such as Monster Strike, can thrive without it.

6. More than half of successful Japanese mobile games (57%) do utilize the manga art style.

7. PC IPs are more widely used among hit games in China than in other markets.

Are you interested in finding data on the mobile game market? Sign up for the free layer of our service here.