As we analyze thousands of games, every once in a while we come across rare yet innovative mobile game features.

At Gamerefinery, we analyze games from the AppStore by downloading them, playing them, and manually mapping each feature in the game into our database. We currently track over 200 features and how they correlate with success in various mobile game markets such as the US, Japan, and China. Alongside the numbers and data, we’ve created a collection of thousands of screenshots that cover these features and their implementations in various types of games.

Even though we already track a considerable number of features, we’re always on the lookout for more. But to keep things under control and the accuracy of our analyses high, we can’t add every new interesting feature to our list when we first encounter it (even if we wanted to). Usually, the reason for not adding a new feature to our system boils down to two points:

1. The feature is very difficult to define in detail that our analysts can objectively track it consistently and accurately

2. The feature is so rare that we’ve only seen it once or twice, meaning that it doesn’t yet have enough market impact

In this blog post, I’ll share some interesting features that fall in either of these two categories. The impact of these features on retention and revenue is open to speculation, but maybe this list can give you some inspiration as you consider what to work on. If you are looking for statistical data on what features increase your chance of success, I would recommend scheduling a demo for our service.

In Japanese mobile gaming there exists a concept called リセマラ, Reset Marathon. The idea is that when starting a new mobile game you reset your progress until you get an SS / 5* / Ultra Rare character(s) that will be able to carry you through the game for a long time. Usually, the game forces you to remove and redownload the game to do this, which is a tedious process that can quickly distance new players.

However, recently Japanese games have, in an increasing number, added the possibility to reroll your initial gacha pull unlimited times. This lets the player get their “waifu,” “husbando” or “OP unit” and gives them a great start that makes them more invested in the game. Above are examples from ファントムオブキル (known as Phantom of the Kill in the west) and TERA ORIGIN giving players the option to reroll.

An interesting variation of this feature was used in The Alchemist Code in Western markets around Halloween last year. The game had a paid gem only gacha banner that you could pull 5x 5* characters from, and you could reset it up to 10 times in search of that ultimate combination of characters.

With Pokemon Go came the location based games that encourage you to move. We have seen variations of that with themes from Harry Potter to Jurassic Park dinosaurs and Moomins to list a few.

But can walking be encouraged outside location-based games? Digimon ReArise attempts to do that. By linking the game to your Apple Health data, it can track your steps in this optional mode. This feature increases your partner Digimons affinity with you and the Digimon can also find items for you based on the number of steps you take. Your Digimon can also meet other Digimon and provide friend suggestions.

For Japanese audiences there are extensive wikis on pretty much all mobile games to help in finding out whether a character is worth investing in or not in the long run. But sometimes having that information at hand in the game could be helpful.

Kingdom of Hero, a turn-based RPG with plenty of characters has a system for that. In the game, you can write a short review of the character, and other players can put a thumbs up for the reviews they found most helpful. They can also report any inappropriate reviews.

Many games download data discreetly while the player is engaged in the tutorial, or the game is downloaded fully from the App Store. In some cases, the games are so small in size that with modern internet speeds, that there is hardly any download time. However, some games choose to give you something else to do while the game loads to your device. 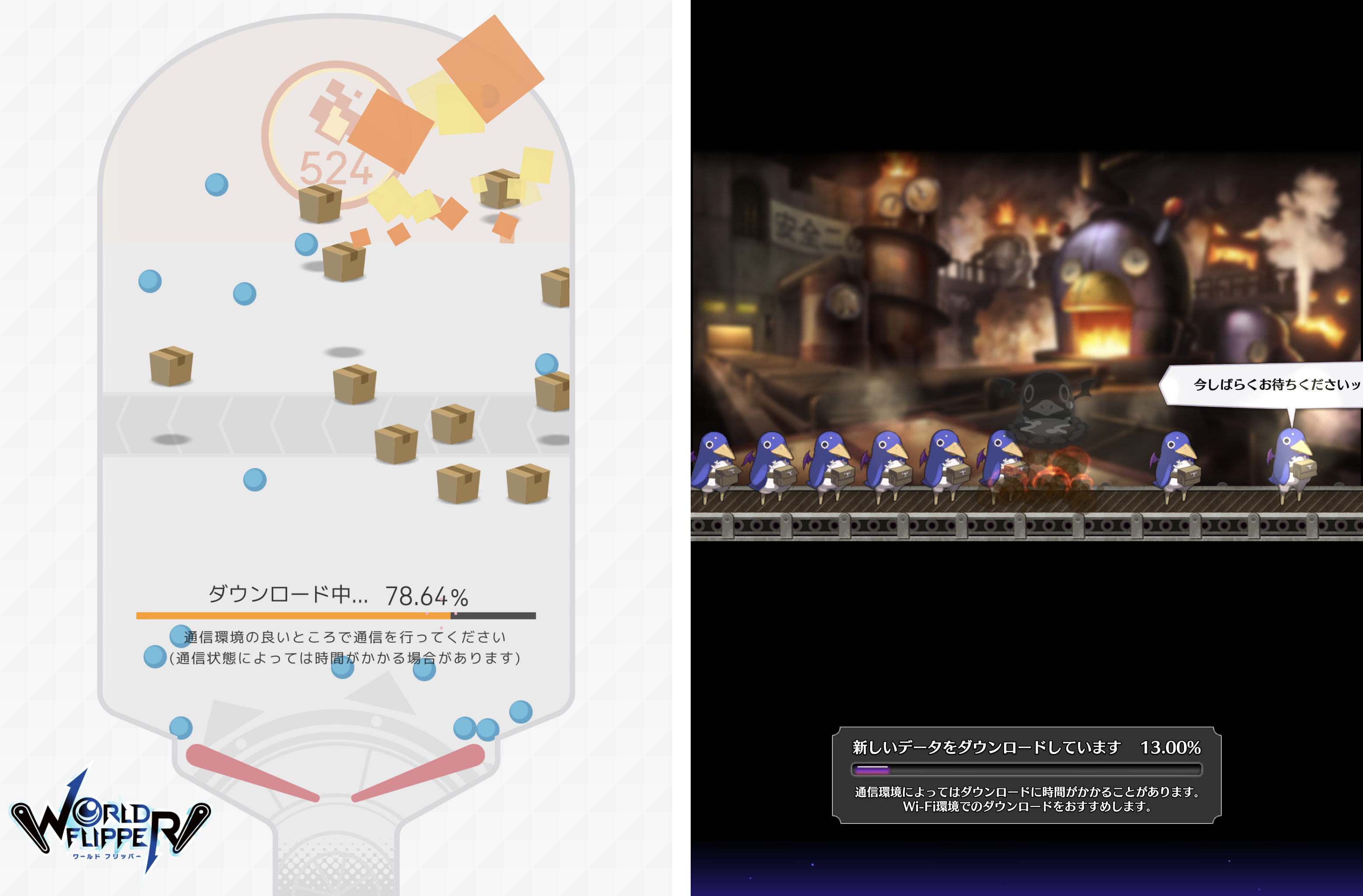 World Flipper has a conveyor belt full of boxes you can shoot your Flipper ball at. As you hit the boxes, new balls pop out, and eventually, you have a screen full of bouncy balls to entertain you. There is also a score for how many boxes you have destroyed. Disgaea RPG has a similar system where you can keep tapping penguins on a conveyor belt to make them pop. 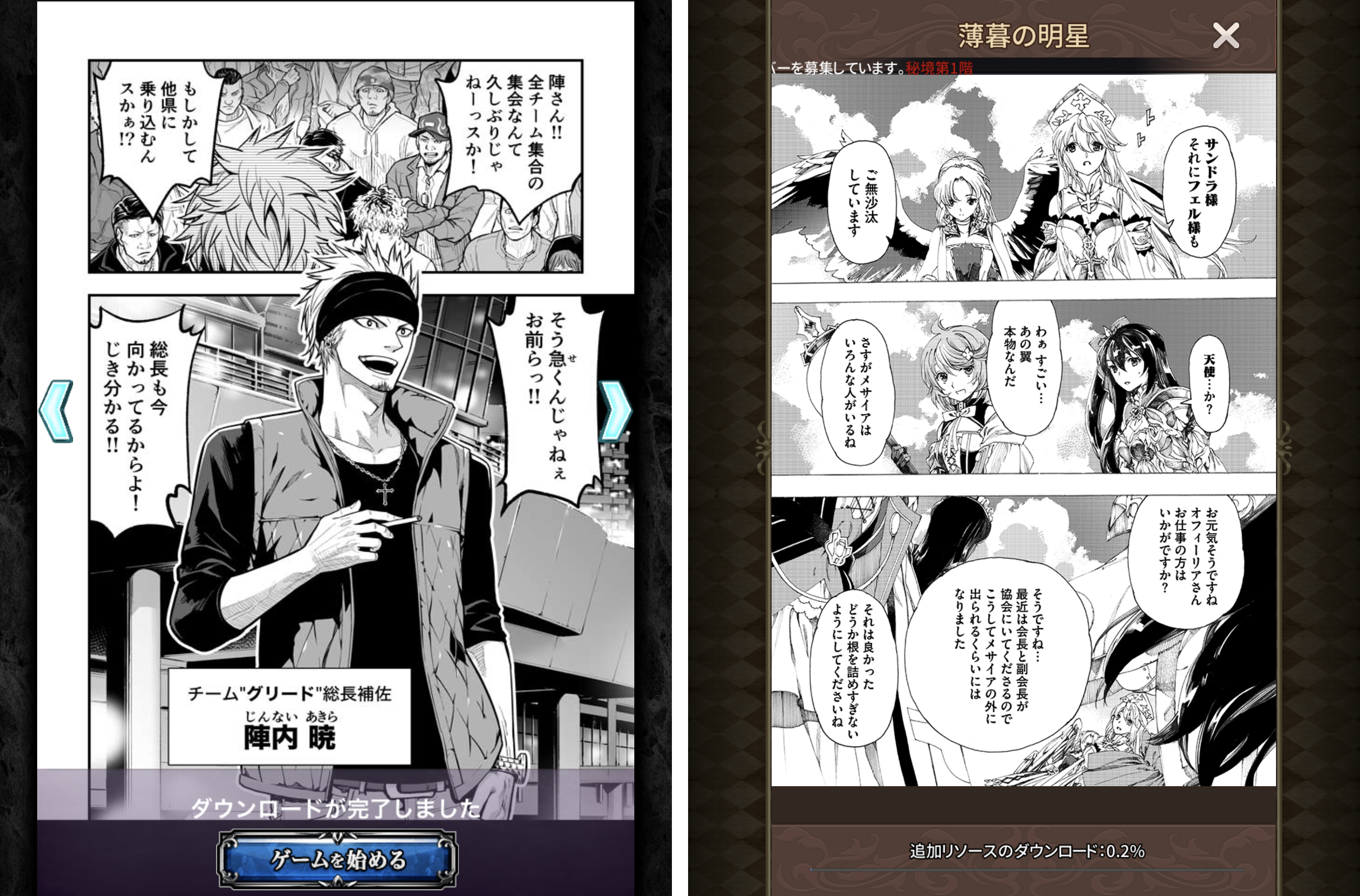 There is also an option for those who don’t want to play something simple but want to get to understand the background of the game. ジョーカー～ギャングロード～ (Joker Ganglord) and ロストディケイド (Lost Decade] give you a manga about the game to read while waiting for the update to download. 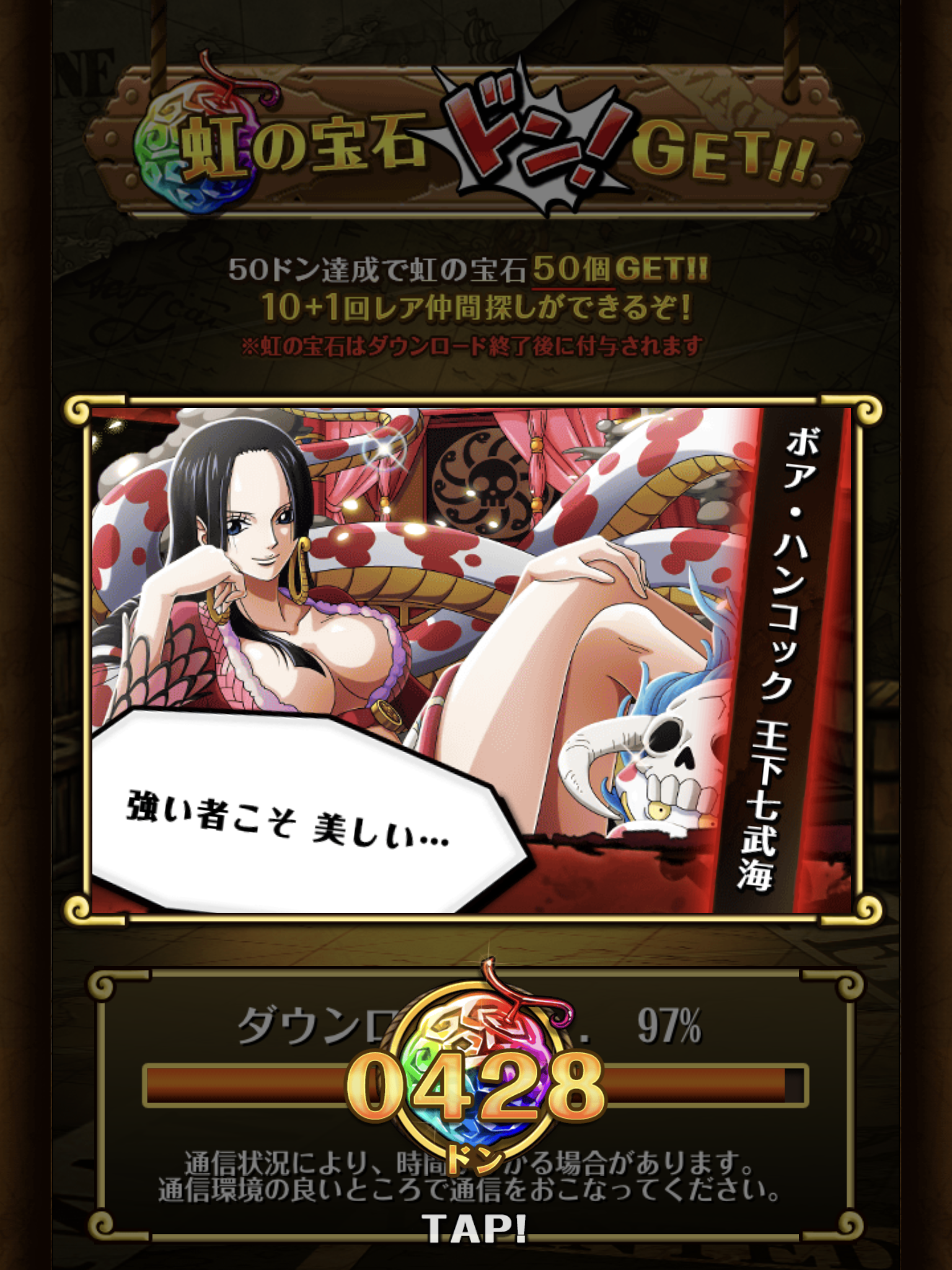 Download activity is something you can incentivize as well. In One Piece Treasure Cruise, during the initial download, you’re asked to tap the screen to get premium currency while the download is ongoing. If you keep tapping long enough, you get enough premium currency to pull 11 characters from gachas. In later updates, you’ll just get a visual representation of receiving premium currency as the download progresses, but without an actual reward.

Many Japanese RPG games are very meta heavy. You spend most of your time just upgrading your characters and spend only a small percentage of time in the actual core gameplay. If you’re a collector type of a player and want to occasionally just do some harder challenges, there is a system that lets you focus on upgrading your characters and leaving gameplay to the AI.

Yes, I know what you’re thinking, there’s some form of automatic gameplay in many games. But there’s also an enhanced version of it. In this system a new battle starts as soon as the previous one ends as long as you have the feature toggled on. RPGs like ブレイドエクスロード (Blade X Lord) and Final Fantasy Brave Exvius: War of the Visions have this kind of system. The former even offers an energy saving mode and recommends letting the game do a night grind while you are sleeping.

These were just a handful of exotic and innovative features we’ve come across during our analysis work. As I mentioned earlier, the actual impact of these features is open to speculation, but if you’re looking at data on how different features impact the games’ chances of success, consider reading our recent blog posts about communal mechanics or Battle Passes. And whenever you feel like studying mobile games data to fit your specific needs, the GameRefinery service is waiting for you!

Are you interested in finding data on mobile game features? Sign up for the free layer of our service here.

Five Mistakes to Avoid When Making A F2P Game