How is RAID: Shadow Legends mainly monetizing from a player’s perspective? To answer this question, we’ll take a look at what are the main things driving gameplay. In essence, what do you need as a player to continue playing the game and reach the” next level” so to say?

In this post, we’re going to take a look at the energy system of RAID: Shadow Legends and collecting/upgrading champions from a player perspective. In case you are interested in the full breakdown, you can see the full feature breakdown along with their implementation pictures within the GameRefinery service.

There are 2 things that are highly important in RAID: Shadow Legends to keep playing the game:

When playing the game, Dungeons and Campaigns do require a certain amount of energy, but the higher level they are, the more energy they need meaning that eventually, you will run out of energy quite fast. As a player, you can’t do too much with” daily energy,” and to do some grinding, you should have at least a few times the daily energy at your disposal.

This does bring us to the recurring events, which are usually related to grinding some Dungeons, leveling up champions, and so on to receive items, coins, skill books, etc. As you can imagine, this does consume quite a lot of energy, and you can easily run out of 10x your daily energy in a day if you’re using Multi-Battle mechanic, which allows you to grind the same level for 30 times in a single day. You have the option to purchase a one month or a six-month package that lets you increase the amount to 100 Multi-Battles, but you need a lot of energy for this, although it does allow you to achieve a lot of stuff.

Now, there are a couple of ways to refill your energy. For example, by:

But the best possible way is to purchase Gems or, for example, Limited time IAP offers that might have a combination of Gems, Energy Potions, or just pure energy along with other things. One thing that I love is the option to buy a one month gem pack that gives me a daily Gem pack that will provide an X amount of gems every day that I can use to buy Energy Potions to refill my energy.

One of the biggest things, and may I add, coolest things in RAID: Shadow Legends is the vast amount of different champions that come in the forms of Common, Uncommon, Rare, Epic & Legendary. And yes, of course, the more rare ones, are usually better than the ones that are not.

The champions each have their own affinity and faction. There are 4 affinitys in total, three of which are working against each other like “rock, paper & scissors,” one has an advantage over another, but is bad against another one. On top of this, there’s one affinity that is neutral compared to the rest and has no advantages or disadvantages versus other affinities.

If you want to have the best combo, for example, for Arena, Dungeons, Campaign, or Clan Boss’, you want to have a nice variety of different champions and as many top-tier champions as you can. The way you are getting these champions is to summon them with Shards, and there are four different shards you can use: Mystery, Ancient, Void & Legendary.

And while chasing the champions that you desire, from time to time, there’s a boosted summoning event that will increase the chance that specific Shards summon a Legendary champion, for example. Limited time IAP offers are there to help you, and you can purchase some Shards via these offers OR you can just use the normal shop to buy Shards. But I would say Limited time IAP offers are the best way to go. Gems also might help you with this, as on top of energy refills, you can purchase coins and Ancient Shards with Gems (see the first picture). 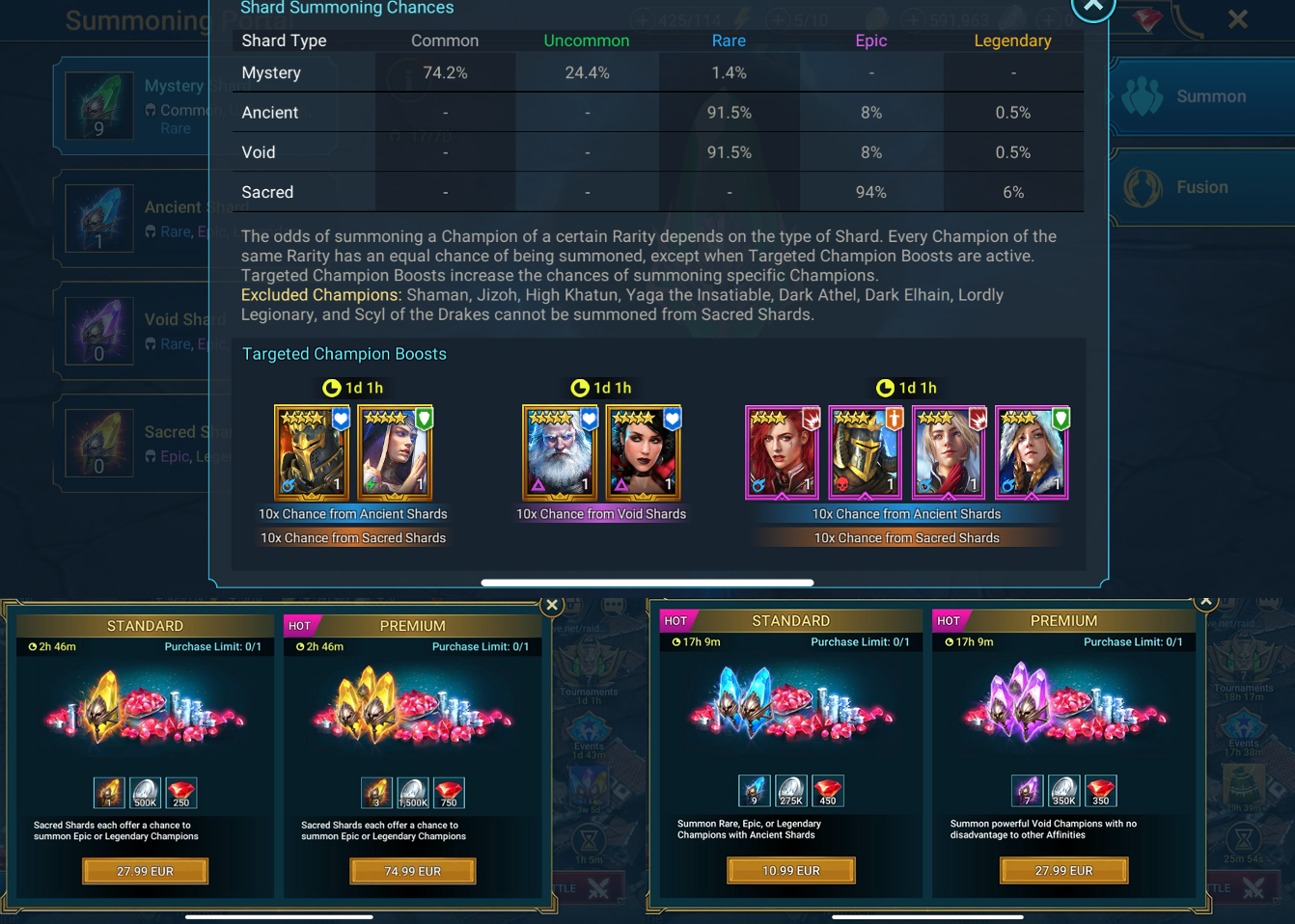 Or maybe you’ve been wise enough to save some of the best Shards for these events. Still, from personal experience, you (at least I) use them straight away when you get them from Dungeons, Campaign/weekly, monthly quests 🙂 You should, as a player, at least try to save these, because there will be summoning events. And you get more points the rarer the champion you manage to summon.

So, for example, to upgrade a champion from lvl 50 to reach the point where it CAN hit level 60, you need to sacrifice five champions of the same rank. When you upgrade this level 50 champion, it will increase the rank but drop to level 1, and you have to then level this champion to level 60, which is the level cap.

In RAID: Shadow Legends Legendary champions are, of course, the ones you’d like to get as a player because they are, in general, the most powerful and start from the highest level possible as well. But getting them is pretty rare. They do have a downside though; each champion can upgrade skills an X amount of times (depending on the champion) with a skill tome. There are 3 skill tomes; Rare, Epic & Legendary, which you can get from achievements, events, quests, etc. But where you can get 5x of Rare skill tomes with around 11€, one Legendary tome will cost you 28€.

You can also increase the champion’s stats by ascending them, which requires potions, and as you might guess, you can either buy them or get them from Dungeons. The higher you level the champion, the more potions you need, or you need to combine potions that cost more coins. Each champion also has its own affinity; therefore, each affinity requires a different primary potion because ascending is constructed as Affinity potion + Basic Potion. Luckily you can find some of these popping up as Limited time IAP offer. You can see these quite often since it’s pretty crucial because some champions can only upgrade or unlock skills if they have ascended to a certain level.

To have the best champions, you’ll need the best items possible, and the best way for you to get these are, of course, Dungeons. An items “power” is based on two things, rarity, just like with champions, but also stars that range from 1 to 6. You can upgrade these items with coins up to level 16, and this can get pretty expensive as the cost per level goes up with each level, and the probability to reach the upgrade goes down along the way. Meaning that you can spend all the coins that you received when you grinding and selling those items from Dungeons. Still, it’s worth it, as it will improve your champions quite a lot.

So when you run out of coins, you can sell some items in your inventory, buy coins with Gems, or from the shop with real money. But the best way is to grind dungeons, which brings us back to the first thing that we spoke about, energy 🙂 The hardest part is finding items that match your champion, meaning that the stats are beneficial for your champion – skill dmg, for example, can be based on defense stat or HP etc. depending on the champion.

Also, one point I’d like to mention is that the most rare items are tough to get, and the most straightforward way is to purchase a pack of 6, from Limited time IAP offers, once you see something fitting for you in the early game. Now, if you are in RAID: Shadow Legends’ mid or late game, item stats of the items are most important because they have the most effect on a champion’s power. So to get the best stats on high-level items, you should grind high-level Dungeons and do the Clan boss on a daily basis.

You are also able to increase the stats of your items with runes that you can get from Faction Wars, and you have access to 12 keys per day to beat different levels that cost a certain amount of keys. The higher the level, the higher level the glyph is that you can potentially get, and of course higher level glyphs increase base stats more than lower level ones. A good thing to mention is that you can stack these glyphs, so first use a level 1 glyph, then level 2, and so on.

Now, one last thing to add here would be masteries: upgrading those will give your champion a bit of boost, like increasing stats or giving you something extra like” Heals your champion x% whenever an enemy gets healed.” You mainly get these with scrolls from specific Dungeons, and to make it simple to understand the first masteries won’t require too many scrolls, but once you’ve upgraded those, you will need more scrolls. After reaching a certain point, you need to have different, more rare scrolls, and those do not drop as often and that does is also smaller. In total, there are 3 different scrolls, and the higher the dungeon level is, the better OR more scrolls you can get. To fully upgrade your masteries, it can take quite some time as you are running the Dungeon with x amount of champions, and you can’t really choose who gets those scrolls unless you’re already maxed out with some champions.

The easiest way to do this is to buy full scrolls with 900 gems, saves you a lot of time and energy, literally, as you don’t have to grind that Dungeon over and over again.

In RAID: Shadow Legends your progress as a player is heavily based on having enough energy to have the option to actually play the game and grind the things you need, in order to level-up your champions to increase their power. On top of this, as a player you want to have the best possible team that you can get by summoning them with Shards (Gacha).

Oh yeah, a good thing to mention that we’re not touching Battle Pass here to keep things a bit shorter, even though it does include quite a lot of the things we talked about here. The season just ended, so it’s going to be interesting to see how the new one is going to look!

Now, I did highlight quite a lot of Events and Limited time IAP offers in this article, but it’s with good reason when we take a look at Turn-based RPGs (iOS) in the US, as all of the top 20% of the titles have these features implemented in their games.

Now, if you are not interested in RAID: Shadow Legends, you can easily gain access to deconstructions of thousands of games with GameRefinery’s service and explore feature level data from individual competitors or exploring data on a genre / sub-genre level.

I definitely suggest you book a call with GameRefinery if you are interested in feature level data that will help you to identify the most important features & save a lot of your time when you’re designing your game or developing Live-ops. So feel free to connect with me via LinkedIn as I’m more than happy to have a chat with you!

Ps. Don’t ask how much money I’ve already invested in the game, because that number is quite high. I have to say that I have not regretted any purchase, as all the purchases have allowed me to proceed further and the way I planned to 🙂

Hit or miss – Will my new feature make the difference?