A couple of months ago we took a look at the Match3 market and RPG market to see what types of games are driving revenues there. In this blog post, we’ll shift our focus to mobile Sports & Racing games and examine how various games in this category are currently faring on the market.

Before we dive further into the data, it’s good to understand how we at GameRefinery view the mobile games market in terms of genres and game types. In order to classify games in a meaningful way, we take into consideration games’ feature-set, theme and defining mechanics, resulting in a three-layered taxonomy where every game is assigned into a one (and only one) i) Category -> ii) Genre -> iii) Subgenre. For example, Summoners War would go under Midcore -> RPG -> Turn-based RPG.

If you’re interested in reading more about the subject, check out our recent post about mobile game genres and classifications.

When taking a look at the category level (the highest tier in our genre taxonomy), we can see that the Sports & Racing category is quite small compared to other categories – for instance, it generates only a bit over 5% of IAP revenues in the US. 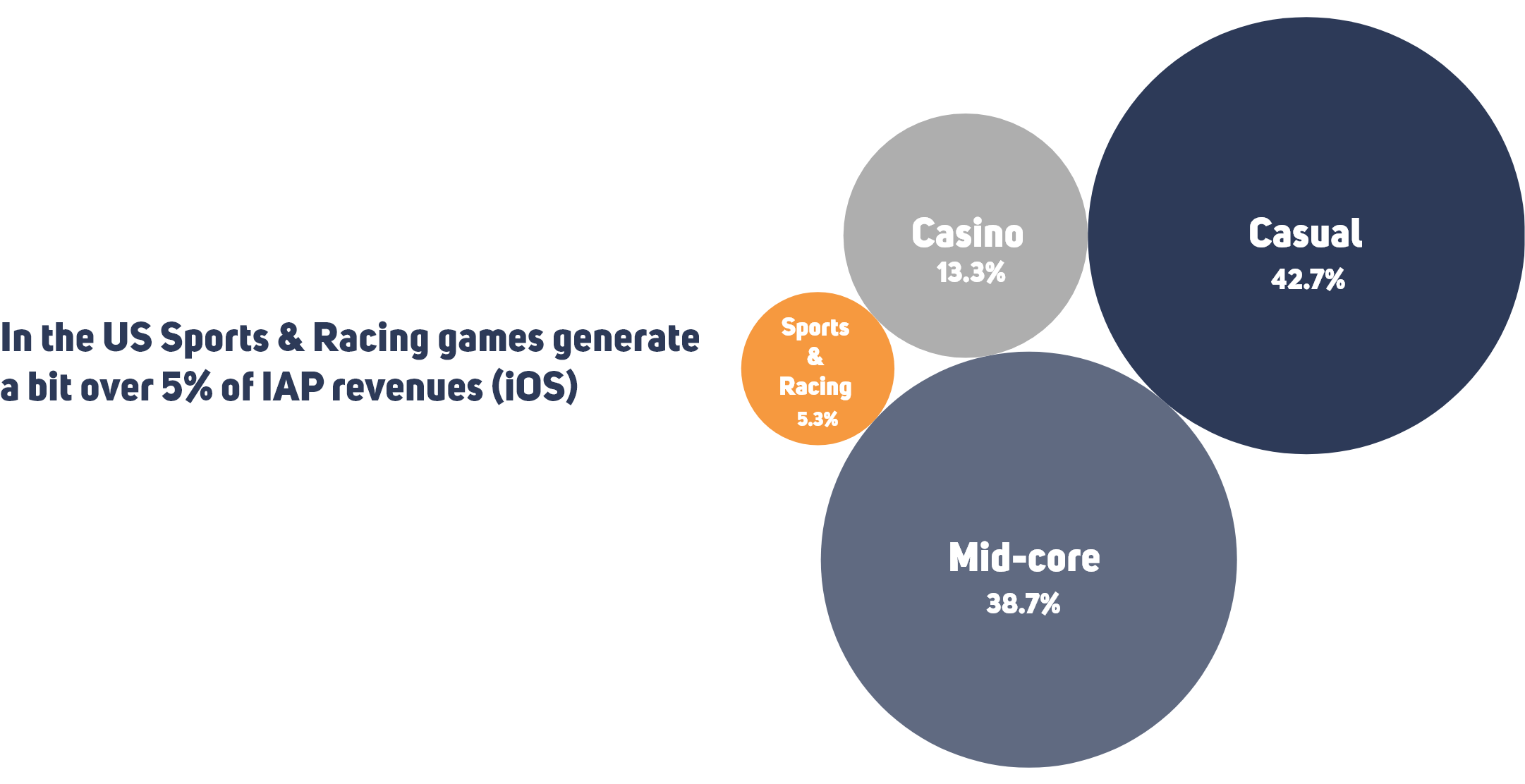 Let’s start our category overview by taking a look at how Sports & Racing games are doing in the “Big Three” markets – USA, Japan, and China.

The table below shows the number of different Sports & Racing subgenres currently in the top 100, 200 and 500 grossing charts in these three markets. Here games are classified into their respective subgenres: Licensed Sports/Racing games are characterized by their use of real brands (sports leagues, car brands, etc.), and Casual Sports/Racing games are based on actual sports but are not tied to any specific brands. These games are usually more casual than their licensed counterparts. 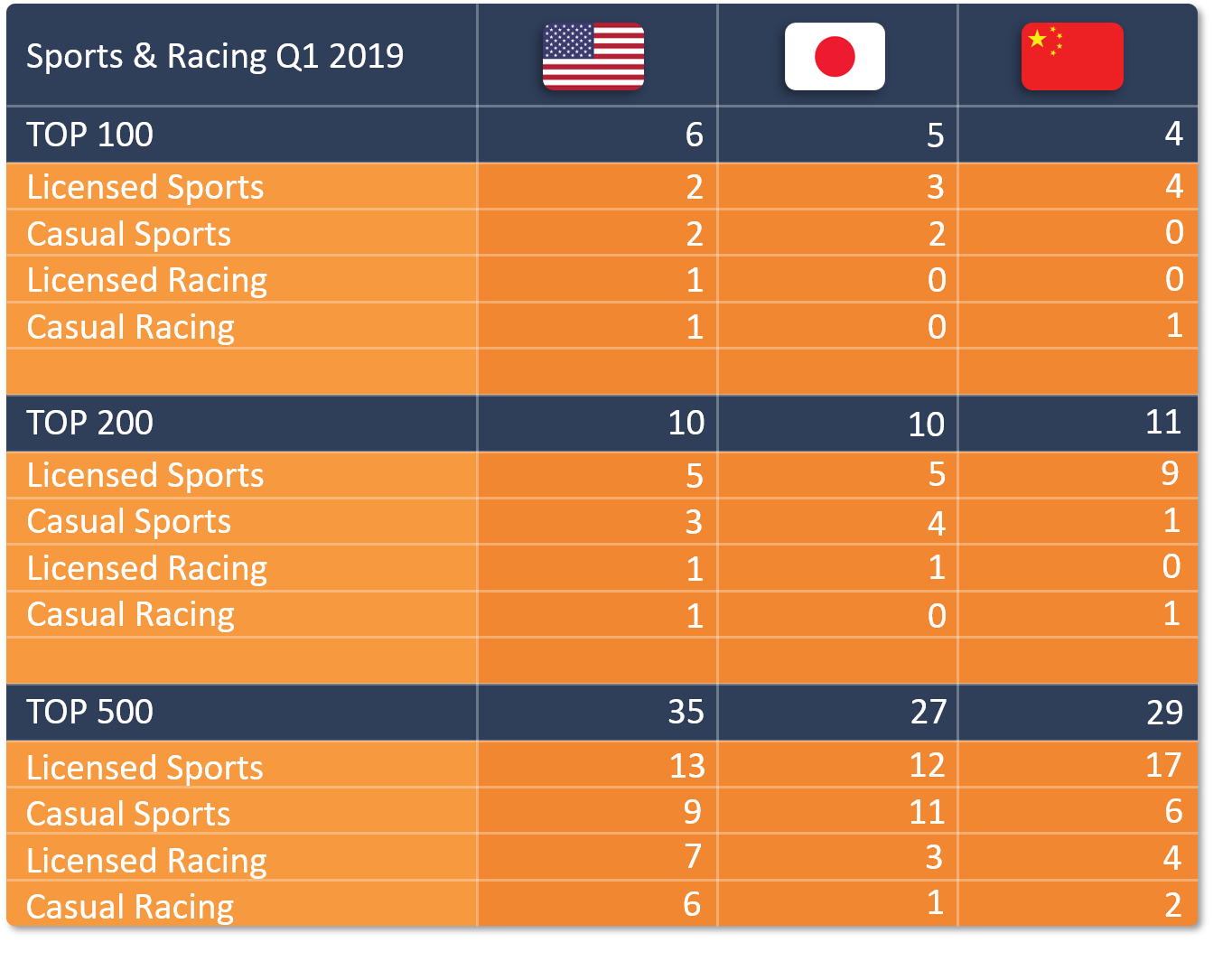 This data highlights some interesting points:

Next, let’s dive a bit deeper in each genre.

A couple of key take-outs from the tables above:

Now, let’s focus on the US market with our Market Share tool and take a look at which games are the “big hitters” and how the total market share of the genre is split between different games. The following table lists the top 10 biggest money-makers inside the Sports genre, together with their revenue share-%s (iOS US) during Q1 2019 and Q1 2018. 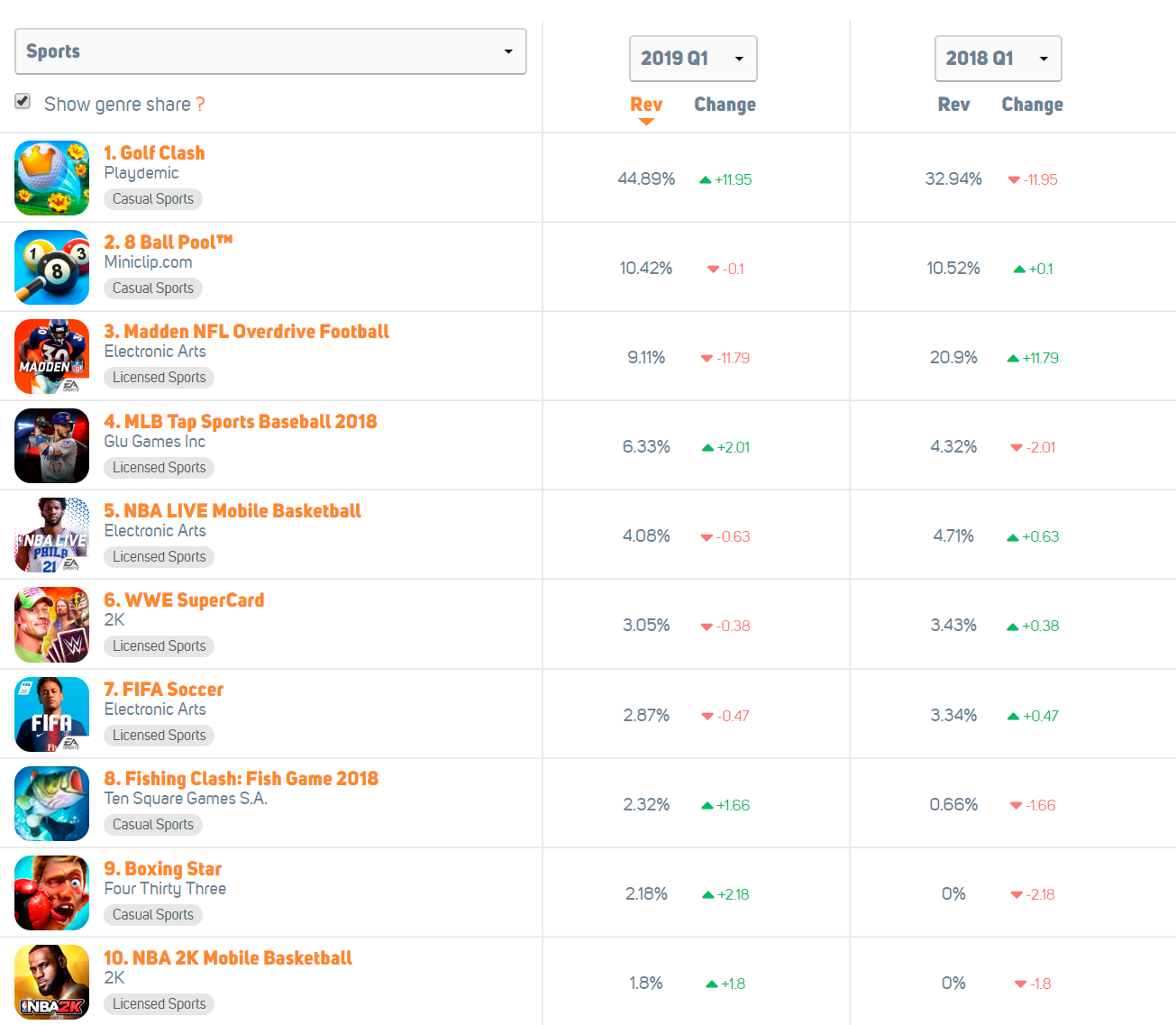 In terms of IAP revenue Golf Clash is in a league of its own in the Sports genre. It currently generates almost half of the whole genre’s revenues (44.99%). Gold Clash even increased its share by nearly 12% compared to Q1 2018.

Madden NFL is the market leader in the Licensed Sports subgenre, but when looking at the Sports genre as a whole, it carves up only a bit over 9% of the revenue. Last year was particularly challenging for Madden because its revenue share declined by close to 12% points. In other words, the huge “Overdrive” overhaul of the game wasn’t able to shoot revenues through the roof – at least yet.

When focusing on the top 10 performing Sports games, it’s quite interesting that there are only two new entrants in the whole genre during the past year – Boxing Star and NBA 2K Mobile Basketball. Boxing Star is FourThirtyThree’s reaction-based boxing game with a neat collecting meta that, for example, involves acquiring and upgrading your boxing gear. In the past, Boxing games have been a hard sport to crack in the mobile space, as there haven’t been any hit titles in the sport previously. Now Boxing Star has taken the market leader spot and is currently hovering around 200-250 in the top grossing iOS US.

The second newcomer in the top 10 sports games is 2K’s free-to-play NBA 2K Mobile Basketball. In the past, 2K Games has been focusing on premium NBA-titles, but now NBA 2K Mobile Basketball is looking to compete against EA more directly with its free-to-play model. Currently, EA’s NBA is still the king of the hill, but it’ll be interesting to see how the situation evolves in the future.

One more thing worth picking up is the baseball genre, dominated by Glu Mobile’s Tap Sports Baseball franchise. Glu is one of the last companies in mobile Sports games hanging on to a yearly title release practice. Their 2019 MLB revision released globally only just last month, and we expect it’ll take over the spot held by MLB 2018 (which has since been removed from the App Store after the launch of MLB 2019) shown here.

Now that we’ve pretty much covered the Sports genre, it’s time for the Racing games market. Let’s start by looking at the US market in terms of revenue shares: 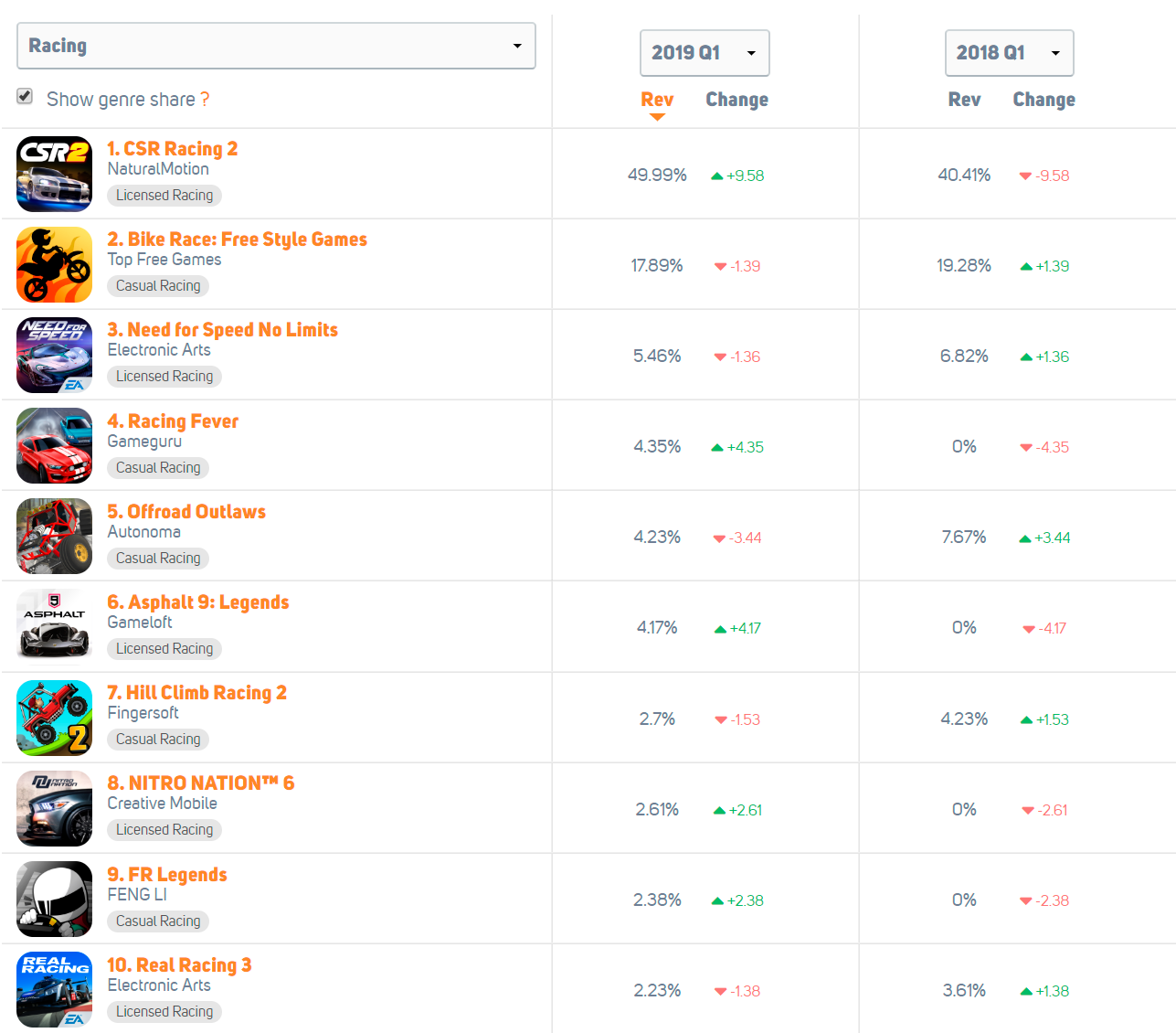 By looking at this table, it’s pretty obvious that CSR Racing 2 reigns supreme by generating almost half of the entire genre’s revenue. Despite being a couple of years old, CSR Racing 2 has been able to tighten its grip on the top position with a 9.5% point increase in its genre share compared to the previous year.

The only other racing game that is currently in the top 200 grossing is Top Free Games’ Bike Race: Free Style Games with approximately 18% market share and a clear leading position in the Casual Racing subgenre.

Compared to last year, there are four new entrants in the top 10 racing games, indicating that the Racing games market is a bit more dynamic compared to its Sports counterpart.

Market shares on a category level

To wrap things up, let’s compare market shares on the category level (i.e. combination of all Sports and Racing games): 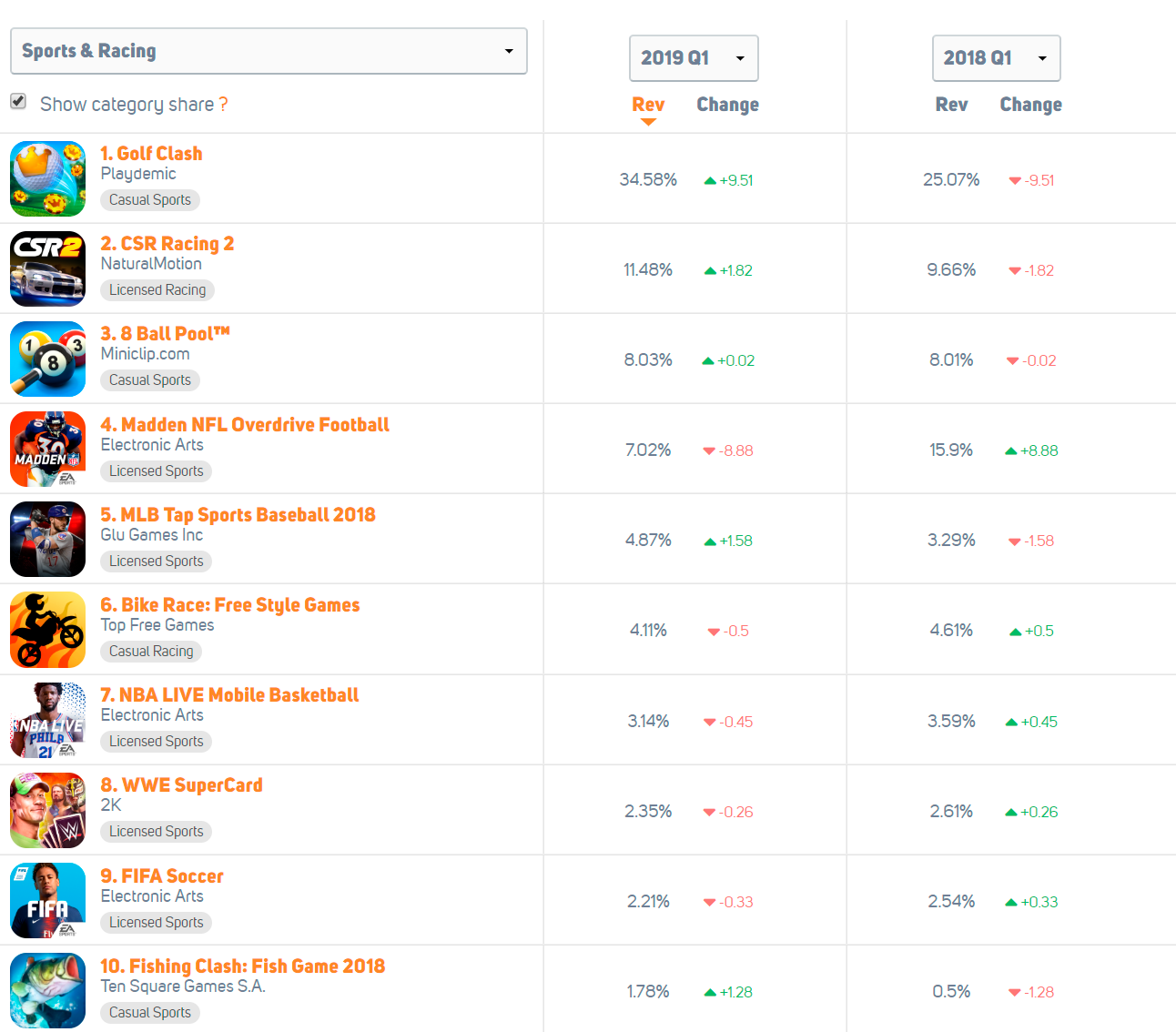 Here we see that Golf Clash is in a league of its own, as it rakes up over a third (34.58%) of all category revenue. CSR Racing 2, the market leader of the Racing genre, takes the second spot with close to 11.5% market share.

Madden NFL clearly had the most significant decline in market share over the past year, dropping from the second highest grossing position to fourth place in the Category.

When comparing Racing and Sports games in general, it seems that Racing is having a bit of a tough time, with only two of the top 10 games belonging to the Racing genre.

Both Sports and Racing genres are currently dominated by a single title that generates nearly half of the respective genre’s revenue. “Kings of the Hill” Golf Clash and CSR Racing 2 are both older titles that have dominated their market segment for a while. Despite their maturity, their success shows no signs of slowing down – on the contrary – as both titles strengthened their top dog position over the past year.

When looking at the near future of the Sports & Racing category, the highest expectations undoubtedly rest on the shoulders of Nintendo’s Mario Kart Mobile, planned to be released later this year. Backed up by a hugely popular IP, it just might disrupt the market the way QQ Speed, a similar karting game, did in China.

Interested in doing market research of your own? Try the free layer of our service here

7 Incredible Game Design Examples And Why They Work