Western developers/publishers continue to make efforts to find the right partner or strategy to crack into what is now the worlds largest market for mobile games. While a few have succeeded through the right partnerships or sheer brute force, most Western games fail in China. However, that is not even the biggest hurdle, as potential Chinese partners reject the vast majority of Western games that are submitted.

As an industry, we are aware of the difference in player preference between Chinese and Western consumers. Most often, it relates to elements such as art, theme, and genre, but we’ve never attempted to view these differences through the optics at a quantifiable level.

At GameRefinery, we can break down these differences at the game feature/mechanic level, as we track over 300 different features on over 1,600 of the top grossing games, including China. For this analysis, we will tighten our scope to just the top 100 grossing games in the App Store between USA and China, which produces more than enough statistically quantifiable results.

Of course, there is no single answer on how to succeed in China; there are always exceptions and outliers. Even being in the top 500 in grossing can still result in success for a lot of Western developers looking to bring their games to China. However, by looking at what is succeeding, it gives us a better comprehension of the stark differences in consumer preferences between China and the West. 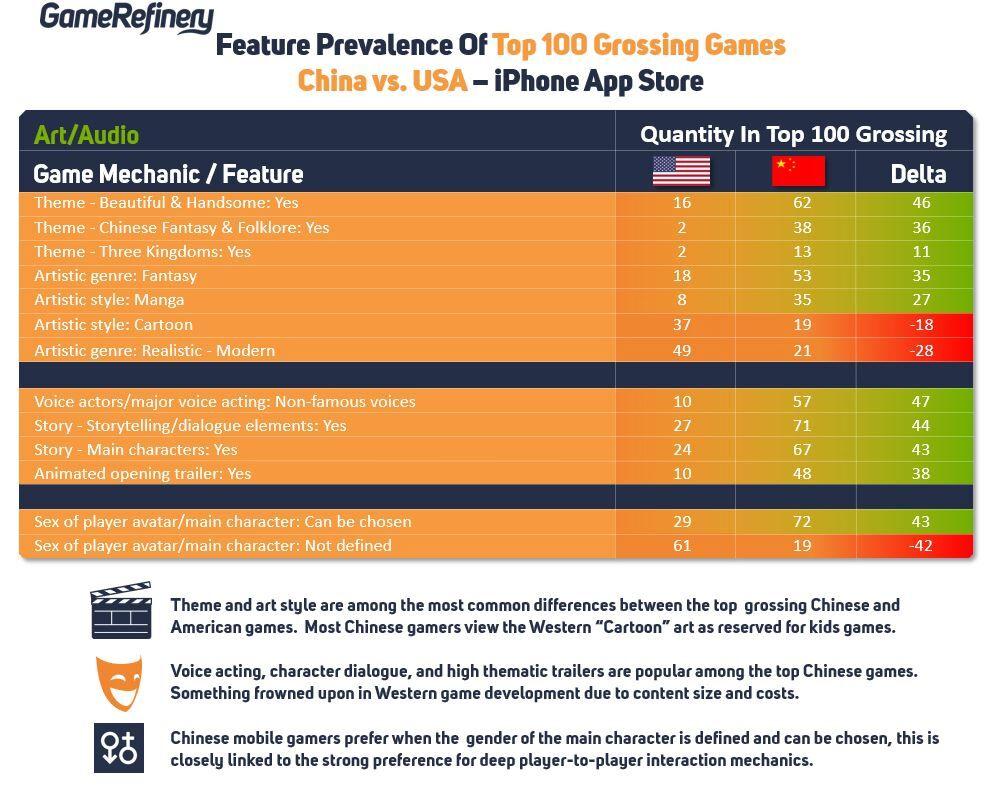 The most obvious differences have to do with game visuals and audio. Chinese Fantasy, Beautiful & Handsome, and Three Kingdoms make up the overwhelming amount of the game themes in the top 100 grossing. GameRefinery gives criteria for each category specifying what does count and what doesn’t. For instance, a game has the Beautiful & Handsome theme if its important characters are all handsome men or beautiful women – also referred as bishônen & bishôjo in Japan – and the intention is that the characters are sexually appealing. Marvel: Contest of Champions fulfills that criteria, but something like Game of War: Fire Age wouldn’t count because even though the tutorial is given by a beautiful woman, the troops in the actual game are not depicted as particularly appealing.

In terms of artistic styles, Fantasy and Manga make up the majority of the games in the top 100 grossing. Conversely, Cartoon and Realistic – Modern art styles are far less prevalent in the top 100 when compared to the USA.

Interestingly, voice acting and opening trailers are incredibly popular in the Chinese mobile market, which leads to massive bundle sizes and are usually frowned upon in the West to stay under the over-the-air download size limits. Additionally, these features tend to be a content furnace, meaning their life span of use in a game is short. Western developers prefer to create content that can constantly be re-used, sometimes through the entirety of the game, in order to reduce production costs and time.

Full control or no control 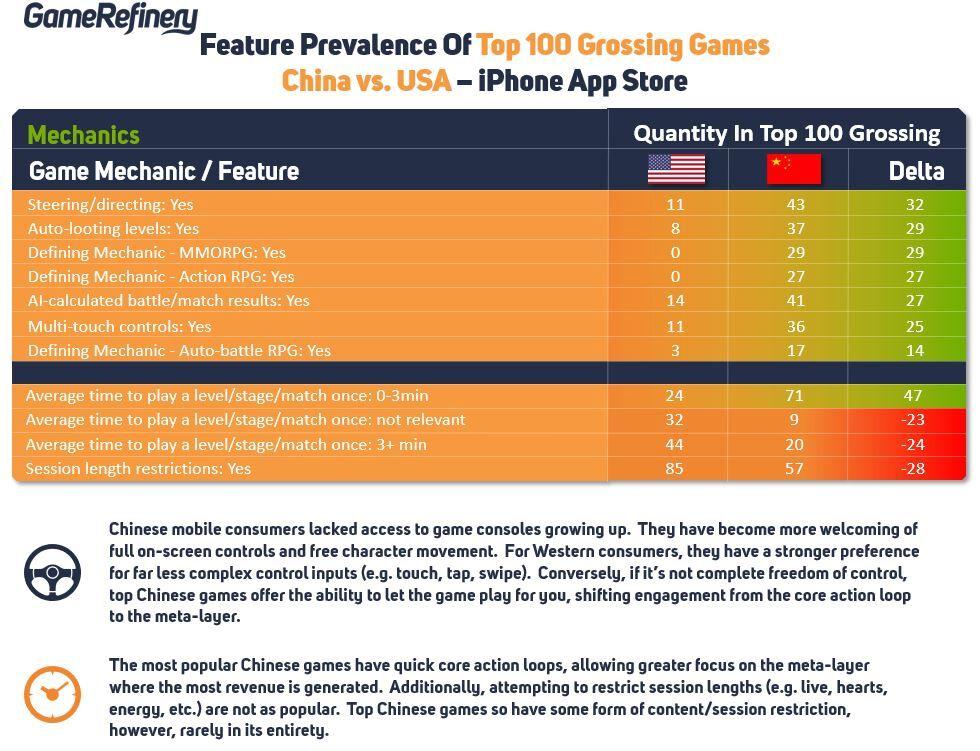 For a player base that lacked the luxury of having game consoles, Chinese consumers were more apt to the acceptance of multi-touch and free character movement controls on their portable devices. For the West, this is starting to catch on, especially with the rise of Fortnite and PUBG on mobile, but the overwhelming favorite remains single touch controls.

Conversely, if they aren’t given higher freedom of character movement, Chinese gamers prefer no control whatsoever in the form of auto-battling or auto-looting. This is often introduced to the player in the late stage of a game as to shift focus to the meta-layer, where most of the monetization occurs.

Successful Chinese mobile games have evolved faster than other regions with regards to a game’s meta-layer. In the West, we first focus on the core action loop. Via prototyping or internal game jams, we want to prove that the base game is “fun.” In China, developers prototype the meta-layers first, such as leveling up, fusing items, unlocking new characters/features, social interactions, etc. Once a core meta-layer is proven, they wrap a game around it.

Chinese developers have also changed how they handle restricting session lengths. At first, the ability to restrict session lengths (i.e., losing lives when failing a level) was a primary monetization mechanic in the industry. From a game designer’s perspective, it was a two-for-one win as restricting session length was initially intended to limit content consumption. By the game’s inherent design, allowing for unlimited play would create a scenario where users are consuming content faster than it can be produced.

The top Chinese games tackle this problem directly. Instead of restricting session lengths, they restrict content consumption. The game may halt or slow down your progress, but they rarely restrict the player from having some meaningful interaction with the game. Restricting session lengths are far less prevalent in China by nearly 33% among top grossing games. Allowing for some form of unrestricted interaction is where popular Chinese games are far more evolved than Western developed games. 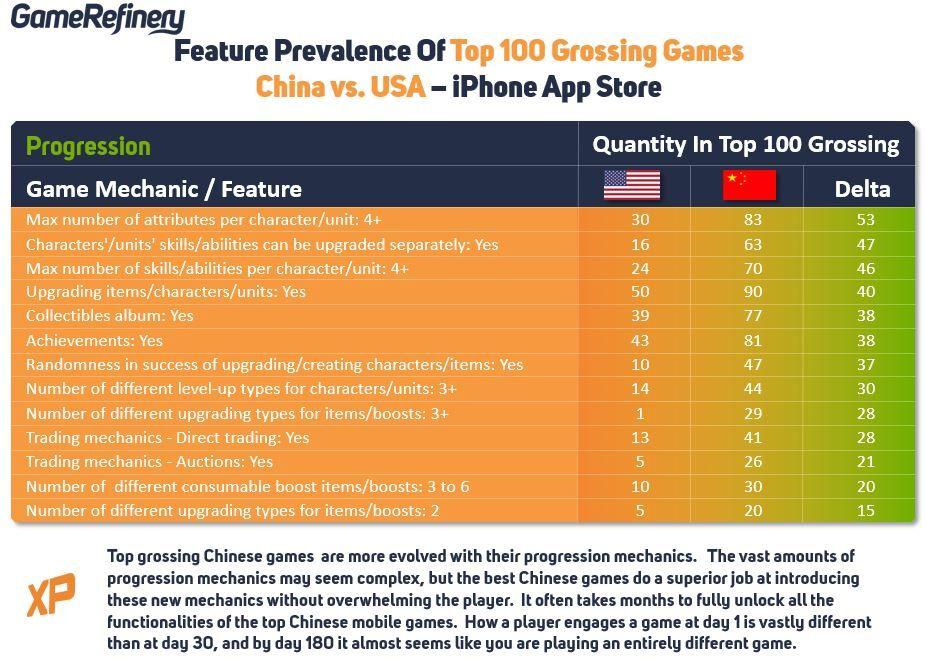 Top grossing Chinese games are also more evolved with their progression mechanics. The vast amounts of progression mechanics may seem complex, but the best Chinese games do a superior job at introducing them without overwhelming the player. It often takes months to fully unlock all the functionalities of the top Chinese mobile games. How a player engages at day 1 is vastly different than at day 30, and by day 180 it almost seems like you are playing an entirely different game. 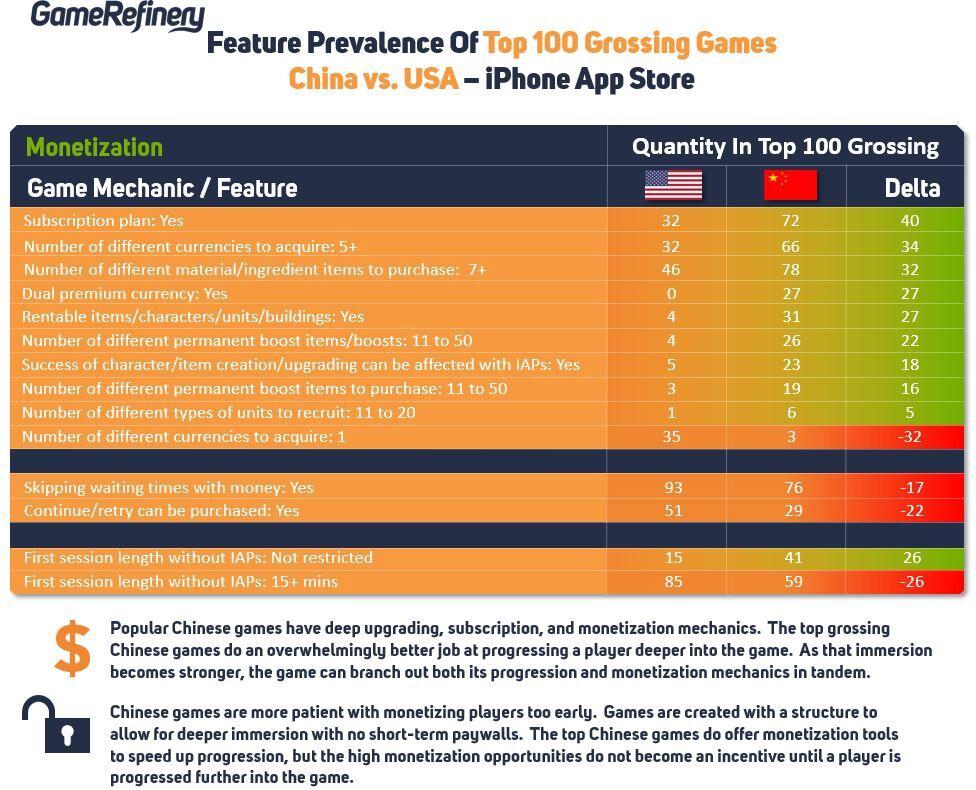 All great mobile games have multiple upgrade, currency, boost, and item systems, but the top Chinese games take it to a far deeper level. The key to success for the top Chinese games is how efficient they are into easing players deeper into the game. It never feels overwhelming and new mechanics are introduced slowly over time.

Chinese games are also more patient about monetizing players. Games are created with a structure to allow for deeper immersion with no short-term paywalls. The top Chinese games do offer monetization tools to speed up progression, but the high monetization opportunities do not become an incentive until a player is progressed further into the game. 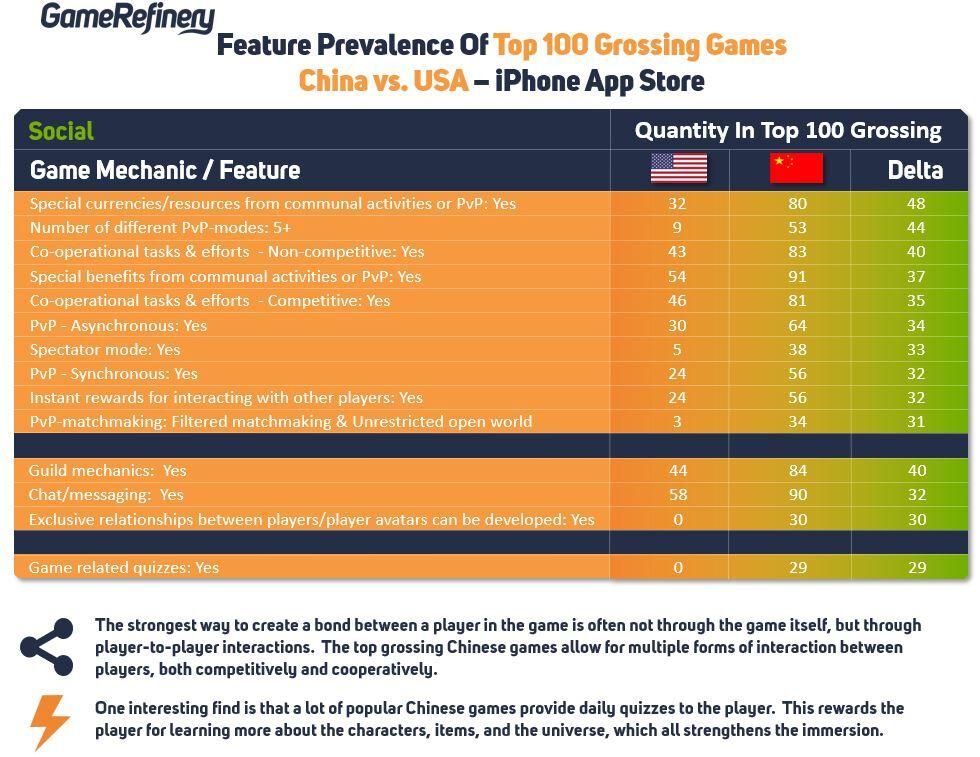 Top Chinese games integrate deep social mechanics. Multiple PvP/PvE modes, guilds/clans, co-operative tasks, chat, and spectator mode are just a few of the social game mechanics that are far more prevalent in top Chinese games compared to the West. If it’s not the deep progression and monetization mechanics that hook you into the game, it’s the social bonds you create with other players, either competitively or cooperatively.

One unordinary retention mechanic in Chinese MMORPG games that is currently absent in top Western games is providing rewarded daily quizzes to your players about the game. From a game designer’s perspective, it’s an educational mechanic to build the player’s knowledge about the game, which can help reduce overwhelming the player as the game drags you deeper into newer items, characters, mechanics, etc.

One classic example, outside of games, was the Pokémon television series, a universe with an ever-growing character list. Just before a commercial break, the show would display a silhouette of a character and ask the audience to name it.

The primary purpose was to ensure the audience member watched the commercials, but it actually served a much better purpose. It educated the audience of new characters through reinforcement, which helps immerse the audience deeper into the universe and strengthening brand recognition.

Infograph: What The Top 100 Grossing Are Doing Others Are Not