What is the very first thing that comes to your mind when someone mentions China and mobile games in the same sentence? Assuming you’re at least somewhat familiar with the topic, you’re bound to address the fact that the market is dominated by heavyweight RPGs while casual games fail to reach the same level of popularity. Indeed, it is difficult to shoot down this argument as, for example, the current top 20 grossing list in China includes 15 games that more or less fall under the RPG-umbrella. And oh boy not just any RPGs; these games offer tons of content, variety of options to socialize and, of course, a deep metagame-layer.

In fact, if you don’t know what to expect, the amount of menu bars and other fuss filling your screen in these games can cause epileptic seizures to the faint of heart. More is definitely more in China and that applies to mobile games as well, as the photo below hopefully illustrates. 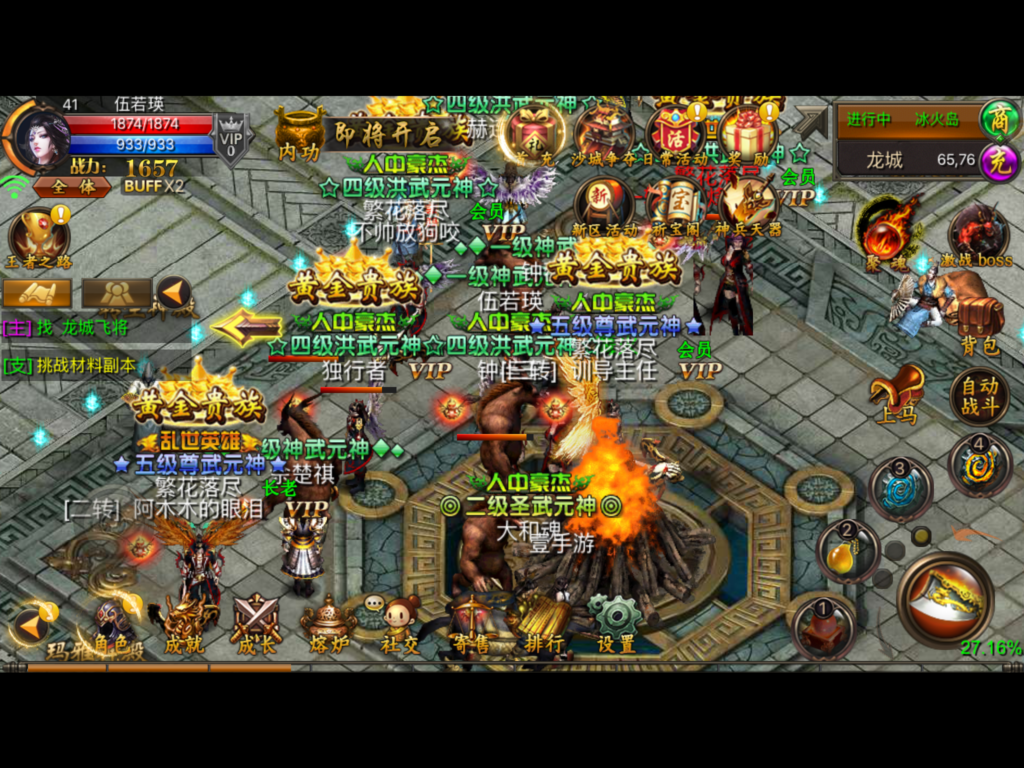 As meta gets to shine in the limelight, the role of core gameplay is often restricted to merely statically display the outcome of players’ metagame decisions. This arrangement has led to a sprout of instruments to automate, speed up and skip the core.

Traditionally, at least in the West, hardcore players have generated a great amount of hate towards autoplays with them been bashed as “game-killers”, even in the mobile scene. Dissing automation mechanics outright for disgracing games is one way to look at things, but one can also try to see them as tools that give players more time and resources to focus on the meta-side of things, which play a huge role in Chinese games.

While Western gamers have been rather reluctant towards adopting these mechanics, the Chinese players seem to be more open-minded in this regard. If you pick up a random game in the current top 100 list in China, chances are you’ll find automation mechanics implemented in the game somewhere. Narrow  your search even further to include only RPGs and strategy-oriented games and you can be almost certain to find that autoplay button somewhere. Some might be surprised to hear that it is these hardcore games that have been on the frontline in embracing automation mechanics, but then again for example MMORPGs often rely heavily on grinding similar content again and again. For many players having some of that automated can actually be a relief.

So, let me then give you a short introduction to a couple of related and trending features in China that we track here at GameRefinery. Some of the below mentioned mechanics have already found foothold outside the Chinese market while others are still rather China-specific. In any case, it might be worth the effort to put these on your radar, especially if you have any plans for taking your game to China.

Some love it, others curse it from the bottom of their hearts. Turn it on and the game will automatically grind the game for you. Some variation of an autoplay-mode can be found in most of the top-grossing Chinese RPGs and their implementation can be very pervasive. For example, it is not uncommon for players to have access to all the same menus during battles that they would outside the fights. Hence, while your party is kicking orc-ass in autoplay, why not go forging that new sword or auction off some loot? Usually autoplay-option can be unlocked after reaching a certain level of progression but an early access can be granted for those willing to put some real yuan on the table.

These essentially Chinese features reward players even for their time off the game via mechanics such as offline autoplay and offline experience. The former allows players to send characters to e.g. complete tasks or gather resources even when the application is closed, whereas the latter grants players explicit benefits according to the length of their offline time. While handing out rewards to players for not playing the game might seem counterintuitive, the trick is that these systems are often restricted e.g with a time-cap; thus players have an incentive to get back in the action regularly in order to reap the most benefits out of the system.  See, it works as a retention mechanic as well!

Usually combined with autoplay, speeding up the core game gives players even faster progression. Commonly players can e.g. speed up to double-speed through normal gameplay, but going for triple-speed requires a high-enough VIP-level. Some games allow players to even skip certain battles altogether, but unlocking a boost as effective as this often requires a hefty time or money investment.

A common sight in games with distinct levels/stages. Auto-looting makes all that grinding a lot more bearable as already completed levels can be “rerun” with a touch of a button.  Popular ways to monetize this feature include restricting its use with purchasable “raid-tickets” or requiring a fancy enough VIP status.

We all know how exciting it is to login every day to complete those daily tasks that take you to the grand endeavour of collecting 5 different flowers from the magic forest. After the novelty of these quests wears off, some of us might start thinking about all that time wasted in the process of taking care of them. Luckily, missing the tasks is not the end of the world in China, where rewards from missed events can be retrieved with in-game purchases.

To Wrap Things up:

So there you go! As always, if you have any questions about this particular blog post or would like to know more about our service in general, feel free to drop us a line. P.S. Also make sure to follow our Twitter and Facebook accounts to stay on top of all things mobile games.